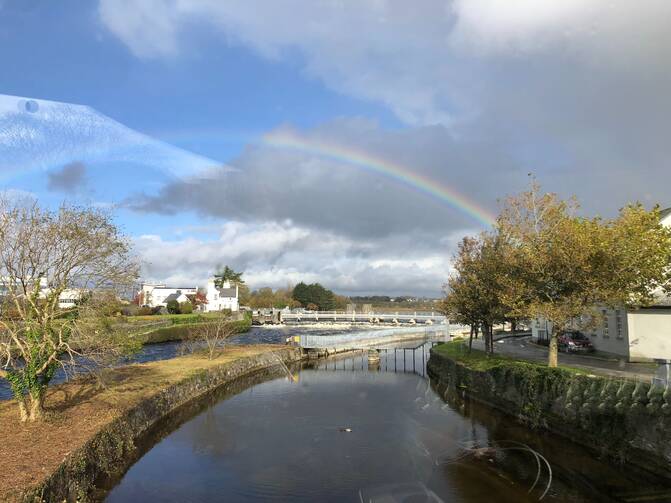 Matt Malone, S.J., led a pilgrimage to Ireland for America readers during October. What follows is the text of the homily he delivered during a Mass at St. Ignatius Church in Galway City. It has been edited for length.

Eight years ago this spring, I stood at the one intersection in Ballinamore Bridge, County Galway, Ireland. The town—a hamlet, really—is named for the ancient stone bridge that spans the stream there. There’s a chapel, a pub and little else. From there, a century ago, my great-grandfather set out for the United States. As I stood in that tiny, aged place, I thought of his courage and the sense of awe he must have had when he first caught sight of Manhattan. From Ballinamore Bridge to the center of the world!

James McHugh was a pilgrim. How fitting, then, that his great-grandson should join a religious order founded by a pilgrim, St. Ignatius Loyola, the one for whom this church is named. Every Christian is on a pilgrimage, of course, a traveler between the already and the not yet—on a path marked out by our forebears and yet uniquely ours. But the sons of Ignatius are a particular type of pilgrim, something more like James McHugh. Jesuits are always getting thrown out of this place or that. Over the years, we were thrown out of Spain, for example, more than a dozen times. Why? Hard to say, but I think the Lord hints at the reason in the Gospel. In a world beset by sin, oppression and injustice, there is nothing more threatening than faith, hope and love. Evangelists are destabilizing forces.

Whatever the reason, the Jesuits have had their ups and downs, including here in Galway City. We first came here in 1620, the same year those other pilgrims landed at a certain rock on the South Shore of Massachusetts. In 1645 the Jesuits built the first school in the area. Throughout the 17th and 18th centuries, they were banished and invited back into Galway on too many occasions to count. Finally, in 1859, the bishop of Galway invited the Jesuits to start a college and a church here.

What sustained the Jesuits through these trials—through the fickle vicissitudes of history? Well, it is the very same thing that gave James McHugh the courage to leave Ballinamore Bridge. In a word, hope. In a sentence—one with which you are surely familiar—it is the hope born of the belief that God can truly be found in all things. This faith is the heart of the pilgrim, every pilgrim, the pilgrim’s modus operandi. Faith is our yes to what we know; but even more, it is our yes to what we don’t know—to all that is to come. It is the perduring belief that whatever happens has within it the power to call forth from us a deeper response to God and to one another.

This place speaks to such a faith—this island, bounded by the horizon, the beyond, the future: what Shakespeare called "the undiscovered country." This is why the pilgrimage of the church, the church herself, has so often been symbolized by a boat. We call it the Barque of Peter, for example. As at sea, here at the altar of the Lord the past and future converge and become radically present. We encounter the God of the here and now and the God of what lies beyond the horizon.

While the real presence in the Eucharist is the presence of God in Christ par excellence, God’s presence is not restricted to the Eucharist. “The world is charged with the grandeur of God,” the Jesuit poet Gerard Manley Hopkins wrote. The faith of a pilgrim is that God can be found in all things—in all things past, present and future. Most often we merely glimpse a trace of that presence, but there are moments when the experience is more profound and the memory lingers.

How grace transcends conflict in ‘West Side Story’ (and beyond)
Matt Malone, S.J.

A statue of George Washington in London reminds us that all empires fall
Matt Malone, S.J.

There is a clear example of this in the work of Eugene O’Neill, the Irish-American playwright. In “Long Day’s Journey Into Night,” Edmund Tyrone recounts an evening at sea, when “I became drunk with the beauty and singing rhythm of it, and for a moment I lost myself—actually lost my life. I was set free! I dissolved in the sea, became white sails and flying spray, became beauty and rhythm, became moonlight and the ship and the high dim-starred sky! I belonged, without past or future, with peace and unity and a wild joy, within something greater than my own life, or the life of Man, to Life itself. To God, if you want to put it that way.”

Edmund’s pilgrimage is also the journey of James McHugh, the journey of the Jesuits, the journey of every pilgrim—stumbling toward nowhere, yet somehow crazily convinced that there is no such thing as nowhere. That beyond the sea, beyond the horizon, there is, there must be, a somewhere, a place made somewhere by grace.

By God, if you want to call it that.

I hope I can add one of my Irish poems here:

From Oklahoma to the Emerald Island

Thanks a million to you from me!

P.S. What’s a fella to do
When her hair is black
And her eyes are blue?