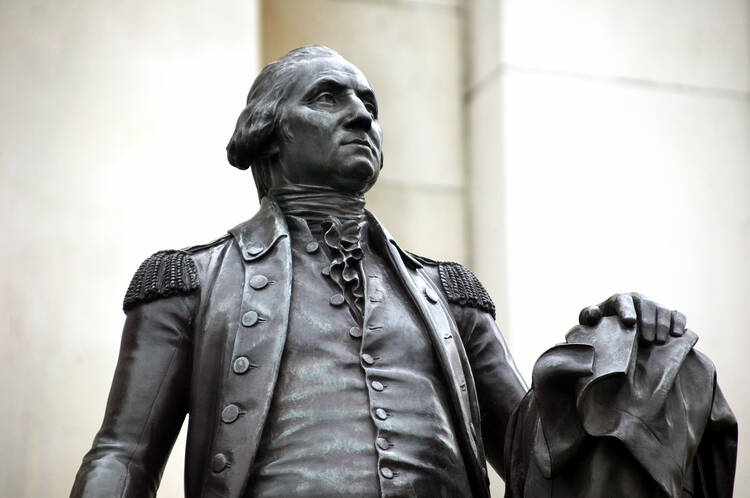 Sometime in 1921 the good people of the Commonwealth of Virginia decided to present this statue to the people of the United Kingdom of Great Britain and Ireland. (iStock)

Sometime in 1921 the good people of the Commonwealth of Virginia decided to present a statue to the people of the United Kingdom of Great Britain and Ireland. That’s what the sign says.

Whom does this statue depict? The English virgin queen, Elizabeth I, perhaps, after whom the commonwealth is named? No. How about Sir Walter Raleigh, an early English explorer of Virginia? No. Rather, the statue depicts George Washington, the first president of the United States and conqueror of the first British Empire. An odd gift, indeed, which makes one wonder whether Virginians might have been doing all this with their tongues planted firmly in their cheeks.

Rather, the statue depicts George Washington, the first president of the United States and conqueror of the first British Empire.

What’s even more bizarre, however, is where the British elected to display this statue of Washington: in London’s Trafalgar Square, the busiest, most popular public space in the city. More to the point, Trafalgar Square, you will recall, celebrates the greatest naval victory in British history, that of Admiral Horatio Nelson against a much larger French fleet off Cape Trafalgar during the Napoleonic War of the Third Coalition.

I can’t imagine Nelson would approve of sharing his square with Washington. He once said that sailors “must consider every man your enemy who speaks ill of your king; and...you must hate a Frenchman as you hate the devil.”

All this left me scratching my head as I stood in Trafalgar Square recently. I mean, George Washington was a traitor according to his British contemporaries; and I suppose by Nelson’s definition, he technically still is. Moreover, General Washington defeated the British during the American Revolution only with the substantial help of the French Navy, whose defeat Trafalgar Square celebrates. The French blockaded Yorktown, in Virginia, preventing the British General Charles Cornwallis from receiving reinforcements and forcing him to surrender to Washington. The rest, as they say, is history.

So what in the world is this statue doing here? One possibility is that it is simply an expression, albeit an awkward one, of the sense of solidarity between two peoples who forged a bond in the world war they had just fought together. And perhaps the Virginians and the British both did all this with a wink and a nod, appreciating the irony, perhaps even reveling in it. Still, it’s hard to imagine that Americans would place a statue of Lord Cornwallis or King George III in front of Independence Hall. Somewhere, perhaps, but not in a place that is such a focal point for the nation’s pride.

So, in a strange way, this statue of Washington, which was permitted by an excess of imperial pride, now serves as a symbol of the humbling inflicted by the vicissitudes of history.

My best guess is that our British friends probably didn’t give it much thought and they didn’t feel threatened. They could erect a statue of the man who destroyed the first British Empire because, in 1921, they were enjoying the fullest extent of the second British Empire, the one, they were told, on which the sun never set.

Yet the sun did set. So, in a strange way, this statue of Washington, which was permitted by an excess of imperial pride, now serves as a symbol of the humbling inflicted by the vicissitudes of history.

There is a lesson in that. While half of our country is supposedly making America great again and the other half is busy tearing down statues, literal and figurative, we would do well to remember that the eventual decline of U.S. power and influence is as inevitable as death and, of course, taxes, those infamous levies that led us to revolt in the first place. I’m not one who thinks the demise of the republic is imminent, mind you, but it is inevitable. History tells us so, and it would be sheer hubris to assume otherwise.

Why we published an essay sympathetic to communism
Matt Malone, S.J.

So whose statue should we add in Philadelphia if we want to follow the British example? I don’t know. But like this one in Trafalgar Square, whoever it depicts should serve to remind us that there is, in the end, only one king, the King of Kings, and that the fortunes of a people can rise and fall as quickly as the tide.

Too bad Nelson of Trafalgar isn’t around. He knew a lot about tides, literal and otherwise. You’ll recall that he died at the battle of Trafalgar, struck down by a French marksman. Among his last words were these: “Now I can do no more. We must trust to the Great Disposer of all events and the justice of our cause.”

Would that all people and nations did that more often.

Great essay. Reminds me of the Catholic celebrations of the 500th anniversary of the Reformation -- except our demise isn't inevitable!

Great essay, for sure. "Where are kings and empires now?" is the beginning of an old hymn, and it's a good question for Christians to ponder. Any national identity is subordinate to the Kingdom of God. (BTW, recent history suggests that Nelson may have been killed by friendly fire, a painful irony if true.)

Three things:
The Americans did not defeat the First British empire. The British abandoned the colonies because the Caribbean and India were more economically important. The empire was expanding.
The French won our Revolutionary war for us as it was Rochambeau’s troops at Yorktown that pinned the British army against the French fleet as Washington’s troops helped but essentially looked on.
I suggest a statue of Marx in Philadelphia if the United States should fall. We have a living account of how it is proceeding as the youth abandon freedom.

Philadelphia would be the appropriate place for the statue as it was the most vibrant city in the Western Hemisphere in the 1750’s. It was the capitol of the poor man’s country, Pennsylvania, where any common person could become prosperous. But is now symbolic of how we have fallen by what Benjamin Franklin’s university has done to Amy Wax.