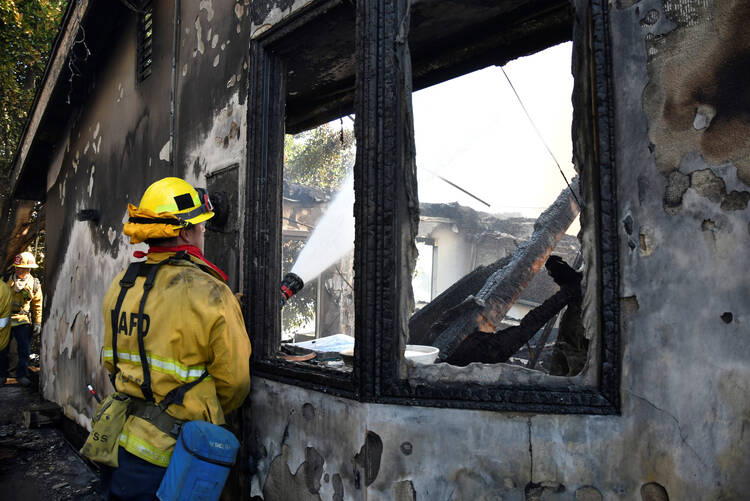 A firefighter douses water on a house after it was burned by the wind-driven Getty Fire outside Los Angeles Oct. 28, 2019. By Oct. 29, the fire had burned more than 600 acres and was 5% contained, according to the Los Angeles Fire Department. (CNS photo/Gene Blevins, Reuters)

For much of the last decade, autumn has brought wildfires of an unprecedented scale to both Northern and Southern California. Once again this year California Gov. Gavin Newsom has declared a state of emergency after fierce Santa Ana winds powered major fires throughout the state. The Kincade fire in Santa Rosa has burned over 75,000 acres in five days, and the Getty Fire in Los Angeles proper has so far forced the evacuation of over 7,000 homes.

Among those who had to evacuate in the middle of the night on Oct. 28 were the 450 students and staff of Mount St. Mary’s University. Mount St. Mary’s has two campuses, one located at the top of one of the foothills of the Santa Monica Mountains. As captured on videos  they posted online, students had to walk or drive down the hills to reach safety while fires burned nearby. Thankfully, all escaped without injury, and the campus has thus far been kept free of fire damage as well.

Meanwhile, nearby, 75 retired Sisters of St. Joseph of Carondelet and nine staff members were asked to stay in their three-story retirement community while the fires grew nearby. Los Angeles Fire Department Captain Miguel Escobedo arrived on the scene at 2 a.m. on Monday to find a number of nuns starting to make their way down the hill amid ash and smoke.

A fire department captain told local media that the sisters, some of whom were on oxygen, were scared but in good spirits. “We joked with them a little bit.... They are a great bunch of ladies.”

Eight of the sisters in the community were bedridden, and others were quite elderly. Given the rapidly changing nature of the situation, Mr. Escobedo feared by the time they had gathered the resources to move the sisters they would be trapped.

Instead, he asked the sisters to gather together in their community room while outside firefighters fought the fire and protected the building. Since then, the sisters have been allowed back into their individual rooms, but they are not yet able to leave.

The convent lost power and generators were put into place as backup, according to Mr. Escobedo. He told local media that the sisters, some of whom were on oxygen, were scared but in good spirits.

“We went in there and we calmed them down,” he said. “We joked with them a little bit and made sure their medical needs work. They are a great bunch of ladies.”

In a statement on Facebook on Monday evening, Oct. 28, the province leadership team wrote: “We cannot express enough our profound gratitude to the LA Fire and Police Departments. These first responders not only saved our property, but have been with the 80 sisters sheltering in place since before dawn this morning. Their kindness was exceeded only by their remarkable skills.”

By the next evening, the sisters shared an update: “LA fire [department] has assured us that conditions around Carondelet Center and Mount St Mary’s University have substantially improved…. The Sisters remain deeply appreciative for LA Fire and Police. They have been extraordinary in their care, support and protection. Please continue to pray with us tonight and tomorrow for winds to calm and for fires to be brought to an end. Most importantly may all the fire and police personnel be kept from harm.”

In the diocese of Santa Rosa, Bishop Robert F. Vasa wrote on Oct. 29: “We have come through many trials these past several days, and I know that we have more to endure. I hope and pray that your loved ones are safe and secure, and that your homes are intact as well. Like you, I am profoundly grateful and amazed that our first responders have been able to save as many structures and lives as they have so far.”

His post also suggested ways to respond to the crisis, from donations to the local Catholic Charities office to a request for specific supplies that would be of great use to those displaced by the fires this week, particularly cold-weather gear. The National Weather Service has predicted nighttime temperatures near freezing.

In Los Angeles, schools were closed in response to the fire conditions, and Archbishop José H. Gomez issued a statement on Oct. 25, asking for prayers for those at risk and the firefighters and other first responders. “We are facing a new outbreak of fires in the San Fernando and Santa Clarita regions,” he said.

“Please pray with me for the families at risk and also for the firefighters and other first responders. May God keep them all safe and bring these fires to an end! May Our Blessed Mother Mary be close to all of them.”

On Oct. 15, the archdiocese announced that it would expand the fund it began last year to help victims of California wildfires to include those who had suffered damages from fires earlier in the month in Los Angeles and Ventura counties.

Thank you to the brave firefighters. To the young ladies and the devoted sisters, Praying for your safety. Be brave and be safe!

Why is the climate change tag used for this article?

Higher temperatures and drought increase the probability of fire. Yes, you will probably say it's poor forest management and extra fuel on the forest floor. But these management techniques for better or worse have been around since the early 20th century. And moist forest floor detritus does not burn as well as dry does. That's the problem. The climate has changed and it is expensive. So, sorry folks. The time for charming homes made from flammable materials is over. At least, insurable ones. The age of the monolithic dome is here.