What California’s continuous apocalypse can teach us about life 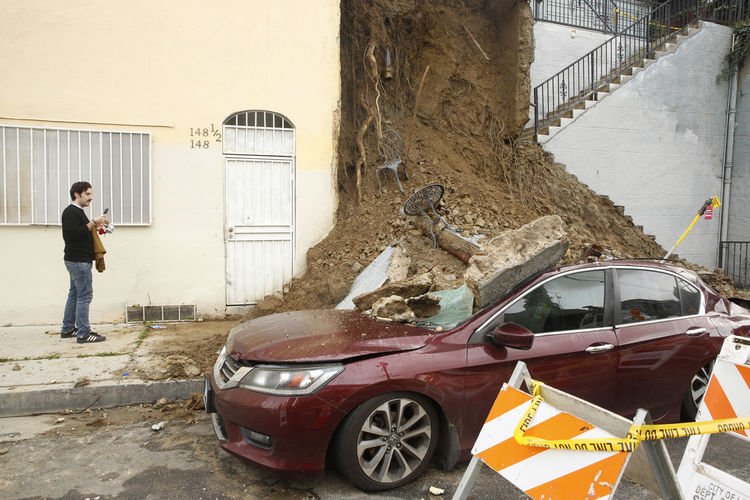 Michael Osborne, a film director, documents the damage from a mud slide next to his home in Los Angeles on Jan. 18, after three days of heavy rain. (AP Photo/Damian Dovarganes)

Last week it rained in Los Angeles for four days straight. I know that probably does not seem like a big deal if you live anywhere else, but it doesn’t happen here. Faced with even an afternoon of rain, our city rolls itself up like Washington, D.C., before a snowstorm. People stay off the roads and the weather comes up in every conversation. “The state needs the precipitation,” we tell each other, but mostly we just want it to end.

I know: You poor Angelenos, having some showers. We’d send you a card but we’re buried under three feet of snow until March.

But as we waited for the skies to clear last week I kept thinking about how often I hear people elsewhere describe conditions in California as “apocalyptic.” The fires, the earthquakes, the floods and mudslides—seriously, isn’t the whole state one strong shake away from sliding into the ocean, probably while on fire and there’s a car chase up the 405?

Isn’t the whole state one strong shake away from sliding into the ocean, probably while on fire and there’s a car chase up the 405?

To us, this conceit of California-as-disaster-movie is ridiculous. Our state has the fifth biggest economy in the world and is home to much of the nation’s produce and technical innovation. We’ve got our troubles, such as the growing number of people without homes. But there are no angels sounding trumpets and asking residents to separate into two lines here, other than perhaps outside the Oscars in February.

Still, the last 15 months have seen two of the four deadliest wildfires in the state’s history and two others that have been the state’s largest wildfires ever, as measured by acreage. We are long past due for a significant earthquake. In his 1998 book Ecology of Fear: Los Angeles and the Imagination of Disaster, Mike Davis argues that from the perspective of “ecological history” rather than recent history, our general sense of security in Southern California is without basis: “The urbanization of Los Angeles has, it seems, taken place during one of the most unusual episodes of climatic and seismic benignity.” For all our sometime glitz and glamour, it turns out this is not an eternal banquet we’re attending.

Of course, fragility and impermanence is the truth everywhere, not just in California. Every day a new study highlights this, and few of us seem to have the capacity to appreciate that fact. We continue building on flood plains, in fire zones or along fault lines, as though the worst will never happen—then once again even after it has.

Maybe California gets pinned as the Apocalypse State because it helps everyone else to avoid thinking about their own plight. To East Coasters, the End Times are indeed happening, but over there, past the Rockies.

Maybe California gets pinned as the Apocalypse State because it helps everyone else to avoid thinking about their own plight.

But for Catholics, thoughts of the apocalypse offer more than distraction. Biblically speaking, creation stories and apocalypses were both attempts to respond to the present-day struggles of the people reading them. Genesis 1 was likely written during a time when most Israelites had been cast out from their land and were wondering if all was lost; the text’s depiction of God creating a universe that was ordered and hospitable to life was meant to encourage them.

Revelations likewise was an attempt to reassure Christians that no matter what persecution and losses they were currently experiencing, their faith was not in vain. Christ would win out against the forces of evil and all would be saved.

If the country looks at California and sees an apocalypse, maybe that makes our state a means of revelation too—a story that helps other states consider both their own fragility and their underlying strength. Watching cable news or social media feeds, you would be hard pressed not to think our nation is impossibly, permanently fragmented; and yet much like the phone calls that came from the planes on 9/11, what you find in California (and elsewhere) at times of disaster is not vitriol but kindness and community. People without homes are taken in by strangers, web designers create websites to bring together fund-raising efforts, firefighters who have lost their own homes stop to help their neighbors. “The love in the air is thicker than smoke,” one woman told CBS in July after she lost her house.

Struggling to make sense of the California wildfires
Jim McDermott

You could see the same last week in the rain, as thousands came out to march with our city’s striking teachers. This was our teachers’ first strike in 30 years, and notably the objective was not only bigger salaries for themselves, but smaller class sizes, more aides and counselors, and a librarian and a nurse in every school. (How is it possible our teachers have to go on strike to get a nurse in every school?)

Maybe someday California will slide into the ocean—or, much more certain, the oceans will rise to claim a significant part of the coastline, here and everywhere else. (Enjoy the beach while you can.) Until then, we will certainly have our share of natural disasters. And amid those catastrophes, we will continue to find friendship and community. If you’re going to see California as an icon of apocalypse, try not to miss that.

Add to all the problems is that California has a high poverty rate. The highest when you factor in cost of living. http://bit.ly/2WgmQ98

I have always share your article to others and the information you have to shared it is the always be unique and different article from the other and i have to played the play online fireboy and watergirl it is the best game that i have seen you can play this game with this best news.