Are there opportunities for more dialogue after Canada’s divisive election? 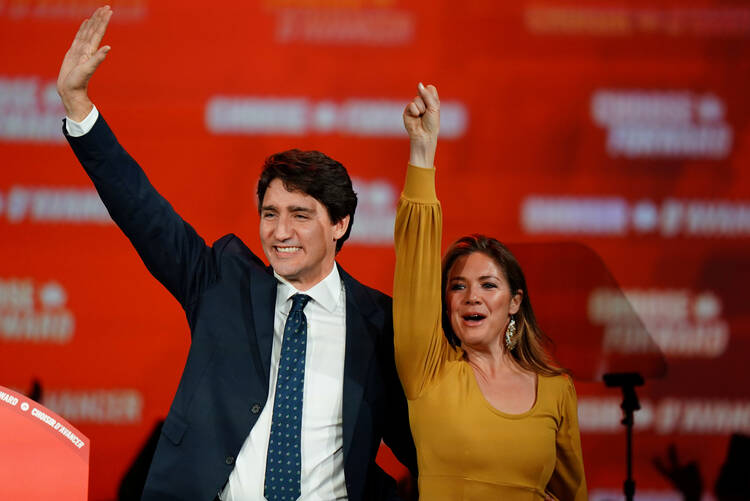 After an intense 40-day campaign season, Canadians went to the polls on Oct. 21, re-electing an embattled Prime Minister Justin Trudeau and the Liberal Party to a second term in governance. Although the Liberals had previously governed with a strong majority and came to power on a wave of optimism, they lost many of their seats this time around, down to 157 seats from the 184 they won in the 2015 election. The loss means the Liberals will have to form a minority government, either making a deal with another party to win legislative votes or playing the field on specific issues to drum up support.

A minority government will make it more difficult for the Liberal Party to press its political agenda, but some, like Anne-Marie Jackson, the director of the Jesuit Forum for Social Faith and Justice, see this as an opportunity for civic society actors. “Maybe this new situation loosens and opens things up for people to engage,” she said.

Recently, the Jesuit Forum has been working to foster dialogue around ecology, poverty and justice for and right relationships with indigenous people in Canada. “With the new government being a minority Liberal government, and with a balance of more progressive parties on the other side, maybe that gives a chance to be pushing the government more on some of these kinds of issues,” she says.

A similar sentiment was shared by the faith-based organization Citizens for Public Justice, which said in a statement that “minority governments bring uncertainty. But, they also provide an opportunity for citizens to have our voices heard. This minority government will need to cooperate in order to legislate. And this cooperation has the potential to make for better policy that brings us together.”

A minority government will make it more difficult for Trudeau’s Liberal Party to press its political agenda, but some see this as an opportunity that “opens things up for people to engage.”

Mr. Trudeau will have to negotiate with representatives whose constituencies are not sold on a unified national vision, let alone the vision of the Liberal Party. The Bloc Québécois, a party that supports sovereignty and independence in Quebec, made substantial gains in the election. Its leader, Yves-François Blanchet, campaigned on a moderated independence platform, continuing to support independence as the long-term goal of Quebec but acknowledging that it will not be accomplished any time soon.

Mr. Trudeau said he accepts the results of the election as evidence that Canadians want him to find ways to work with other parties and says he is willing to do so, but he ruled out forming a coalition government. Minority parties have pledged to support Mr. Trudeau’s Liberals on some issues and to fully oppose them on others.

The New Democratic Party, for example, says it will join Liberals on the affordable housing crisis in Canada and a proposed national pharmacare plan, planks that were found in both parties’ platforms. But the N.D.P. will join the Green Party in opposition to Mr. Trudeau on the Trans Mountain pipeline expansion.

Progress on the pipeline is a primary objective for Mr. Trudeau, especially in light of a flare-up of separatist sentiment in Alberta and Saskatchewan, where support for the pipeline is strong. Voters in these provinces in western Canada did not elect a single Liberal member of Parliament, and, following the election, talk about “Wexit,” or “Western exit,” ignited on social media.

When Parliament is back in session, it will look significantly different than it did just a few months ago. The Conservative Party, the primary competitor to the Liberals, rose to 121 seats from 99 in 2015, while the New Democratic Party dwindled to 24, down from 44. The Bloc Québécois finished with 32 seats, and the Green Party with 3, both making gains. The controversial far-right People’s Party won no seats. Its leader, Maxime Bernier, lost his own seat on election night.

Notably, Jody Wilson-Raybould, former attorney general in Mr. Trudeau’s cabinet, won her seat running as an independent candidate. Ms. Wilson-Raybould had resigned from her post in January, saying Mr. Trudeau and members of the prime minister’s office pressured her in a prosecution case against SNC-Lavalin, an engineering firm based in Quebec.

While Ms. Jackson supports national advocacy that can pressure the new government to focus on issues challenging Canada’s marginalized and vulnerable communities, she says her work at the Jesuit Forum also emphasizes the need to engage people locally. Hosting small groups that begin with a meal and casual conversation, Jesuit Forum members guide participants through issues like ecology and poverty, inviting Canadians to think through their assumptions and hear from others.

Ms. Jackson finds “a lot of hope” at these small gatherings. Real differences can surface in these spaces, but the process encourages patience. “It’s not exactly magic or anything,” she said, “but we do find that as we go around and people put their fears and hopes and opinions out there, and as they are listened to, something happens; there’s an energy that is fostered.”

At the end of the process, Ms. Jackson says many people ask how they can get more involved to address a specific issue.

Moving forward, Ms. Jackson hopes that dialogue within Parliament can push Liberal leaders on issues like protecting the environment or prioritizing the rights of indigenous peoples. The Jesuit Forum is putting together a new guide on dialogue around justice for and reconciliation with indigenous people in Canada, introducing conversations about colonialism and indigenous ways of seeing land and ecology, with help from an advisory board and editorial oversight that includes indigenous members.

Dialogue will be essential in the coming months if Liberals hope to deliver on their campaign commitments or, perhaps, be persuaded to abandon parts of it like the controversial Trans Mountain pipeline. Mr. Trudeau will have to pivot from a leadership style once based on his strong parliamentary majority to the more conciliatory approach that could hold off a “no confidence” challenge. Minority governments in Canada do not tend to last, with most ending within two years, meaning it may not be too long before Canada goes through another federal election.

Seems quite evident that there will be no moral rearmament in Canada for the next couple of years. Another stone falling out of the magnificent edifice which was Western Christian civilisation.

Canada had an election? Why weren't we informed?

Perennial dialogues about icefloes, but ask whether there will be any dialogue about the slaughter of unborn children (even within the ruling party)?