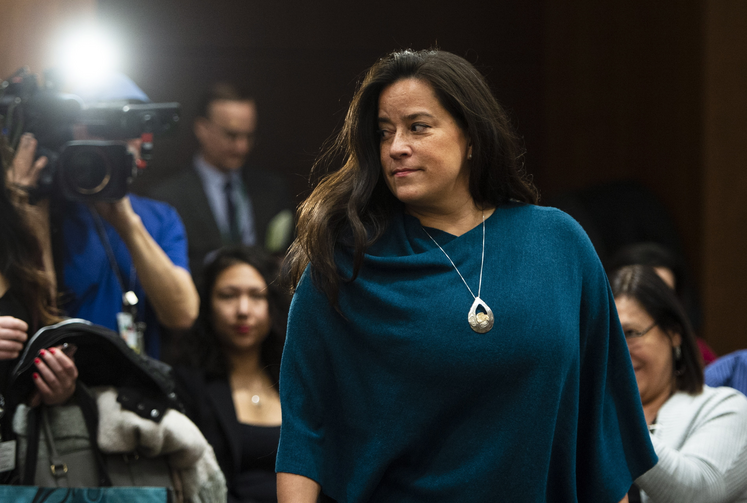 “[I]t has always been my view that the attorney general of Canada must be nonpartisan, more transparent in the principles that are the basis of decisions and, in this respect, always willing to speak truth to power,” said former attorney general Jody Wilson-Raybould in widely publicized testimony to Canada’s House of Commons on Feb. 27. In a move that is still shaking Canadian politics, Ms. Wilson-Raybould resigned from her post in the cabinet of Prime Minister Justin Trudeau on Feb. 12 over what she called pressure to go easy on bribery and fraud charges against the Quebec-based multinational engineering firm SNC-Lavalin.

Ms. Wilson-Raybould closed her testimony saying those convictions derive not only from her legal experience as a prosecutor but also “as an Indigenous [Canadian] person and as an Indigenous leader.” She has served twice as regional chief of British Columbia in the Assembly of First Nations, a national advocacy organization for Indigenous people in Canada—a position she left after winning a seat in Canada’s Parliament in 2015.

“I come from a long line of matriarchs and I’m a truth teller, in accordance with the laws and traditions of our Big House. This is who I am and this is who I always will be,” she said.

Her resignation followed a report from The Globe and Mail that federal officials, including Liberal Party leader and Prime Minister Justin Trudeau, had attempted to pressure Ms. Wilson-Raybould to negotiate “a deferred prosecution agreement” instead of a potential criminal case for corruption and fraud against SNC-Lavalin.

“I come from a long line of matriarchs and I’m a truth teller, in accordance with the laws and traditions of our Big House. This is who I am and this is who I always will be,” she said.

Though the scandal has rocked the nation’s political establishment, it has also become another in a series of disappointments for Indigenous people in Canada since Mr. Trudeau began his first term as Prime Minister in 2015. Ms. Wilson-Raybould, a member of the Kwakwaka’wakw Nation, was the sole Indigenous member of his cabinet.

“Jody Wilson-Raybould’s treatment by the current government joins a long list of betrayals since settlement began in Canada,” said Catholic Deacon Rennie Nahanee, an elder in the Squamish Nation, in an email to America.

The scandal revolves around the alleged political maneuvering of 11 individuals mentioned by Ms. Wilson-Raybould, including the prime minister, whom she says intervened in the justice process in the interest of SNC-Lavalin. The company is accused of paying $48 million in bribes to public officials in Libya as well as defrauding Libyan companies out of almost $130 million. If convicted in a trial, the company could be ineligible to bid on contracts with the federal government in Canada for a decade, something the company hoped to avoid by negotiating a hefty fine as a settlement instead.

According to The Globe and Mail report, published on Feb. 7, SNC-Lavalin lobbied federal officials to seek the negotiation, and those officials allegedly proceeded to pressure then-attorney general Ms. Wilson-Raybould accordingly. Mr. Trudeau said the report was false and that neither he nor anyone in his office tried to direct Ms. Wilson-Raybould to make a particular decision.

Federal prosecutors had rejected the prospect of remediation in October 2018. On Jan. 14, when Mr. Trudeau reshuffled his cabinet, Ms. Wilson-Raybould was reassigned from minister of justice and attorney general to Veterans Affairs. Ms. Wilson-Raybould’s resignation from the cabinet altogether came less than a month later, a move that Mr. Trudeau said took him by surprise and prompted him to reassure Indigenous Canadians that the resignation did not mean his government would stop pursuing reconciliation with them.

That attempt did not comfort Mr. Nahanee. “One of the foremost ways to bring about reconciliation in Canada after the closing of the Truth and Reconciliation Commission is to have Indigenous people working in positions of authority in all institutions, whereby real changes can be made for the benefit of Indigenous peoples,” said Mr. Nahanee. “Jody gave hope that real changes were taking place in the government.”

Ms. Wilson-Raybould described the last months before her resignation as filled with “veiled threats,” inappropriate “pressure to intervene.”

Indigenous people and organizations have expressed their solidarity with Ms. Wilson-Raybould since she offered her testimony, including a group of Indigenous senators, many appointed by Mr. Trudeau. Her reference to “a long line of matriarchs” was appreciated by female First Nations leaders and is becoming a symbol of pride.

Anger within the Indigenous communities of Canada in response to the treatment of the former attorney general has been palpable. “I just want to take this to the streets, to be quite honest,” Stewart Phillip, president of the Union of British Columbia Indian Chiefs, told the Aboriginal Peoples Television Network.

In her testimony, Ms. Wilson-Raybould described the last months before her resignation as filled with “veiled threats,” inappropriate “pressure to intervene,” offers to “line up all kinds of people to write op-eds saying that what [Ms. Wilson-Raybould] is doing is proper” and “a barrage of people hounding” her and her staff.

Her testimony “shows the integrity that [Ms. Wilson-Raybould] learned in the teachings of her people, and that she has applied them to her life, especially in her role as attorney general of Canada,” said Mr. Nahanee. Because she stuck to her principles, he said, “the price was her removal from the attorney general position, which I think should hold the highest principles of justice in the land.”

“I am firmly convinced that nothing happened here beyond the normal operations of government,” he said. He added that the former attorney general should have brought up any concerns with the prime minister directly, and that the January cabinet reshuffle was based not on events surrounding the SNC-Lavalin case but the retirement of Scott Brison, who was president of the Treasury Board.

“Indigenous people need to run for office, so that their voices may be heard and, possibly, changes can happen in our lifetime.”

Mr. Butts’s departure was followed by the resignation of Jane Philpott, another member of Mr. Trudeau’s cabinet, who considered the allegations against the prime minister’s office credible. “I have lost confidence in how the government has dealt with this matter and in how it has responded to the issues raised,” she said in a statement released on March 4. Ms. Philpott had served as minister of Indigenous Services since 2017 before she moved to president of the Treasury Board in the Jan. 14 cabinet shuffle. Her resignation, too, was seen as a significant loss by many Indigenous leaders who knew Ms. Philpott from her days as minister of Indigenous Services.

With a federal election slated for Oct. 21, the controversy does not bode well for the incumbent Liberal Party. Support for Liberals has been decreasing in public polls while the Conservative Party has been gaining.

According to Global News Ipsos, the scandal surrounding SNC-Lavalin has already cost the Liberal Party credibility: 55 percent of Canadians said the scandal will affect how they vote in Canada’s federal election this fall, and 67 percent said they believed the version of events told by Ms. Wilson-Raybould over Mr. Trudeau’s account. He denies any wrongdoing or being a source of political pressure on Ms. Wilson-Raybould. Almost two-thirds of those polled said Mr. Trudeau has lost the “moral authority” to govern.

Looking down the road to this year’s federal election, Mr. Nahanee believes the choice for voters will still be difficult. “It’s a tough call, to go with the devil you know or the one you don’t know.” Regardless, he says, “other Indigenous people need to run for office, so that their voices may be heard and, possibly, changes can happen in our lifetime.”

Mr. Nahanee added that the current scandal is part of a history of “continuous colonization of Canada,” which has cost Indigenous people land and rights. “In a sense it seems like business as usual for the Liberal government,” he says, noting a raid in January by the Royal Canadian Mounted Police on an encampment of the Wet’suwet’en people, who were protesting a natural gas pipeline planned to run through their territory.

Though Ms. Wilson-Raybould’s attempt to take the company to court has already had a decisive impact on her own life and career, the consequences for SNC-Lavalin are not set in stone. David Lametti, the current attorney general and Ms. Wilson-Raybould’s successor, said “no decision is ever final,” referring to his predecessor’s decision to pursue the case in court rather than negotiate a settlement. Polling taken before and after Ms. Wilson-Raybould’s highly publicized testimony to the House finds that just over half of Canadians think the matter should go to a criminal trial.

“The truth does set you free,” said Mr. Nahanee. “Now [Ms. Wilson-Raybould] can speak to her side of the issue, regarding what had taken place in her treatment as an Indigenous person in one of the highest positions in cabinet. Doing the right thing involves sacrifice, loss of status, maybe some shame or blame depending on who you speak to. Jody did the right thing, which honors not only her integrity, but the integrity of Indigenous people in Canada.”

There is no difference in degree of virtue or lack thereof which accompanies place of birth, ethnicity and gender.
If this woman declared simply that she judged the demands on her to be partial to a company which she believed had done wrong, it would have been enough.
Her "people" are as much under the yoke of the consequences of the Fall as all the rest of us.

She is a politician and a partisan for an ethnic sub-group unable or unwilling to face reality, the whole world is one way or another a global village with contemporary territorial issues based upon nation states not tribes.

This is the perfect storm for Justin Trudeau's Liberal government. It raises the thorny issue of the place and role of First Nations, as explained in this article, but it also raises the issue of Quebec against the Rest of Canada. Quebec is branded as the most corrupt province (I will avoid discussing this here) and SNC Lavallin is the flagship of Quebec engineering, a world-class firm which has managed some of the most ambitious projects not only in Quebec, but around the world. If the SNC-Lavallin managers don't get a negotiated agreement (something that is perfectly legal), go to court and lose their case, thousands of jobs are at stake for years to come, because the company will be prohibited to bid on public contracts for ten years. Just as well say that it will go down the drain. By the way, a couple of firms outside of Quebec would not be too unhappy to see this giant competitor fall. To top it all, it raises the question of Justin Trudeau's own attitude toward women. Although he has been very vocal on gender equality, one cannot avoid noticing that the two cabinet members he is having problems with are women, and a third one has announced she will not be running again in the upcoming election.

This article also appeared in print, under the headline “A 'truth teller' resigns from Trudeau's cabinet,” in the April 1, 2019, issue.