How the Amazon synod is connected to North American corporations 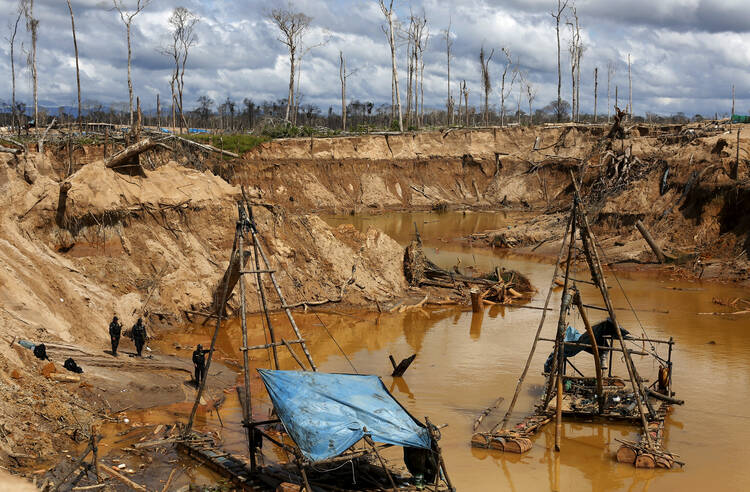 U.S. Catholics can be forgiven if they feel a little distant from many of the concerns surfacing at the Synod of Bishops of the Pan-Amazon this month. Ecological care for the Amazon region, the legal status of indigenous peoples and the shortage of priests in indigenous communities may not be issues that come up often in the U.S. church, which has struggled with enough of its own problems in recent years.

But the connection between the Amazon region and the church in the United States runs deeper than it might first appear.

“All of the industries that you find [active] in the Amazon benefit someone outside the Amazon.”

Many North American corporations, particularly U.S.- and Canada-based agriculture, mining and oil businesses, are intimately linked to the Amazon region, which contains a vast and diverse assortment of natural resources. These corporations often conduct business in a way that harms communities of indigenous peoples, the environment or both.

The mining industry, with which Canada has particularly strong ties, exhibits the kind of behavior that Ms. Kennedy describes. She explained that metals like tin and gold that are mined in the region end up—quite literally—in the pockets of North American consumers because companies use them in smartphone production. And, as an extensive report from 2018 makes clear, companies often conduct mining operations illegally.

“Historically, the region has been viewed as a kind of no-man’s-land where you can do what you want,” said Ms. Kennedy. “Almost like a Wild West. It’s difficult to police.”

The United States is one of those “other places” that derive economic benefit from the use of the Amazon’s resources. This relationship is financially and ethically complex since the corporations engaged in Amazonian commerce often contribute to deforestation and harm—directly or indirectly—indigenous peoples.

North American corporations often conduct business in a way that harms communities of indigenous peoples, the environment or both.

“If you look at the people affected most by environmental crime [such as illegal deforestation], it tends to be the most vulnerable populations,” said Ms. Kennedy.

Many nonprofits, religiously affiliated or not, have committed to pointing out injustices of this economic system. “We want to pinpoint actors who are part of this surging wave of illegal activity in the Amazon,” said Christian Poirier, a program director at the nonprofit Amazon Watch.

Mr. Poirier said his organization has had the most success identifying corporations employing illegal environmental practices in the soy and beef industries, two components of the larger agribusiness industry in the region. As an example, Cargill, the largest privately owned company in the world in terms of revenue, produces large amounts of soy using Amazonian lands. A recent report from Amazon Watch details how Cargill’s activity contributes to illegal deforestation, which the Brazilian government in particular does a poor job of policing.

In September, Cargill released a statement addressing concerns about its environmental practices in the Amazon.

“Cargill is committed to protecting the Amazon,” the statement read. “Illegal deforestation and deliberate setting of fires in the Amazon is unacceptable, and along with others in the food and agriculture industry, we will continue to partner with local communities, farmers, governments, NGOs and our customers to advocate for approaches to preserve this important ecosystem.” The statement also laid out the guidelines that Cargill plans to follow to ensure it does not contribute to illegal deforestation.

Pope Francis is taking an "unprecedented step...in terms of balance between economic growth and respect for human rights.”

The economic situation in the Amazon involves more than companies that physically operate there. Amazon Watch’s report details how massive loans, often from large U.S. banks like JPMorgan Chase and Bank of America, allow companies like Cargill to function. On the other end of the supply chain, corporations buy soy from Cargill to sell directly to consumers, meaning multiple parts of the North American economy are involved in draining valuable resources from the Amazon region. Enacting change for the benefit of the Amazon region is an inherently complicated process.

Given this complex financial web surrounding economic activity in the region, it may be difficult for North American Catholics to envision a helpful response to the situation. Mr. Poirier said that Pope Francis sets an important example.

“The pope is an incredibly important voice in terms of moderation and solutions for the Amazon and its people,” said Mr. Poirier. Amazon Watch is not a religiously affiliated organization, but Mr. Poirier said the group has been optimistic about what the synod represents: “It’s an important and, I would say, unprecedented step that the pope is taking in terms of balance between economic growth and respect for human rights.”

The Amazon synod is halfway over. Here’s what we know so far.
Luke Hansen

Mr. Poirier shared that his organization has previously arranged for indigenous leaders to meet face-to-face with executives of an oil company operating in the region with the hope that it would reconsider its decision to drill on indigenous lands. In many ways, the synod in Rome is the church’s version of such a meeting. It gives a face and a voice to the problems that often appear distant.

“This is positive,” said Ms. Kennedy. “Regardless of what practical solutions emerge, getting bishops from the pan-Amazonian region together to discuss strategies for advocacy with other bishops from other parts of the world, to target companies that are the biggest problems… It’s validating.”

How will U.S. bishops respond to the synod? There are plenty of connections to the Amazon region, but practical steps in the U.S. church, as Ms. Kennedy noted, are not guaranteed.

Planned Parenthood? Are they one of the sponsors of the Synod . Bishop Strickland of Tyler TX believes so.

I read this article, the one on Amazon Watch and the the one on Mongabay. In all of them, while they mention the Latin American countries, both socialist and capitalist, that sell their people's birthright for mining concessions and associated graft, none of these articles provide any name of an American mining company being engaged in such activity. I don't doubt the possibility (e.g. the manufacturing "maquiladoras" along our southern border and their checkered history of pollution), but from an investigative article I would have expected more specificity, not just vague assertions of wrong-doing.

I agree. I was looking for the names of our corps. We get the banks but not the illegal miners of the U.S.

Stuff is not wealth until a human being introduces it into a market.
A piece of fruit, unpicked and either eaten by animals or falling to the the ground and either growing another plant or rotting, is of no economic worth.

Gold in the ground is just another bit of rock.

Fruit, gold nuggets or fish gathered to sell are become possible wealth and can be bartered for currency.

Do we all owe a tax to South and Central Americans every time we eat a cup of French fries or a cup of hot chocolate?

It seems as if the bishops are urging us to worship money, put wealth and prosperity and potential primary resources above all else.

My dealings with the folks at Cargill were over 30 years ago. Let me tell y'all they could teach JPMorgan and BofA a lot about trading.
And while I am on this podium, Brazil got their start in soy as a result of an American politically motivated fit of pique.
It's great to have O'Hare scholars, it would be better to have writers who understand the sweep of economic history.

Agriculture is not my thing, but I thought the U.S. was growing so many soybeans they were coming out of our collective ears. And the Chinese have been slow to buy them. So why are American corporations allegedly growing soy in the Amazon? What am I missing?