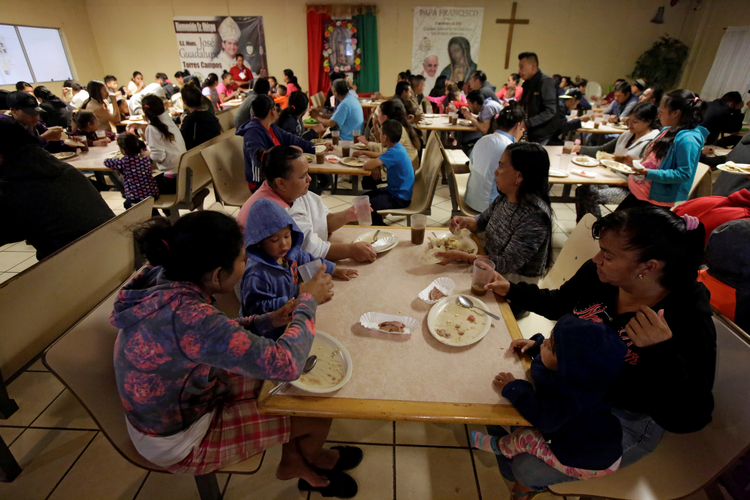 Staff at migrant shelters across Mexico told America last month that Mexican officials, military and police have been pressuring them for more information about the migrants they serve—a campaign that has continued for weeks despite the fact that under Mexican law migrant shelters are legally protected sites.

The increased attention by Mexican police and armed forces is encouraging undocumented migrants to avoid shelters, many of which are run by the Catholic Church here, and to follow more dangerous routes through Mexico, aid workers warn. Shelter staff add that the increased operations to detain and deport undocumented migrants will do little to stop migration to the United States.

“There are now fewer people staying at the shelters, but that doesn’t mean there are fewer migrants traveling through Mexico,” said Francisco Rocha Camacho, a worker at a diocesan-run shelter in Mexico’s southernmost state of Chiapas on the border with Guatemala. “They are now taking alternative routes to decrease their visibility, which makes them more vulnerable to criminal gangs.”

“The situation is becoming steadily more complicated,” shelter director Alberto Xicoténcatl told America last month.Mr. Xicoténcatl runs a program sponsored by the local diocese in Saltillo, the capital of the northern Mexican border state of Coahuila. “The number of operations by the authorities to check the status of migrants, of how many are arriving at the shelters and at the border, are steadily increasing.”

In a video that has gone viral, Mr. Xicoténcatl was filmed on July 23 confronting soldiers who were allegedly checking the status of migrants at his shelter. Mexican migration law prohibits authorities from checking the status of migrants within five kilometers (a little over three miles) from places where migrants receive shelter and humanitarian aid from civil society organizations.

While soldiers and police have repeatedly encroached shelters on the ground, staff say they also feel personally harassed by Mexican federal authorities trying to gather information through repeated telephone calls. “The Secretariat of the Interior appears to be very interested in who’s involved in helping the migrants,” said Mr. Rocha.

America has received similar reports of such harassment from migrant shelters at both Mexico’s northern border with the United States and its southern border with Guatemala; migrant workers there say the federal government has been calling them to ask how many migrants are staying on their premises, their nations of origin and, in some cases, the names of those involved in helping the migrants.

According to these sources, the pressure has increased steadily since the Mexican government began a crackdown on undocumented Central American migrants several months ago. That effort in its turn was spurred by threats from U.S. President Donald Trump to slap tariffs on Mexican exports unless the government of President Andrés Manuel López Obrador increased efforts to stem Central American migration. The threats appear to have worked; on July 22, Foreign Minister Marcelo Ebrard said Mexico had reduced the northward flow of undocumented migrants by more than one-third.

Shelter staff said that they believe that the Mexican government’s information-gathering operation is aimed at increasing the number of deportations from Mexico back to Central American states even more.

Diana Muñoz Alba, who works at the Casa Betania Santa Martha shelter in Salto de Agua, also in Chiapas, said that staff at her shelters have received calls from Mexico’s National Migration Institute (I.N.M.) “asking us for information about how many people were staying at the shelter, what their nationalities are.”

“On July 23, a group of officials who said they belonged to the local police and the I.N.M. came to the shelter and asked us to enter,” she said. “They wanted to intercept migrants staying there and deport them. We refused to let them in; it’s illegal.”

Besides I.N.M. officials, the National Guard, the Mexican army and local police have also at times been reported to aggressively search for migrants, sometimes with violence. On Aug. 2, a Honduran national was shot dead by local police in Saltillo. According to a statement released by authorities, the police acted in self-defense. Mr. Xicoténcatl told local media, however, that the migrants were chased by I.N.M. officials and federal police and that local police officers opened fire on them.

“There is an atmosphere of increased violence against migrants and permissiveness to that violence,” Mr. Xicoténcatl warned. “The deployment of the National Guard has made things worse. Migrants, shelters and aid workers are being intimidated.”

The crackdown on undocumented migrants has been severely criticized by human rights activists in Mexico, especially because it directly contradicts the rhetoric of Mr. López Obrador. During his campaign last year, the president said he would seek a less rigid approach to undocumented migration than that used by his predecessors.

Several attempts to reach the National Migration Institute and the Secretariat of the Interior for comment went unanswered.

We should also put a focus on the conditions in the countries where these people are fleeing. What is motivating and/or forcing them to the risk and hardship they face? By focusing on that it might highlight what can and should be done to help everyone there live better lives. When will we see such articles to put the spotlight on the conditions causing such a migration?

"US intervention in the affairs of these small and weak states has been deliberate, motivated by profit or ideology or both." From: https://www.theguardian.com/us-news/2018/dec/19/central-america-migrants-us-foreign-policy

"Harassment." Because Mexico has finally decided it should know who crosses ITS borders and who is in ITS country?

Apparently, any enforcement of immigration law anywhere in the world now constitutes "harassment" in the topsy-turvy world of Jesuit-speak and Liberal-speak (generally interchangeable terms). Why can't the police power of a state inspect the status of people on its territory? Answer that!

You seem to have missed the part that says "Mexican migration law prohibits authorities from checking the status of migrants within five kilometers (a little over three miles) from places where migrants receive shelter and humanitarian aid from civil society organizations."

Migrants are just cannon fodder in Mexican and US political games. Let them go through or demand documents, depending on what's convenient at the time.