Mexican shelters tell of harassment since U.S.-Mexico deal on migrants

Mexican shelters tell of harassment since U.S.-Mexico deal on migrants 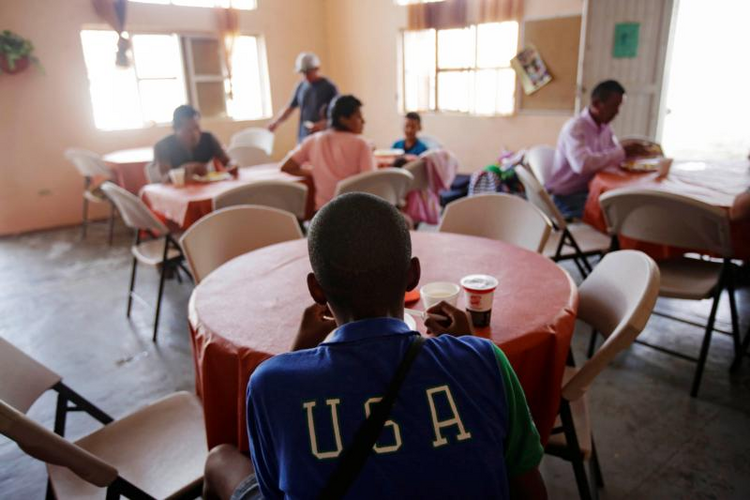 MEXICO CITY (CNS) -- Soldiers appeared recently at the diocesan migrant shelter in the northern Mexican city of Saltillo and demanded to see the identifications of its guests.

Shelter director Alberto Xicotencatl raced into the street to confront the soldiers July 23, according to video shared on social media. He shouted that Mexican law forbids demanding immigration documents from any person at a migrant shelter or within a three-mile radius of such places.

Xicotencatl attributed the army's visit to stepped-up migrant enforcement since striking a deal with the United States to increase immigration enforcement and avoid tariffs, a move the Mexican government says protected more than a million jobs at a time when the economy is showing signs of slowing.

But in exchange, Xicotencatl said, "(Mexico) is pursuing and detaining migrants so they don't get to the U.S. border."

He added, "There's no other explanation" for the army's visit -- and one by the federal police three days earlier, when they, too, asked to check migrants' documents.

Foreign Minister Marcelo Ebrard said July 22 that the migrant flow through Mexico had diminished by 36.2%. He attributed the reduced migrant flow to the application of Mexican immigration laws and sending a militarized police force known as the national guard to Mexico's northern and southern borders.

The U.S.-Mexico deal contained a clause allowing for a revision of Mexico's record on slowing migration after 45 days, with negotiations starting on Mexico becoming a safe third country, meaning asylum-seekers traveling through the country would be ineligible to make claims in the United States.

Trump has pushed for countries to the south of the United States to become migration bottlenecks. He threatened Guatemala July 23, tweeting that tariffs could be coming due to an inability to reach a safe third country agreement. Guatemala's bishops have criticized the idea of Guatemala becoming a safe third country and warned the impoverished nation is in no position to receive so many migrants.

Increased enforcement has caused disquiet for the Mexican bishops' conference and its migrant ministry, which said in a July 23 statement, "Mexico without an effective migratory policy has been subjected to the criteria and impositions of the U.S. government."

The statement continued, "Dignity and the sovereignty of our nation, along with the dignity and human rights of migrants are above any negotiations. ... Sadly, we see that this dignity as persons and children of God is being violated, as it has been 'exchanged for a plate of lentils.'"

The increased enforcement has put Catholic-run shelters in the crosshairs of an administration anxious to show the United States it's keeping up its end of the bargain.

In a six-week period this summer, a parish-run shelter in Agua Prieta, opposite Douglas, Arizona, and the Scalabrinian shelter in Tijuana have received visits from the national guard, which demanded to check migrants' documents. La 72, a Franciscan-run shelter in southern Tabasco state, was threatened with a money-laundering investigation.

"The church and civil society have always defended the 'no criminalization of migrants and human rights defenders,' who fight in favor of dignity, against the current and with important risks to their own security," the bishops' statement said.

"Walls are not only built with stones and bricks, but with negative attitudes, too, such as the deployment of thousands of National Guard members on our borders as a failed solution to stop migration," the statement continued. "A wall doesn't get to the root causes of the migration phenomenon."

I was arrested protesting Trump’s border policies. The Gospel calls us to do more.
William Critchley-Menor, S.J.

At the shelter in Saltillo, some 185 miles from the U.S. border at Laredo, Texas, Xicotencatl said increased enforcement and measures such as bus companies demanding immigration documents from passengers has sent the guest count plunging from 400 people per day in early June to just 80 people per day now.

Mexican President Manuel Lopez Obrador once promised to not do the "dirty work" of foreign governments on the migration issue, and even started issuing humanitarian visas to migrants, but stopped the plan due to overwhelming demand for the documents. His discourse also remains solidly pro-migrant and he even cites Scripture -- "loving the other," he says often -- when speaking on the issue.

But advocates like Xicotencatl express disappointment with the president, saying, "It's a schizophrenic government with a discourse completely distant from the reality we're experiencing."