The Editors: To protect the Amazon, we must first listen to its people 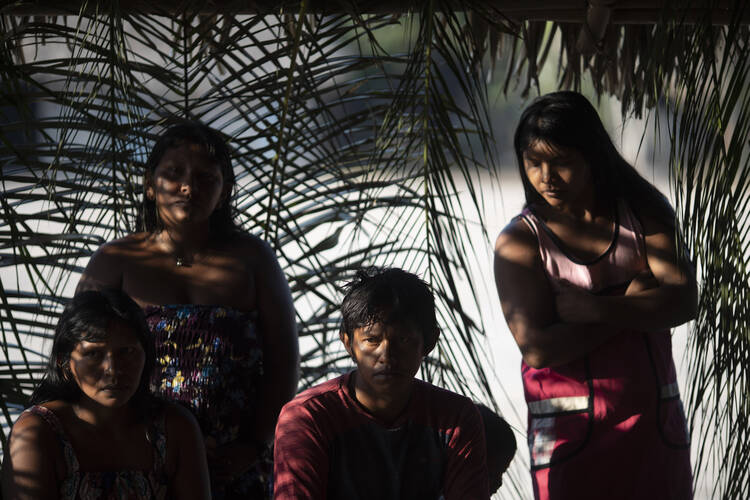 In this Aug. 27, 2019, photo, members of the Kayapo indigenous group attend a meeting to discuss community issues in their village Bau, located on Kayapo indigenous territory in Altamira in Brazil’s Amazon. (AP Photo/Leo Correa)

In late August, fires burning in the Amazon caught the attention of the media, politicians, celebrities and ordinary citizens. Dire warnings about the imminent collapse of the “lungs of the earth” and dramatic photographs of flames bursting from the forest canopy spread across the internet—and with them a fair amount of misleading information. Some of the most widely shared pictures were from years ago or places far from Brazil. And while the number of fires is at a 10-year high, the incidence of fire was higher in the early 2000s. Still, the news inspired calls for action from Western leaders at the Group of 7 meeting in France and a defensive response from the Brazilian government, which sees current mobilization to save the rainforest as a threat to its national sovereignty.

It did not have to play out like this. While these fires are not without precedent and the earth is not going to run out of oxygen any time soon, deforestation in the Amazon is a significant problem that could both contribute to and be exacerbated by climate change. But facing this challenge will require engaging with the people of the region, understanding their situation and listening to their concerns.

This October gives the church an opportunity to hear the cries of the earth and the people of the Amazon.

That is precisely what the Vatican will do this October at the Synod on the Amazon, taking place in Rome from Oct. 6 to Oct. 27. In calling for the synod, Pope Francis seeks to open “paths of dialogue that will help us get out of the path towards self-destruction of the current socio-environmental crisis.” Topics deeply intertwined with the burning of the Amazon—deforestation, climate change, the rights of indigenous people and the exploitation of the rainforest for commercial gain—are all on the agenda.

In Catholic circles, however, much of the conversation before the gathering has focused not on the region’s ecological crisis but rather on a single sentence from the synod’s working document: “Affirming that celibacy is a gift for the Church, it is requested that, for the most remote areas of the region, the possibility of priestly ordination for elderly people is studied.” Critics of the synod see in this discussion a Trojan horse to bring married priests to the entire church.

In reality, the topic is being taken up in response to the need of thousands of Catholics in remote parts of Amazon, who often go weeks or months without seeing a priest or celebrating the Eucharist. It should be understood in the context of the Amazon’s unique pastoral situation, not through the ideological lens that frames the celibacy debate in the United States and Western Europe. And while it is an important question, it should not be allowed to hijack the entire meeting. (Criticism of a single footnote on Communion for divorced and remarried Catholics in Pope Francis’ encyclical “The Joy of Love” overshadowed a profound reflection on the complexities and beauty of family life.)

This October gives the church an opportunity to hear the cries of the earth and the people of the Amazon. Concerned citizens of the world would do well to emulate the synod’s “see, judge, act” approach, “a dynamic process of listening and discerning,” as they work to protect this richly diverse, life-giving and fragile gift of creation.

Maybe the editors should be worried about Venezuela.. The country with the world’s largest oil reserves is cutting down trees to use as fuel. By the way, listening to the people is called populism. Is that what the Pope is recommending?

The Roman Catholic chain-of-command would do well to take the selfsame advice: To protect the children, we must first listen to its victims, (and not eschew them).
/geo ex machina

A more factual account of the fires is NASA's report found here
https://www.science20.com/robert_walker/nasa_say_the_amazon_is_burning_at_below_average_rates_yetany_news_stories_say_record_rates-240959
"US space agency NASA, meanwhile, has said that overall fire activity across the Amazon basin this year has been close to the average compared to the past 15 years."

"The Amazon rain forrest burns every year and people ignore it. Until Brazil gets a right wing president, and everyone loses their minds"