Latin American bishops sound the alarm: “If the Amazon suffers, the world suffers” 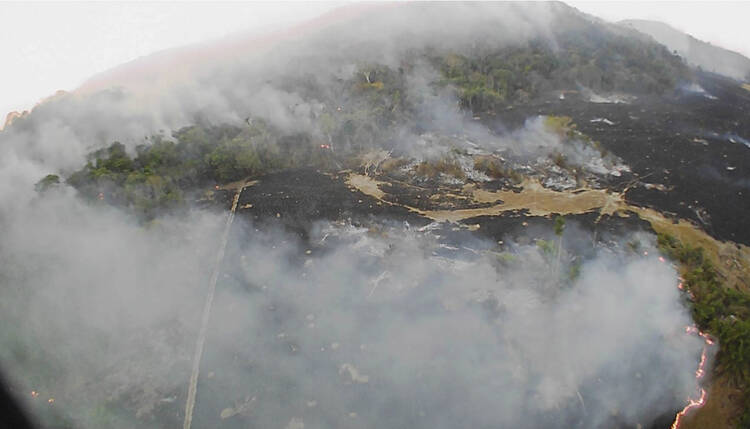 A record number of wildfires and the increasing rate of deforestation of the Amazon in 2019 have called international attention to Brazil’s failure to protect the world’s biggest rainforest. As the far-right President Jair Bolsonaro refuses to acknowledge the severity of the problem and accuses scientists of sensationalism, even suggesting a conspiracy against him, the Brazilian Catholic Church is denouncing the destruction and struggling to help communities affected by it.

Leaders of the Latin American bishops’ council urged international action to save the Amazon rainforest as massive fires continued to burn.

“We urge the governments of the Amazonian countries, especially Brazil and Bolivia, the United Nations and the international community to take serious measures to save the lungs of the world,” said the Aug. 22 statement by the top officers of the council, known by its Spanish acronym, CELAM.

“What happens to the Amazon is not just a local issue, but is of global reach,” the bishops said. “If the Amazon suffers, the world suffers.”

Latin American bishops: “If the Amazon suffers, the world suffers.”

The Amazon produces 20 percent of the world's oxygen, according to scientific measurements.

“There’s a noticeable increase in the criminal wildfires this year, provoked by big landowners and invaders who seek to expand their farmlands by grabbing indigenous lands and ecological reservations,” said the Rev. Roque Paloschi, who is the archbishop of Porto Velho, in Rondônia—one of the Brazilian states in the Amazonian region most impacted by the wildfires. Father Paloschi is also the president of the Indigenous Missionary Council, a commission of the National Conference of the Bishops of Brazil that advocates the rights of indigenous peoples. He told America, “[The landowners] are being benefited by the policies of the current administration, which pretends nothing is happening.”

In 2018, Mr. Bolsonaro successfully campaigned on a promise to end what he called an “an industry of fines” and to loosen restrictions on economic activities in environmentally sensitive areas. Since he assumed office at the beginning of this year, the rate of deforestation in the Amazon has gradually increased, according to the National Institute of Space Research (INPE), a government agency that monitors the Amazon with satellites.

In July, Mr. Bolsonaro accused the physicist Ricardo Galvão, then INPE’s president, of “acting on behalf of a non-governmental organization” and cast doubts on the deforestation data presented by the institute, which showed a rise of 278 percent in the amount of land deforested in July (compared with the same month of 2018). Mr. Galvão was fired in August.

Mr. Bolsonaro successfully campaigned on a promise to end what he called an “an industry of fines” and to loosen restrictions on economic activities in environmentally sensitive areas.

Vague charges of a conspiracy of NGOs against his administration are a common excuse used by President Bolsonaro when he is confronted with negative data. “Maybe—I am not affirming it—these [NGO people] are carrying out some criminal actions to draw attention against me, against the government of Brazil,” he told reporters on Aug. 21.

INPE also demonstrated a record number of wildfires in the Amazon in 2019. The rainforest accounted for more than half of the 72,843 wildfires detected in Brazil through Aug. 19; that total represented an increase of 83 percent over the same period of 2018. It is also the highest number of wildfires ever registered by the agency. According to environmentalists, most of the fires are caused by farmers who want to expand their areas of pasture.

The wildfires in the Amazon—and in other biomes of Brazil, Bolivia and Paraguay—helped to create an unprecedented phenomenon in a vast area of Brazil on Aug. 19, when day became night at 3 p.m. in major cities of the southeast region of the country, such as São Paulo, the most important economic center of Brazil. The smoke generated by the burning forests combined with atmospheric humidity and produced a dark rain full of toxic substances originating in biomass fires.

Day became night at 3 p.m. in São Paulo, as smoke from the burning forests produced a dark rain.

“Unfortunately, the wildfires only caught the eye of the national and international communities when their consequences reached the heart of the economic system. But the devastation had long impacted vegetal and animal species and the poor communities of the Amazon,” said the Rev. Flavio Giovenale, the bishop of the Diocese of Cruzeiro do Sul, in the Amazonian State of Acre.

The Catholic Church, Father Giovenale said, has been dealing with environmental issues in Brazil for at least three decades. In the 1980s, a Fraternity Campaign—a Lenten drive of the Brazilian Church—focused on ecological issues throughout the country. “A few years after, the theme was the Amazon itself. We’ve been reflecting on it and mobilizing people since then.”

Through its social pastorals and commissions of the Brazilian bishops’ conference—focusing on the struggles of peasants, indigenous peoples and workers—the church has denounced the destruction of the rainforest and proposed policies to protect it.

On Aug. 21, for example, after a few days protesting at the Chamber of Deputies (the lower house of the Brazilian Congress), indigenous organizations—including the bishops’ Indigenous Missionary Council—managed to temporarily block the approval of a bill that would allow non-indigenous farmers and the government’s indigenous agency to use indigenous reservation lands for commercial farming. The measure was considered an attack on the self-determination of the indigenous peoples.

“One of the challenges of the church is to assist and give hope to the major victims of this exploitative model of life,” said Father Paloschi.

Brazil has one of the most violent prison systems in the world. Can the Catholic Church help?
Eduardo Campos Lima

According to Father Paloschi, the church learned through working with Amazonian communities that a different economic model, based on the conservation of nature, should be possible for the region. “Many of us tried to be in the shoes of the victims of the disastrous occupation of the Amazon and we learned a lot from it. This is the basis for a prophetic mission of the church in the rainforest.”

As the Synod on the Amazon approaches (it will be held in the Vatican in October), the church seems to be more forcefully denouncing the deforestation of the region. On Aug. 22, CELAM released the statement titled “We Raise Our Voice for the Amazon.” The bishops’ statement calls out the governments of the region, particularly those of Brazil and Bolivia, to “take serious measures in order to save the lungs of the world.”

“The synod is urgent and very necessary. Many people have been criticizing it, saying it’s about politics and that the church should not meddle in such affairs. Unfortunately, some people are living among smoke and still deny there’s something wrong happening in the Amazon,” said Father Giovenale.

You have to understand Bolsonaro is Trump for the left. It only took to the second sentence and the use of the term "far right wing" and Bolsonaro to appear. Maybe the government is to blame and we will have to see how this progresses.

He literally is far-right populist, he even calls himself far-right, I don't see what's wrong with writing facts in the article?
Anyway, at this point world should just disregard this clown, jump over his lying rhetoric of "hurr durr we have no money to help amazon" mixed with "muh independence, we dont want money!!11", and pay specialists who actually work there to extinguish the fire.
It's really quite funny to watch Brazil or US from Europe, because we are past that moment where politicians could say whatever the hell they wanted to say, making sure to shout "...and GOD" at the end. Bolsonaro claims to be christian (not catholic obviously, he took protestant baptism which means automatic excommunication), and yet speak about poor people as if they are cockroaches, unable to think for themselves. He even tried to lower the age of sterilization to 21. I don't understand the fascination of far-right people (especially catholics, its like they never read catechism :V) with lies and this level of disregard for human lives.

Maybe you can explain what far right means? It seems the author thinks it is a major pejorative. I have never seen a good definition of it. And what has caused the past fires or the even bigger fires elsewhere in world? One fact in some of the stories is this is most fires since 2010. So did Lula cause past fires?

“China demand for Brazilian soy is the main reason why soy acreage has been expanding for the past 15 years.

If you want to save the Amazon, it depends on China.“

The people who monitor the Amazon for fires and the encroachment of development have issued a statement saying that the fires this year are about average for this time of the year and that most of the fires are on pastoral land. Just as happens in Indonesia, fields are burned off after harvest and before ploughing ready for the next crops.

The Climate Crisis industry is simply using this as another plank in their propaganda platform. Fake news.
The Brazilian president knows his own country and is quite right to refuse to be used as another dupe of the ultra far left Green fanatics.
He is also an elected leader in a country where there is universal suffrage and compulsory voting and has a sensible centre platform for his country long plagued by ratbag revolutionaries and corrupt officials.