Trump’s anti-immigration rhetoric is meant to instill fear, not for enforcement, advocates say 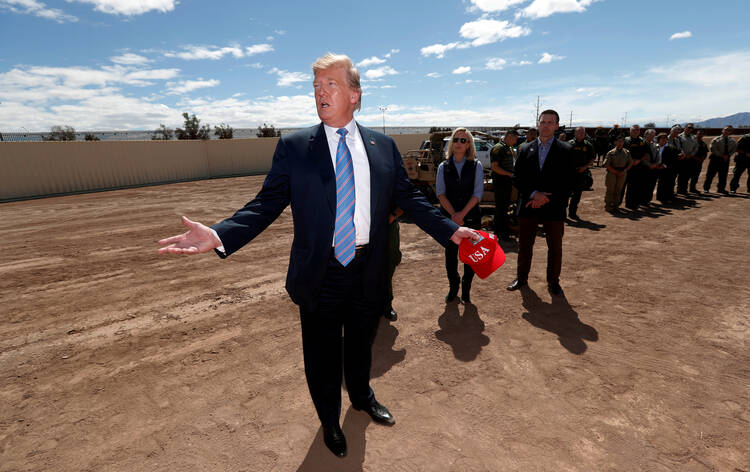 Throughout his administration, President Donald Trump has vowed to curb both legal and illegal immigration to the United States. From extending the wall on the U.S.-Mexico border to efforts to end the Deferred Action for Childhood Arrivals program to making it more difficult for green card holders to retain their status, the Trump administration has arguably made reducing the number of immigrants in the United States the core of its agenda.

Over the last couple of weeks, the Trump administration has announced further measures to address the number of migrants in the United States, including raids by Immigration and Customs Enforcement as well as new regulations on asylum seekers.

The administration announced raids in 10 different cities targeting 2,000 undocumented immigrants during the weekend of July 13 and 14. While there are no reports of any such large-scale raid—just the opposite—the announcement itself caused widespread fear and anxiety.

“We didn’t see any raids in Dallas,” said Josephine Lopez Paul, lead organizer with Dallas Area Interfaith, an affiliate of the Industrial Areas Foundation. “But immigrants have been living in fear for years now.”

The fear keeps the community from participating in certain things, like the federal census or health care for their children.

The fear keeps the community from participating in certain things, like the federal census or health care for their children, she said. That includes families with children who are U.S. citizens, Ms. Lopez Paul said, noting that a number of families have disenrolled their kids from the Children’s Health Insurance Program. She believes the raid threats, whether they are carried out or not, are intended “to instill fear in communities” and isolate individuals.

Earlier this month, the Trump administration also announced that the U.S. departments of Justice and Homeland Security would adopt an interim “third country rule” requiring immigrants seeking asylum at the U.S.-Mexico border to first apply for refugee status in another country. The measure drew criticism from many Catholic leaders, including Cardinal Daniel N. DiNardo of Galveston-Houston, the president of the U.S. Conference of Catholic Bishops.

Yet days after the new rule was said to have been implemented, the acting head of U.S. Customs and Border Protection told NPR it was being piloted “in just one location,” enforced at two Border Patrol stations in the Rio Grande Valley in Texas. On July 24, a federal judge in California blocked the Trump administration from enforcing the new rule, the Associated Press reports.

That outcome was expected by Teresa Cavendish, director of operations for Catholic Community Services of Southern Arizona. In general, she believes the Trump administration is unsure if any one measure will hold up in court, so instead it uses a “multi-pronged approach,” hoping that something will have an impact.

“Welcoming the stranger is one of the tenets of our beliefs, as the people of God.”

Catholic Community Services runs the Casa Alitas shelter for asylum seekers in Tucson, Ariz. While it is currently being run out of a former Benedictine monastery, the shelter will be moving to a Pima County facility that can accommodate more than 300 asylum seekers.

The families who arrive at Casa Alitas have passed the initial asylum screening at the U.S.-Mexico border and have received permission to remain in the United States until their asylum court hearing. Most stay only a day or two before making their way to another U.S. city.

Over the last three weeks, Ms. Cavendish said, the number of asylum seekers they receive on any given day—previously as many as 300—has dropped by more than half.

“We’re never quite sure what the outside push and pull is,” she said of the various factors that contribute to the number of asylum seekers that appear at the shelter. For example, immigration officials regulate the number of individuals who may apply for asylum on any given day through a process called metering. Immigration officials may also process individuals through detention centers at different rates.

“Welcoming the stranger is one of the tenets of our beliefs, as the people of God,” Ms. Cavendish said. “We seek to alleviate human suffering when we see it. We are seeing this suffering right in front of us in such significant numbers, we simply can’t ignore it.”

During Holy Week, there were 1,000 asylum seekers in shelters in the Tucson area, she said. On the Mexico side of the border, Ms. Cavendish said, there are constantly a high number of families waiting to ask for asylum.

“It’s difficult to make predictions,” she said. “It may be down now, but it can cycle back very quickly. You need to be prepared for folks. If you calculate wrong, that means someone will be sleeping on the street.”

Casa Alitas makes its preparations independent from any Trump administration crackdown efforts. The same is true for Catholic Charities in Texas.

Benjamin de la Garza, the executive director of Catholic Charities in Laredo, Tex., noted a drop of more than half in the number of asylum seekers arriving at their shelter last week. Normally, they received more than 200 a day.

“When they take measures and announce them, they instill fear among the immigrant community and score points with their base.”

“Right now, it’s too early to make a prediction,” he said of how the new asylum regulation could affect numbers at the shelter. He said shelters on the Mexico side of the border, in Nuevo Laredo, are full, with as many as 3,000 waiting to apply for asylum.

On numerous occasions, the Trump administration has accused asylum seekers of exploiting “loopholes” within the immigration law. Yet last year, judges denied asylum in 65 percent of such cases, marking the sixth year in a row that denial rates have increased. Last year, the Justice Department, in announcing its “zero tolerance policy,” vowed to prosecute anyone who crossed the U.S.-Mexico border illegally, including asylum seekers. The policy, which was ultimately blocked by the courts, led to the separation of children from their families.

“When they take measures and announce them, they instill fear among the immigrant community and score points with their base,” said Donald Kerwin, executive director of the Center for Migration Studies in New York. “They know they can’t deport everybody, so they set broad enforcement goals and hope [other undocumented immigrants] will leave. They’re trying to do deportation through fear, to get people to self-deport.”

Dante, Trump and the moral cowardice of the G.O.P.
Charles Sykes

The administration is considering cutting the number of refugees admitted to the United States to zero, Mr. Kerwin said, noting a report from Politico. Last year, Mr. Trump also endorsed a bill that would cut legal immigration by 50 percent, according to the Migration Policy Institute.

Last month, the Center for Migration Studies released the Federal Enforcement Effect Research Survey, an analysis of the impact of Trump administration policies on faith-based groups that work with immigrants. Mr. Kerwin said Trump administration policies—like the “remain in Mexico” policy, which requires asylum seekers to wait for legal proceedings in Mexico until courts can hear their case in the United States—create “the appearance of chaos, which serves [Mr. Trump’s] purpose” of reducing the number of immigrants.

In Dallas, Ms. Lopez Paul said the church works to dispel fear through “know your rights” workshops, a parish identification card program and health fairs. Dallas Area Interfaith hosts events at churches and synagogues to build community amid a climate that breeds isolation. She sees the broad push to cut down the number of immigrants as a reaction to the growing number of Latinos in the United States.

“We’re not going to see meaningful change until we hold our elected officials to account,” she said. “National politics is not going to move forward without a centrist agenda of pro-immigrant reform.”

This must be the 50th article by this author where he avoids any of the real moral issues with the immigration or migrant crisis. They’re all designed to make Trump look bad. So what is the real agenda?

What happened to the border apprehensions statistic published the other day. It was taken down after a couple hours.

(1) "Ms. Lopez Paul said the church works to dispel fear through 'know your rights' workshops".
These workshops may be effective if the audience is fearful legal residents. For illegal residents, probably not much.
(2) "She sees the broad push to cut down the number of immigrants as a reaction to the growing number of Latinos in the United States."
I see it likewise. Alas, Latinos have a bad image because they are a greatly disproportionate number of the people who are illegally in the United States. If some other identifiable group gained such a number, heat would be off Latinos.

Opting Out
3 years ago

Richard Bell.....Alas, Latinos have a bad image because....
Fear is a powerful motivator. Americans are gripped with fear today and Latinos are easy scapegoats even if we account for the menial jobs few Americans care to do themselves

Arrest Miller, because what he has ordered is a violation of the ACLU case. Pence needs to invoke #25thAmendmentNow because Trump is crazy, so @VP his sin eater.

Free enterprise, developing science and technology has produced an economy so productive that ancestors of only a few generations ago could not have imagined, in their wildest dreams, the standard or living the average person enjoys today. Not even the wealthiest of two centuries ago, had air conditioning, rapid mobility, instant communication, and today's relative medical security. Furthermore, the more that is discovered and invented the more that can be discovered and invented. This means the entrepreneurial economy can grow at an increasing faster rate --- if you maintain proper free enterprise environment for this to occur.

There is a specific cultural environment that allows the freedom of a horizontal connection that allows free flow of economic formation Making it possible to build a very successful high technology economy that we have in America.

When political structures are hierarchical, with top-down control, as most socialist economies are, it's severely inhibits that horizontal connection and and property rights. Thus we have economic refugees crashing the border to get into a free trade, free market economy where opportunities are abundant.

It would make more sense to take America to them. They would much rather stay in their own communities with their families and culture. Traditional America is about the rule of law, property rights, and the Protestant ethics of hard work, conscientiousness, Thrift, commitment to God, Family, Church, community and Etc

Most important is the way original Americans took care of government, not government taking care of them.This prevents that vertical Hierarchy that destroys the possibility of dynamic economic growth.

You break the law, you SHOULD be afraid. Illegal aliens are breaking the law. Why do we have this juvenile concern about their "fear?"