How a Brussels church became a home for Latin American refugees 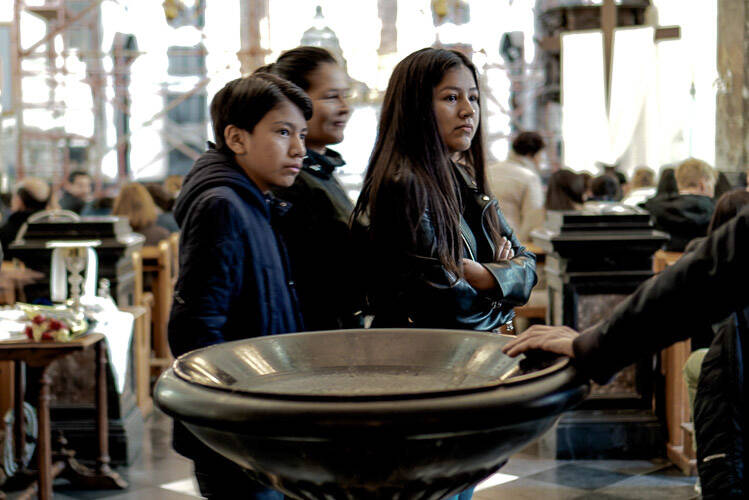 On Sunday mornings, a church serving the Latin American community in Brussels, Belgium, is always full. Parishioners are greeted with hugs and kisses, along with “holas” and “bonjours,” at the entrance while, inside, dozens of people stand at the back of the nave for lack of seats.

For these parishioners, Notre Dame aux Riches Claires represents more than a chance to attend Mass in Spanish. Portraits of St. Óscar Romero adorn rooms next to the sanctuary, and parishioners buy and sell empanadas, tortillas, tamalesand other Latin American food staples after Mass.

In a country where the Hispanic community is dispersed and Latin American restaurants and organizations are few, Notre Dame aux Riches Claires is the go-to gathering place for migrants and refugees who want to be reminded of home. New immigrants stop by Notre Dame aux Riches Claires to find God and community, and as more asylum seekers arrive in Belgium from El Salvador, Venezuela and Colombia, more people crowd into its pews.

“Some call, others go directly to the parish looking for information, help and support,” the Rev. Óscar Escobar, a native of Colombia, explained. “This is what Latin American migration looks like [in Europe],” he said, even as other groups like Syrian migrants have dominated media attention in Europe.

Latin American asylum seekers are increasingly coming to Europe when they flee violence, poverty and humanitarian and political crises in their home countries. Nearly 20,000 Venezuelans applied for asylum in Spain in 2018, according to European Union statistics.

In a country where the Hispanic community is dispersed and Latin American restaurants and organizations are few, Notre Dame aux Riches Claires is the go-to gathering place for migrants and refugees who want to be reminded of home.

The pattern is similar for Central Americans. Almost 2,300 Salvadorans and 2,400 Hondurans also applied for asylum in Spain last year. An undetermined number of migrants do not apply for asylum but join the labor force as undocumented workers, sending remittances back home.

Though the Latin American community remains small compared with Spain, Central Americans are also coming to Belgium in growing numbers. More than 400 Venezuelans and 150 Colombians applied for asylum in 2018, or more than 20 times their numbers a few years ago.

Even though they come from a small nation of only 6.4 million people, Salvadorans now represent the 10th largest community of asylum seekers in Belgium. That number, however, is still far lower than asylum seekers from Syria, Palestine, Afghanistan or Iraq. Just over 280 Salvadorans asked for international protection in Belgium in 2018.

While the asylum seekers from Central America have been the source of consternation to many in the United States, in Belgium their far fewer numbers have not created much of a stir. The migrants for their part have decided that flying to Europe is a safer path to a new life than crossing Mexico and reaching the United States on foot.

In Belgium, asylum seekers have the option of staying at a sponsor’s home or remaining in refugee centers, usually repurposed military camps or hospitals. While they wait for their applications to be processed, which generally takes six to 12 months, they may live with asylum seekers of other nationalities and cultures, often people from the Middle East and Africa.

Fred, a refugee from Venezuela who preferred not to share his full name, found at the Riches Claires church a community outside of the refugee center where he had been living. He, his wife and his two children left a political and humanitarian crisis behind in Venezuela. The shock of their abrupt flight was compounded by their arrival in a country with multiple cultures, languages and religions. They were surprised to discover the cultural diversity in Belgium.

“Everything was new for us when we got here,” Fred told America. “It’s a multicultural country; there are new languages; there are new ways of thinking, and we didn’t even understand the climate,” he said with a laugh. In refugee centers, people may speak French, Dutch, English, Arabic and Afghan; Spanish is rarely heard. 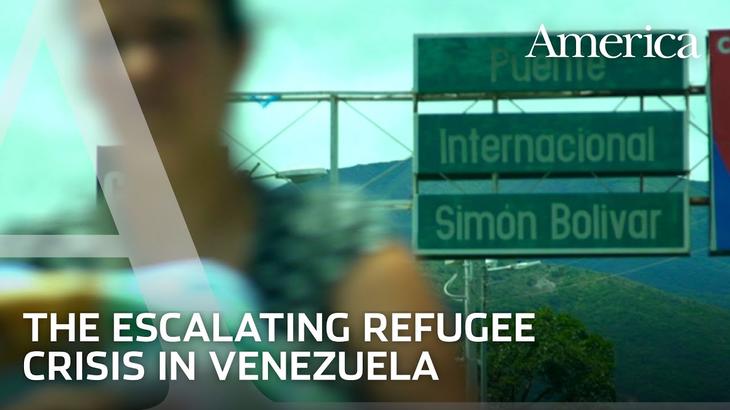 Notre Dame aux Riches Claires has been a little corner of Latin America in Belgium where asylum seekers see familiar faces, hear Spanish and take a break from the Middle Eastern flavors served up in the cafeteria at the refugee center. The church celebrates national holidays and Marian holy days from Latin America, such as the Virgin of Suyapa from Honduras. “Without a doubt, our community lets off steam and lets us feel at home,” Fred said. “That moment allows us to make real the word of God in all its meaning.”

Of the first day he arrived at Notre Dame aux Riches Claires, he said, “I will not be able to forget easily, I took my family in my arms and we cried deeply.”

“At first I thought it was because we had found the answer to our worries, but little by little I understood that we actually cried because we found our family through the words and affection of the members of this valuable community,” Fred said.

That kind of welcome is an experience the church has been aiming to create for the past 30 years. “What we want is to accompany people and help them in their efforts to integrate to the life [in Belgium], but we want an integration without losing our original identity,” Father Escobar said.

Elba Guzmán, a Salvadoran, has been attending the church for nearly 19 years. Notre Damehas been a home away from home, but it is also where she learned French, thanks to classes the parish offers every Saturday. “And I’ve always cooked for special occasions, like the days when we celebrate Monsignor Romero,” she said.

At Riches Claires she found referrals for a job as a domestic worker, and Ms. Guzmán remembers gratefully how the parish priests and laypeople made themselves available to parishioners. “If we called them at midnight for a problem with our children, they would come to us,” she said.

Despite far-right gains in European election, there is hope for Pope Francis’ new humanism
Austen Ivereigh

Clergy and staff here point migrants to relevant social workers, lawyers and nongovernmental organizations, as well as to jobs and temporary housing. Most of the parishioners at Riches Claires are from modest backgrounds, but people from all walks of life attend the church; here you may see ambassadors sit next to people without documentation.

Despite the parish’s history and, ironically enough considering her own background as an immigrant to Belgium, Ms. Guzmán and others at Riches Claires say they have grown weary of this latest wave of Central American and Venezuelan refugees coming here.

“Not everything is rosy,” Father Escobar acknowledged, “and many times in our community we have to face our own fears.” Established communities of migrants have grown anxious that this latest wave of newcomers may take “their” jobs or receive more state benefits, or that Belgium’s immigration policy may become more restrictive because of their arrival.

And the newer the people, the more vulnerable they are to fall into traps. “There are networks of labor exploitation, human trafficking and abuses within the community,” Father Escobar said.

For Fred, Notre Dame aux Riches Claires has provided consolation, calming his anguish as a refugee from a different land. “We had fear, many doubts, a great emptiness and a deep sadness [when we arrived] that only my faith in God could calm,” he said. “And thanks to the need to be in contact with God, we came to Riches Claires.”

Brussels follows the lead of the Catholic Church in Germany, which is led by the likes of Walter Kasper, Card. Marx et al. The Catholic Churches in the north of Europe have been decimated by poor leadership and the failures of Vatican 2. Church attendance and worship of God has plummeted dramatically. Many churches have been closed, repurposed, and even sold to religions that totally reject God Jesus Christ!

Migrants are keeping the Church alive in different parts of the developed world.