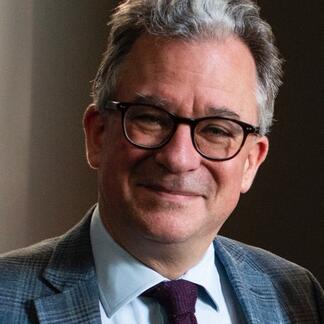 Austen Ivereigh
Austen Ivereigh is a Fellow in Contemporary Church History at Campion Hall, at the University of Oxford. His latest book is Wounded Shepherd: Pope Francis’s Struggle to Convert the Catholic Church, published by Henry Holt.
@austeni
Articles by Austen Ivereigh 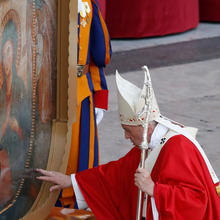 FaithVatican Dispatch
Pope Francis calls upon the Catholic charismatic community to work for justice
Austen IvereighMay 30, 2020
The pope’s message poses a sharp challenge to a movement known more for personal conversion and evangelization than practical mercy. 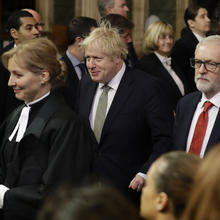 Politics & SocietyDispatches
After Boris gets Brexit done, what’s next for Britain?
Austen IvereighDecember 20, 2019
As dawn broke after polling day, it was clear that the Boris Johnson earthquake had shattered the “red wall” of Labour strongholds across north Wales and in England’s northwest, Midlands and northeast. 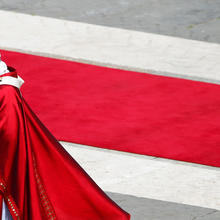 FaithFeatures
Is Francis our first charismatic pope?
Austen IvereighJune 14, 2019
Francis may not pray in tongues, writes Austen Ivereigh, but no pope has ever identified as closely with the Catholic Charismatic Renewal, nor been so keen to move it front and center of the church. 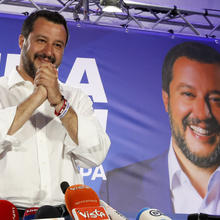 Politics & SocietyDispatches
Despite far-right gains in European election, there is hope for Pope Francis’ new humanism
Austen IvereighMay 31, 2019
The big story in the European elections, writes Austen Ivereigh, was the collapse of the centrist governing coalition, with a multiplicity of small parties on the rise. One hopeful sign: A record voter turnout. 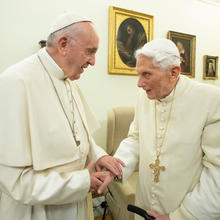 FaithShort Take
Pope Benedict’s letter on sex abuse is not an attack on Francis (or Vatican II)
Austen IvereighApril 11, 2019
The pope and the pope emeritus are not so far apart: Both Benedict and Francis warn against responding to the abuse crisis with a ’self-made’ church that ignores the Gospel. 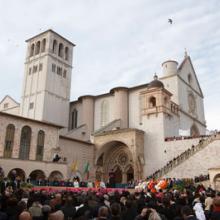 What Assisi Has Lost: A report from the meeting of religious leaders
Austen IvereighNovember 14, 2011

Of all the challenges faced by the Vatican in organizing the 25th anniversary of the historic interreligious gathering in Assisi in 1986, the hardest was how to make it newsworthy. The 176 delegates—representing, said the Vatican, ”not only the world's religions, but all people of good will, everyone seeking the truth”—whom Pope Benedict XVI led by train from Rome to the town of St Francis were comprehensive in their diversity. But if the Christian delegations on October 27 included the top men—Pope Benedict himself, the Archbishop of Canterbury and the Ecumenical Patriarch, Bartholomew I—the delegates from Judaism, Islam, Hinduism, Buddhism and others included no obvious celebrities, or even organizations whose presence might have raised an eyebrow. Even the inclusion of four non-believers failed to create a stir, for it was not Richard Dawkins or Christopher Hitchens standing with the pope but little-known academic philosophers.

In purely news terms, of course, 2011 couldn’t compare with the pure gold of the original 1986 gathering. The sight of Christian leaders standing in a semi-circle in the basilica dedicated to St Francis together with the Dalai Lama and a rainbow of sashes, robes and elaborate headgear was unprecedented. The 160 leaders of the great world religions called by Pope John Paul I did not “pray together,” exactly, but “came together in public to pray at the same time.” That distinction was lost on most observers, who still remember the ritual fires, the drums and the feathers, and the invocations of spirits. The scenes confirmed the fears of the then Cardinal Joseph Ratzinger, who famously boycotted the gathering.

But that first Assisi gathering caught the imagination of the world. Alarmed at the deep freeze in superpower relations, Pope John Paul II had summoned—as no one but a pope could—the spiritual energy of the world’s faiths, and put in train a movement among religions at the service of peace in the world. The theology was simple: the Catholic Church, whose task is to communicate the Gospel, seeks to further the global common good, and encourage the message of peace which is at the heart of every faith. And where better than in the town of il poverello, who had tamed the ferocious wolf of Gubbio, leap-frogged the walls of war and spoken to the Sultan?

If the 2011 gathering seemed less dramatic, it was partly because of the obscurity of the non-Christian delegates, and partly because the centerpiece of the 1986 action—the public act of prayer—was now missing. At the first Assisi réprise in 2002—when John Paul II, by now frail, again gathered the religious leaders to chase away the dark clouds of 9/11—the delegates prayed in their faith groups in different locations in Assisi, rather than in public. But prayer was still the point.

This time it was different. Rather than a day of prayer it was a “pilgrimage,” a time of “reflection and dialogue,” with each participant being assigned a room in a retreat house for “a time of silence for reflection and/or personal prayer.” The only public acts were speeches that were short and lacking in content.

Yet that did not stop a number of deities being invoked. “O infinite-bodied Lord! I see YOU in each hand and feet, in each eye and head, in each name and being,” prayed one Hindu delegate, while the Ifu and Yoruba representative began with an untranslated invocatory chant. Recalling his concern after 1986 to make clear that “there is no such thing . . . as a common concept of God or belief in God,” it must have been difficult for Pope Benedict to hear a swami announce that “truth is one” even though “professed in different ways.”

The other absentee at this year’s gathering was the Spirit of Assisi. The term was first used by Pope John Paul II when he received the 1986 delegates at an audience in Rome two days after the event. “Let us continue to spread the message of peace,” he told them; “let us continue to live the Spirit of Assisi.” The term, popularized by the Franciscans, has been used by Sant’Egidio at the interfaith gatherings—held “in the Spirit of Assisi”  —they have organized every year since then.  It was used by the founder of the Bose monastic movement, Enzo Bianchi, who wrote in La Stampa that the gathering of  October 27 showed that Benedict XVI had “made his own the Spirit of Assisi,” which he described as the church’s “truly universal mission”, one demanding respect for all faiths and the religious path of each person. And the phrase is the title of an article in the Messenger of St Anthony by the Custodian of the Basilica of St Francis, Giuseppe Piemontese OFM Conv. And it was invoked, on 27 October, in the speech by Patriarch Bartholomew I, who described it as “the capacity of faiths in dialogue to infuse society with peace.”

Yet in the Pope’s addresses in Assisi and in the many documents and speeches in the run-up to the event by curial officials, including a long series of articles in Osservatore Romano, the term is carefully avoided. This reflects the view that, like “the Spirit of Vatican II,” it has been tainted by errors—in this case the “syncretistic interpretations” of 1986.

It wasn’t just Rome’s theological squeamishness that left Assisi III feeling flat but another absence, the spirit of community. Key to the organization of Assisi I and II were both Sant’Egidio and Focolare, movements of young Italians deeply committed to reconciliation across boundaries; it was their relationships which Cardinal Etchegaray drew upon in 1986 and 2002 in extending invitations to religious leaders. But while the movements were present on October 27—Focolare arranged the music and dance at the afternoon ceremony at the Basilica of St Francis; the founder and president of Sant’Egidio were both on the delegates’ train—the organization was this time firmly in the hands of the Curia. It meant that, despite warm embraces at the end, the atmosphere this time, and unlike 1986 and 2002, was mostly that of a conference or summit, rather than what Italians call un incontro.

This was reinforced by the presence of the “nonbelievers” among the delegates, included for the first time at the Assisi gatherings at the Pope’s request. The four academic humanists had been invited by Cardinal Gianfranco Ravasi’s Council for the New Evangelization, whose Courtyard of the Gentiles project aims to build bridges with atheists and secularists in post-Christian Europe.  The speeches by the French-Bulgarian academic Julia Kristeva and by Guillermo Hurtado of Mexico made clear that these were “humanists in dialogue with believers” and therefore much more like searching agnostics than committed secularists. 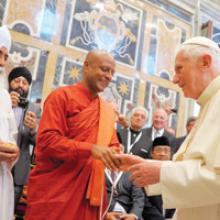 Signs Of the Times
The Quest for Peace Continues At Assisi Gathering
Austen IvereighNovember 14, 2011

The event marked the 25th anniversary of the first interreligious gathering in the hometown of St. Francis, called in 1986 by Pope John Paul II.

In All Things
Anything could follow the conversion of St Paul's
Austen IvereighNovember 02, 2011
LONDON You do not need to be a close observer of the drama centered this past fortnight on St Paul s Cathedral and the protesters encamped there to notice today a great shift one that carries strong implications for the relationship of Anglican Christianity with the world of finance nbsp Two we

In All Things
The test of Assisi III lies in the future
Austen IvereighOctober 27, 2011
BASILICA DI SAN FRANCESCO ASSISI As I write this Pope Benedict has just left with heads of the delegations of different faiths back to Rome where tomorrow he will greet them again in an audience in the Apostolic Palace I will be analysing today s event in detail in a forthcoming article for Am

In All Things
Pope in Assisi calls for purifying of faith
Austen IvereighOctober 27, 2011
BASILICA DI SAN FRANCESCO ASSISI Speaking to some 300 representatives of the world s major religions gathered in the Basilica of Santa Maria degli Angeli Pope Benedict XVI this morning expressed shame for the complicity of faith in violence and praised agnostics and other searchers for helping