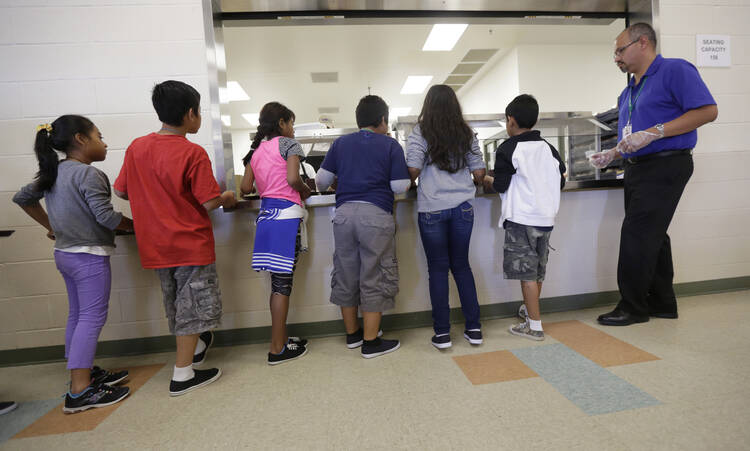 Detained immigrant children line up in the cafeteria in this Sept. 10, 2014 file photo at the Karnes County Residential Center, a detention center for immigrant families operated by the GEO Group in Karnes City, Texas. (AP Photo/Eric Gay, File)

The GEO Group, a for-profit provider of “diversified correctional and community reentry services” for local and state governments, faced a rare challenge from its own shareholders on May 7, when they approved a resolution proposed by the Jesuits West province of the Society of Jesus. The province requested that GEO, which runs 134 facilities around the world—including 69 detention centers in the United States—“report annually…on how it implements” its human rights policy.

For years now, GEO facilities have been the subject of a litany of horror stories. Multiple suits have been filed by detainees in different facilities who contend that they are forced to work for food and sometimes placed in solitary confinement if they do not; that detention facilities for undocumented migrants are structured as though detainees are criminals, with metal detectors, jumpsuits and no access to telephones; and that cells have been set aside in a GEO youth prison for fights instigated by the guards.

GEO’s Immigration and Customs Enforcement processing facility in Adelanto, Calif., which can house 1,940 detainees, was named the “deadliest ICE detention center” in 2017 by the Detention Watch Network and other organizations, after three men died and at least five other detainees attempted suicide. In 2015 the facility was forced to turn over its medical care to an outside organization after a government investigation found its care substandard—an evaluation the U.S. Department of Justice has also leveled against other GEO facilities.

Jesuits West province requested that GEO, which runs 134 facilities around the world—including 69 detention centers in the United States—“report annually…on how it implements” its human rights policy.

Last October the Department of Homeland Security once again recommended a full review of the facility after an unannounced inspection turned up nooses made from bedsheets in 15 of 20 cells visited; 14 detainees under disciplinary segregation without having been found guilty of anything; and detainees reporting they had to wait “weeks and months” to see doctors while the facility’s dentist brushed aside the need for fillings and encouraged detainees to floss using thread from their socks.

And in February of this year another detainee, age 27, collapsed at the facility and later died of an apparent cerebral hemorrhage. His wife had given birth to their son just three days earlier; the man was terrified he would be deported without ever getting to meet him. He himself had not lived in Mexico since he was 4 years old. His family are demanding the medical records to see what kind of medical care he received from GEO after he collapsed.

Jesuits West was one of a number of religious organizations that bought a small number of shares in GEO nine years ago with the intention of influencing corporate policy and standards. Their ongoing dialogue with GEO Group management led to the company instituting a human rights policy for the first time in 2013.

But when Jesuits West recently requested that GEO offer a yearly report on the implementation of its human rights policy, GEO management initially balked, arguing that answering these questions might violate the company’s contracts with state and federal governments. Bryan Pham, S.J., became the point person for Jesuits West on the matter in the fall of 2018.

“The information in the press about how inmates are being treated, the violence, the sexual assaults, the suicide attempts—there are indications that there’s something not right in these institutions.”

The Jesuit province proposed a resolution on the matter for the annual shareholders meeting. GEO executives appealed to the Securities and Exchange Commission in an attempt to prevent the resolution from reaching shareholders, but ultimately the S.E.C. overruled GEO’s concerns and allowed the resolution to be considered.

Father Pham explains that just getting that far had already been a win for those backing the resolution because it gave them a platform to publicly express their concerns, in itself a great opportunity to press for change. Roughly 1,000 shareholders participated in a conference call on the resolution on May 7th. “GEO hasn’t told us the numbers yet; they’ve said those who support the resolution outweigh those who oppose it.”

Father Pham acknowledges that the resolution is non-binding. “Even if 99.9 percent of the shareholders agree with us, the company does not have to do anything,” he said, explaining that, all the same, a vote like this should pressure GEO executives to do better. “If they don’t do something, they’re not being responsible to the will of the shareholders,” he said.

It appears, however, company officials do plan to respond. According to a GEO Group spokesperson, issuing a statement by email, the company “never objected to the publication of report as requested in the shareholder proposal.”

He explained that company officials initially felt, however, that a 2020 timeline for publication of a human rights report was more appropriate. They have now agreed to an accelerated timeline. That will mean shareholders can expect a human rights report in September 2019, “which will help our stakeholders better understand our long-standing commitment to respecting human rights and will over time incorporate appropriate metrics to measure our performance.” He added, “We are evaluating the appropriate metrics for this important report, and we would expect to continuously refine and improve our disclosures annually.”

Men are struggling with their spirituality. Can the Catholic Church help?
Jim McDermott

Father Pham will no doubt be among its interested readers. While Jesuits West will remain GEO shareholders, he remains skeptical of the model of for-profit detention facilities. “There’s an inherent conflict of interest when prisons are not operated by the government,” he argued. “It’s to a company’s benefit to keep more people in prison and to cut corners because saving money means making money. That’s not how government is supposed to work.”

The shareholder vote, he said, “is a ray of hope.”

“The information in the press about how inmates are being treated, the violence, the sexual assaults, the suicide attempts...are indications that there’s something not right in these institutions,” Father Pham said. “And I think when shareholders chose to support our resolution, they’re saying essentially that making money is important, but so is the dignity of the person, the care of the person.

“It’s a sign that what happens [inside] our prisons and detention centers is important.”