Accompanying undocumented immigrants is “the Catholic thing to do” 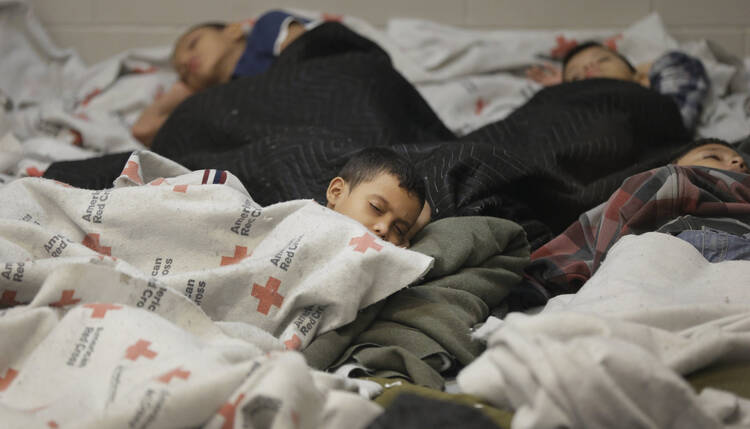 At the time, it did not seem like a big deal. Young men chatted up the schoolgirls every morning. Selena Guadalupe Valladares was one of them.

Her rural town in El Salvador sits between the turf of two powerful Salvadoran gangs. She said she would hear gunshots and see dead bodies in the streets as a child. The gang members who watched her and her friends “liked to see the little girls,” Ms. Valladares said in an interview with America.

“I was 14 when they started talking to me, telling me things like they’re in love with me,” she said. She was afraid, but she never imagined how badly things could go. A gang member asked another girl, whom Ms. Valladares knew from church gatherings, to be his girlfriend. But the girl refused.

The gang killed that girl. They kidnapped her, raped her and spread her body parts around a field of mango trees in front of Ms. Valladares’s house.

A gang member asked another girl to be his girlfriend. But the girl refused. The gang killed that girl.

“No one could do anything about it,” she said. “If you reported it to the police, [the gang] would kill you.”

Still, she never wanted to leave her family and come to the United States. Ms. Valladares, who has been living in California for five years, still has two younger siblings who live in El Salvador with her parents.

Ms. Valladares is part of the Catholic Accompaniment and Reflection Experience program, an initiative by the U.S. Conference of Catholic Bishops that is being piloted in the archdioceses of San Francisco and Indianapolis. The program connects volunteers with undocumented members of the community who need support. The program helps them integrate into their communities while they comply with immigration proceedings.

“It’s the Catholic thing to do,” according to Diana Otero, the director of immigration program services at Catholic Charities in San Francisco. Ms. Otero came to the United States 19 years ago from Colombia.

“I found myself on my own without any support,” she said. Then she met a family who stepped in and helped her set up a bank account and get a job. They even brought her soup and crackers when she got food poisoning.

In San Mateo, Catholic Charities serves 75 unaccompanied minors, the youngest of whom arrived when she was 5.

“I know how important it is to know someone who can help you integrate into America,” Ms. Otero said. “When I think of my clients in the community, I want to make sure they have that. As Catholics, we’re supposed to welcome the stranger.”

In San Mateo, Calif., Catholic Charities serves 75 unaccompanied minors, the youngest of whom arrived in the United States when she was 5. Ms. Otero described them as a “very vulnerable population,” with more than 65 percent being unable to reunite with their parents. While Catholic Charities helps with legal services, volunteers step in to support in other ways, like checking in with them weekly and accompanying them to doctor’s visits.

The vast majority of the unaccompanied minors—95 percent, according to Ms. Otero—are from Honduras, El Salvador and Guatemala. These Central American countries have been beset by violence and gangs for years. Like Ms. Valladares, unaccompanied minors come to the United States because they fear for their lives. Some also experience traumatic events on their journey north.

“We had a kid who tried to commit suicide,” Ms. Otero said. Those who arrive unaccompanied often need counseling and help with their studies. Yet sometimes, they just want help putting together a game of soccer.

“If we change the world for one little kid, it will have an amazing impact on his family and his community.”

“We have free, beautiful parks,” Ms. Otero said, “but to play soccer, you need a team!”

María Antonia Hernandez arrived in the United States from Mexico three years ago. She was 17 and presented herself at the San Ysidro port of entry to ask for asylum.

“Things are very difficult there,” she said of her home state of Michoacán, a crime-ridden area known as a home to drug cartels. “They threaten you. The little you have, they take away.”

Ms. Hernandez said she always wanted to come to the United States, but her mother told her, “Either you get in line and cross legally or you’re not going.” She did that and has been working since she arrived.

“In the United States, you have to work if you want to make something of yourself,” she said. “People think it’s easy, but it isn’t. You have to work every day to pay your bills. But there, with the drugs and the crime, you never know what’s going to happen to you. Here, you’re safe.”

What lies in the heart of an ICE officer?
Joe Hoover, S.J.

Ms. Hernandez sends money back home to her mother who, at 60, still works in the fields.

“I don’t want her to have to work anymore,” she said. Ms. Hernandez, who has 11 siblings, said the hardest part about coming to the United States is being separated from her loved ones. She said she is not sure if she will ever see her parents again, but she hopes she will.

“I want to learn to speak English, and I know I can do it!” Ms. Hernandez said.

The accompaniment program is helping her do that, Ms. Otero said.

“The idea is that they are a stranger, on the outside; how do you help them feel like they are one of us, one body in Christ? If we change the world for one little kid, it will have an amazing impact on his family and his community,” she said. “We can do a lot. These kids need us.”

Years ago, I worked at a group home caring for disabled men along with several immigrants from Liberia. They had fled from a brutal civil war to have a better life in our nation. I now live in a nursing home, and a number of the staff are immigrants from African nations. I'm a pro-life moderate Republican who reluctantly voted for President Trump. However, I oppose his proposal to spend more than $5 billion to build a more technically "detailed" wall along the U. S./Mexico border. Also, I believe .that Congress and the President have a responsibility to find a way to allow illegal immigrants to become citizens. Finally, since so many immigrants are arriving to escape unspeakable violence in their homelands, I believe our government should assist with the economic development of the nations wracked by violence and poverty.

you mean the mother who is still working in the fields had 12 children.? No wonder the gangs have plenty of people to recruit. We need to make immigrants from these "good Catholic" countries have birth control education as a condition of entry. As Pope Francis might say, "breeding like rabbits" is not a job skill that America needs!

"Undocumented." That single dishonest term speaks volumes. It says that the United States does not have the right to determine who enters and stays here. It says that there is no citizenship and that borders are illegitimate.

When I was a stranger, you welcomed me - says the Lord.