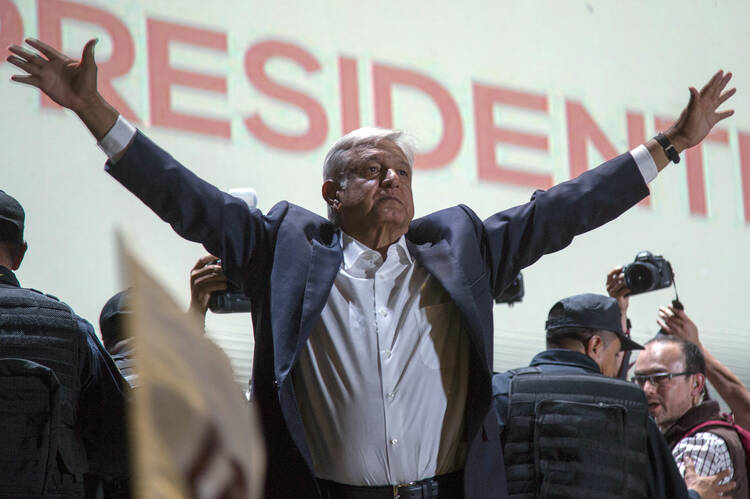 Andrés Manuel López Obrador hesitated for a moment last April 13 when Archbishop Victor Sánchez of the Diocese of Puebla, Mexico, asked the candidate for the Mexican presidency whether he was a practicing Catholic. “Yes, I am a Catholic; my life has been strongly related to the Catholic church. I was even an acolyte,” Mr. López Obrador said.

It was, initially, a satisfactory answer for the 125 bishops gathered near Mexico City during a spring conclave during which they received all four candidates then prepping for Mexico’s presidential election. It was Mr. López Obrador who won the job in a landslide on July 1.

The second part of Mr. López Obrador’s answer to the bishop was less clear. “I like to say that I’m a Christian. All Catholics are Christians.”

Ambiguity on the question of his faith life has long followed Mr. López Obrador, a former mayor of Mexico City (2000-2005). While religion, as America reported, did not seem to play an important role during the campaign, the issue of the president-elect’s religiosity and his relationship with the church and matters of faith will likely become more prominent as the country prepares for his inauguration on Dec. 1.

This is partly due to the significant public mandate that AMLO, as Mr. López Obrador is popularly known, won on July 1. He amassed an impressive 53 percent of the vote, more than any other Mexican presidential candidate since 1982, and the coalition of three parties he formed captured a majority in Mexico’s Congress and most state legislatures. It also gained governorships in four states and its candidate Claudia Sheinbaum Pardo was elected mayor of Mexico City.

“López Obrador’s mandate is clear and very strong. He has lots of good will from the Mexican people, and he should be able to achieve a great deal.”

The winning “Together We Will Make History”coalition includes the Movement for National Regeneration (Morena), a party the president-elect himself founded; its traditional ally the Labor Party (abbreviated in Spanish as P.T.); and the Social Encounter Party (P.E.S.), a recently founded, socially conservative political movement dominated by evangelical Christians. By aligning itself with Mr. López Obrador, P.E.S. has grown from a fringe party to the fourth largest faction in both chambers of Mexico’s Congress, surpassing the historic political powerhouse of the Institutional Revolutionary Party (P.R.I.) of the outgoing president Enrique Peña Nieto, which was badly beaten this year.

“López Obrador’s mandate is clear and very strong,” John Ackerman, a law scholar at the National Autonomous University, told America. Mr. Ackerman has been one of the president-elect’s most vocal supporters in recent years and his wife, Irma Sandoval, a prominent academic, is expected to become a member of the next cabinet. “He has lots of good will from the Mexican people, and he should be able to achieve a great deal.”

What do this huge mandate and a conservative evangelical party in his alliance mean as far as the next president’s relationship with the church? Political and church observers in Mexico are not quite sure yet. That is partly because of Mr. López Obrador’s own, somewhat enigmatic comments on his own religiosity and the fact that he spoke very little about social issues during the campaign.

Many have speculated that Mr. López Obrador, who was raised in a Catholic household, may have privately switched to evangelical Christianity at some point during the past two decades, despite what he told the bishops in April. The rumors resurfaced this spring, when, in a March 20 column, El Financiero commentator Raymundo Riva Palacio wrote that Mr. López Obrador belongs to a Seventh-day Adventist church.

That church promptly denied that the president-elect was a member and in a video recorded 10 days later as a response, AMLO declared that “Christ is love and justice is love,” but he did not elaborate on which Christian denomination best represented his personal beliefs. Three weeks later, at the bishops’ conclave, he finally appeared to settle the issue.

The president-elect’s promotion of Mexican nationalism and social and economic justice, at the same time he professes profound religious beliefs, is rooted in his admiration for Benito Juárez, Mexico’s great liberal reformer

“It should be clear that López Obrador is Catholic; he has never denied that. He does play a little with ambiguity sometimes,” said the Rev. Hugo Valdemar, a former spokesperson of the Mexico City Archdiocese and former editor of its magazine, Desde la Fe. Father Valdemar has known Mr. López Obrador for years, especially during his term as Mexico City mayor. “He isn’t practicing, but he grew up in a Catholic environment and shares many of the church’s values.”

Bernardo Barranco, a sociologist and one of the country’s foremost observers of the relationship between politics and the church, agrees. “There’s an intentional lack of clarity in how he speaks of his faith in public, but we can ultimately understand him as being Catholic,” he told America. “Perhaps the best evidence is that he has an image of the Virgin of Our Lady of Guadalupe in his wallet.”

Whatever his religious beliefs, Mr. López Obrador’s political platform is decidedly secular and nationalistic. As president he intends to place a heavy emphasis on combating corruption, which he and his political allies believe to be the root cause of the criminal violence, poverty and inequality that plague the country. Socially liberal policies, such as legalized abortion and same-sex marriage, that have come to preoccupy people in the capital, play little to no role in the plans for the incoming government.

The president-elect’s promotion of Mexican nationalism and social and economic justice, at the same time he professes profound religious beliefs, is rooted in his admiration for Benito Juárez, Mexico’s great liberal reformer of the 19th century. Juárez, who acted as the country’s first indigenous president between 1858 and 1872, was the architect of the separation between church and state in Mexico, which is among the strictest in the world. He also promoted education, minority rights and a modernization of the economy.

“López Obrador is, above all, a juarista, meaning he supports the idea of a radical separation between church and state,” Mr. Ackerman said. He explained that the incoming president’s personal beliefs “mostly translate” to Christian concepts like “love thy neighbor” and “the belief in the goodness of humanity.”

“He does, however, support religious plurality,” Mr. Ackerman added, “and has always had a relationship of respect with the Roman Catholic Church.”

The political alliance that pushed Mr. López Obrador to victory represents that religious plurality. Morena and the P.T. contain radical leftist and liberal currents, while P.E.S. shares many of the values of the more orthodox wing of the Mexican Catholic Church.

“AMLO’s moral agenda will be defined by two poles,” Mr. Barranco told America. “There are the more radically secular leftist groups in Morena that are mostly focused on minorities, poverty and inequality. On the other hand, there’s his relationship with the neo-evangelicals of P.E.S., which politically I believe to be more relevant than his personal beliefs.”

As a result, despite Morena’s purported leftist agenda, the Catholic Church in Mexico expects to have a cordial relationship with the incoming government, according to Father Valdemar, who counts himself among the nation’s politically conservative clergy. Father Valdemar supports that notion by pointing out that AMLO’s bond with the church during his term as mayor of the capital was “magnificent.”

“That’s the point of reference we maintain when talking about López Obrador,” he said. “I can’t remember having a closer relationship than the one we had with him.”