Will the midterm elections results advance the immigration debate? 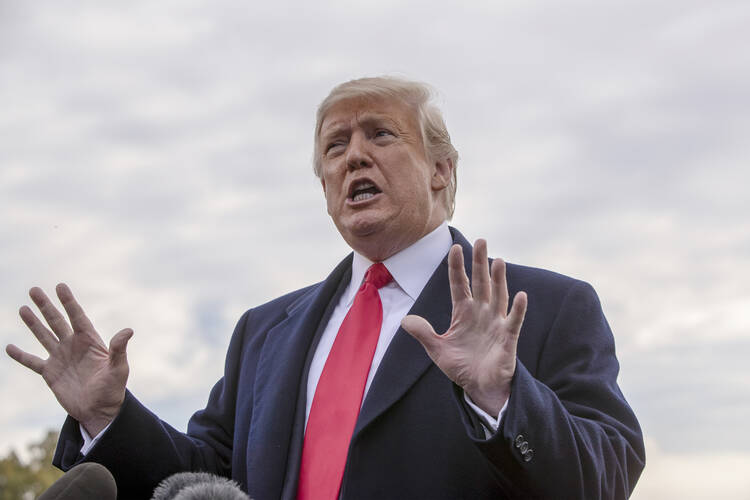 President Donald Trump talks to reporters about wanting to change the Fourteenth Amendment, before walking to Marine One on the South Lawn of the White House for a short flight to Andrews Air Force Base then on to Fort Myers, Fla., for a campaign rally ahead of the midterm elections, in Washington, Wednesday, Oct. 31, 2018. (AP Photo/J. Scott Applewhite)

President Trump made the migrant caravan,birthright citizenship and the future of Dreamers topics of contention in the days leading up to the midterm election. Exit polls indicated that immigration was second only to health care in the minds of voters.

In the end, though, the midterm elections played out much as expected, according to Ashley Feasley, the director of migration policy and public affairs at the U.S. Conference of Catholic Bishops. Democrats won control of the House of Representatives and Republicans added seats in the Senate.

“In terms of Democrats taking control of the House, we can expect to immediately see more oversight,” she told America. Among other immigration issues, Ms. Feasley expects that oversight to involve:

Ms. Feasley believes the House may pass legislation that helps T.P.S. recipients or Dreamers. But, given how polarized the two parties have become are on the issue, Ms. Feasley does not expect comprehensive immigration reform in the next two years.

“The framing that’s coming from the administration on immigration is troubling,” she added. “They see it as a winning issue. But this is not a talking point. Immigrants are human beings, and they are part of the fabric of American society.”

“The framing that’s coming from the administration on immigration is troubling. They see it as a winning issue. But this is not a talking point.”

Last month, the Trump administration characterized the migrant caravan of thousands seeking asylum as an “invasion.” On other occasions, including hisState of the Union address in January, Mr. Trump has introduced the topic of immigration reform with references to gang violence, terrorism and drug trafficking. The administration has also referred to family-based immigration, the process of legal residents and citizens petitions for relatives to legally enter the United States, as “chain migration.”

The Democratic House may also be an obstacle to Mr. Trump’s much-touted border wall between Mexico and the United States, Ms. Feasley said. “The wall is not just about security but has presidential implications,” she said, explaining that Mr. Trump likely sees it as a campaign promise he must deliver on.

“We need the money to build the wall—the whole wall, not pieces of it all over. And we are doing it,” Mr. Trump said during a nearly 90-minute press conference at the White House yesterday. “Many Democrats know we need the wall. And we’re just going to have to see what happens.”

The Democratic House may be an obstacle to Mr. Trump’s much-touted border wall.

After the midterms, the actual wall probably will not happen, according to Kevin Appleby, the senior director of international migration policy for the Center for Migration Studies of New York. “But we may see increased security measures,” he said, including an uptick in U.S. Border Patrol agents and surveillance technology.

Increased border security could be a part of a compromise legislation for T.P.S. recipients or Dreamers, Mr. Appleby said. On Monday, the Trump administration asked the Supreme Court to fast-track a ruling on DACA, which could put pressure on Congress to act.

“There are areas of common ground, I just don’t think immigration is one of them,” he said, acknowledging the possibility of cooperation on infrastructure spending. “I don’t see the contours of broad agreement. The bases of both parties are extreme—from ‘build the wall’ to ‘abolish ICE.’ But politics change.”

House oversight of the zero-tolerance border enforcement policy is overdue, according to Marisa Limón, the deputy director of the Hope Border Institute in El Paso, Tex. She said humanitarian groups are still seeing families separated at the border.

Recently, Immigration and Customs Enforcement officials have been releasing families from holding centers to the streets with ankle monitors, she said. The dioceses of El Paso and Tucson have been providing beds, clothing and other necessities to released families.

Children are still being detained in Tornillo, Tex., Ms. Limón said. There are hundreds camped out on bridges on the Mexican-side, waiting for their asylum claims to be heard. “We see it every day,” she said.

“There are areas of common ground, I just don’t think immigration is one of them.”

“But the president has had some traction with the speech promoting fear of the migrants,” Ms. Limón said. “He’s doubled down on that.”

Still, the strength of the harsh immigration talk may be waning. Ms. Feasley noted the midterm losses of Republican Congressmen Mike Coffman and Carlos Curbelo, who both lost in moderate districts. Mr. Trump’s harsh tone on immigration may have hurt these incumbents.

After the midterms, can the new Congress work together? Here’s where they could start.
The Editors

Latinos were more engaged in the midterm elections this year and have become increasingly concerned about their place in the United States during the Trump presidency, according to the Pew Research Center. Threats to end birthright citizenship, for example, may further alienate U.S.-born Latinos, who make up more than 37 million of the 56.5 million Hispanics living in the United States. What is more, the number of U.S.-born children of undocumented immigrants has dropped significantly since 2007.

“The framing is almost as important as the data itself. This is a human and community issue, not just a security issue,” Ms. Feasley said. “This kind of rhetoric is not only against Catholic social teaching; it is also not a cohesive formula for society. We need to candidly and deliberately delve into that a little bit more, reminding people of the human beings involved.”

It is unclear whether the departure of Attorney General Jeff Sessions could signal a change in the Trump administration’s approach to immigration. Mr. Sessions had been involved in many immigration crackdowns, including vowing to prosecute anyone who enters the United States illegally, tightening asylum conditions and announcing the end of DACA.

After talking to local best lawyers in the area, they feel this will trend in a better direction, We'll see.