Catholics need to take a stand against anti-Semitism 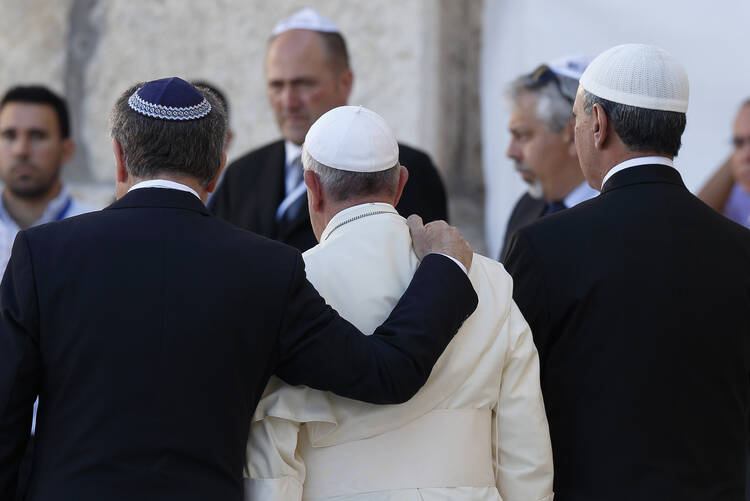 On Feb. 27, Archbishop Charles Chaput of Philadelphia denounced the rise in anti-Semitic attacks and threats to Jewish community centers in the United States. “As a community, we must...continually and loudly reject attempts to alienate and persecute the members of any religious tradition,” Archbishop Chaput said in a written statement. He called on “members of diverse faith and ethnic communities” to “stand up for one another and improve the quality of life for everyone by building bridges of trust and understanding.”

It is our duty to decry any instance of anti-Semitism as “a blasphemy against God’s chosen people.”

This statement arrives at a critical time. According to the Anti-Defamation League, in 2015 alone there were over 900 anti-Semitic incidents in the United States; over 10 percent occurred on college campuses. Last year also saw an increase in online harassment. According to the A.D.L. report “Anti-Semitic Targeting of Journalists During the 2016 President Campaign,” over 800 journalists received anti-Semitic tweets. And this year, there have been over 50 bomb threats called into Jewish communities across the country in the new year.

Political leaders in both major parties have condemned these anti-Semitic acts. After being criticized for his reticence on the subject, President Donald J. Trump last month described the threats as “painful and a very sad reminder of the work that still must be done to root out hate and prejudice and evil.” Institutions and communities with histories of anti-Semitism, including the Catholic Church, have even more pressing reasons to denounce these expressions of hate. Archbishop Chaput reminds us that as Christians, it is our duty to stand with our Jewish brothers and sisters and decry any instance of anti-Semitism as “a blasphemy against God’s chosen people.”

Anti-Catholicism is rife across the media, entertainment, and cultural landscapes.
And not only does it continue to grow worse year after year, it is completely *acceptable* in society. People have become completely *comfortable* in being vicious anti-Catholic bigots, eve in so-called "polite" company.
Turn on your television or open a popular web site, and the examples are rampant.

Anti-Semitism is wrong in every sense, but, unlike anti-Catholicism, it is universally condemned across our culture.
And let's be honest: These sick anti-Semitic acts are from fringe wackos and ne'er-do-wells.

When are Catholic leaders (including those in Catholic media) going to speak up against the incessant attacks on *us*?

I strongly applaud the determination and clarity of thought that defines America’s Editorial statement on Anti-Semitism. The contemporary Catholic Church, in light of the awful history of Europe in the 1930s and 1940s, cannot stand idly by when the specter of such heinous expression even threatens to emerge. Strong, bold, resilient and courageous commitment to this purpose ought not be extraordinary but must be the common, unsurprising position of all Christians. Now, might we hope too that Biblical scholars will, at last, find new (and acceptable) translations of scriptural texts that refer currently to “the Jews?” With the excuse of accuracy in translation, too many insist that this inapt usage be retained. We cannot allow ourselves to be blithely persuaded by that view, nor, can we, with abandon, fail to see its connection to Anti-Semitism.

In Denver, Chaput exhibited overt Islamophobic hatemongering either by himself or by one of his diocesan toadies and he seemed to be in unabashed sympathy with the unjust behavior of the Israeli Jews toward the Palestinian people. Of all the people in the American Catholic leadership that the Editors of America could have quoted to express the sense of its indignation over the recent anti-Jewish vandalism, why would they choose the words of the bigoted, intolerant Chaput? Along the same lines, why do the Editors insult its readership by employing the mendacious, racial-supremicist group, the ADL, as a credible source of information? Maybe the Editors need to aquire a better GPS as they drive down the information highway.

Eugene - I believe you have made this charge before about Islamophobia and the Archbishop, without ever describing the charge. Perhaps, you mean that any philosemitism is Islamophobic? Given that you call even the ADL racist, I think this helps explain the source of the new antisemitism.

Archbishop Chaput seems to be the intellectual leader of the American bishops. His responses to the events in Church and State seems to get at the heart of the issues and meet the right balance. He is always fearless, and intellectually rigorous, and wise. His fourth book "Strangers in a Strange Land" and his earlier "Render unto Caesar" are particularly relevant in these times. He also spoke regarding the dubia - http://www.catholicherald.co.uk/news/2017/03/03/archbishop-chaput-pope-francis-cannot-contradict-john-paul-ii-on-communion/

If you will allow a seemingly naive question but are not
the Children of Abraham Semites together, so be they Jews or Arabs
they are "Semites".

As for God's "Chosen People", I thought we were all God's Chosen
people once Jesus fulfilled the "Law".