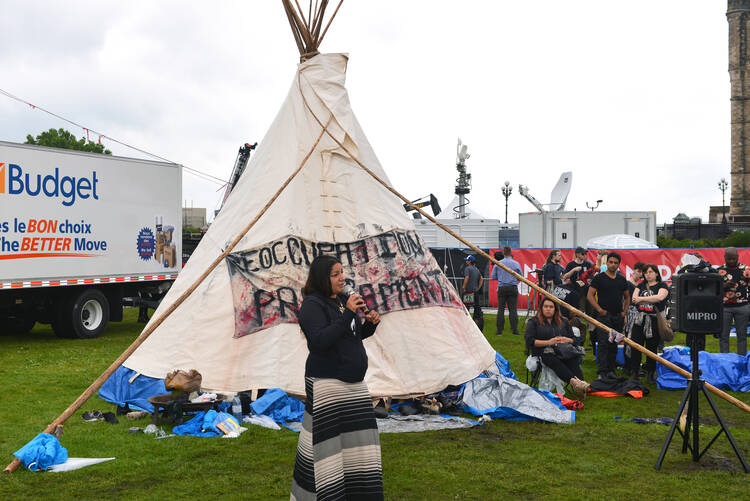 A teepee in Ottawa on June 30, 2017, erected as a symbol of rights for indigenous people. (iStock/PaulMcKinnon)

In late 2012, a grass-roots organization in Canada called Idle No More brought injustices faced by indigenous communities into the public eye, first through flash mobs in places like shopping malls and then by blocking major roads and railways. Often compared to movements like Occupy Wall Street and Black Lives Matter, Idle No More spread quickly across Canada, calling attention to a host of issues from water quality to the environmental effects of extractive industries, which include natural gas and oil in addition to mining.

The transit disruptions were used to justify an increasingly oppressive style of surveillance by Canada’s local and federal police agencies. This is according to a new book, Policing Indigenous Movements,by Jeffrey Monaghan and Andrew Crosby, researchers at Carleton University in Ottawa. By requesting documents under the Access to Information Act, Mr. Monaghan and Mr. Crosby trace how the rhetoric and laws developed in Canada in response to the attacks of Sept. 11, 2001, shifted from the perceived threat of Islamic terrorism to the perceived threat of indigenous groups.

Among the many government documents supporting their case, the authors identify notes written under the Integrated Terrorism Assessment Centre letterhead that seemed to explore the possibility of raising the threat level of indigenous movements to Canada’s highest terrorism category at the height of the Idle No More protests in January 2013. Other documents include a Royal Canadian Mounted Police warning of “violent aboriginal extremists.” This characterization has caused police to more closely monitor and to detain those involved in protests led by indigenous people; one example was last year’s tepee occupation in Ottawa, where nine demonstrators were arrested and detained.

“Jargon like ‘aboriginal extremists’ and ‘splinter groups’ obscures the actual concerns of protestors,” says Mr. Crosby. “They’re not talking about a community of thousands of people, like in the Six Nations,” he adds, referring to a reserve in Ontario where major demonstrations over land disputes have occurred. “They’re breaking it down into radicals and extremists.”

Mr. Monaghan and Mr. Crosby also note a convergence of interests for policing agencies and extraction companies, symbolized by the use of the phrase “critical infrastructure” to refer to private industry and the need to protect it. Natural resources made up around 10 percent of the gross domestic product in Canada last year. But in August 2017, the Canadian Conference of Catholic Bishops issued a letter condemning the abuses of extractive industries based in Canada, including companies mining materials like gold, coal and copper.

The Canadian Conference of Catholic Bishops has issued a letter condemning the abuses of extractive industries based in Canada.

The close ties between natural resource industries and national security agencies are not a “conspiracy of capitalism,” Mr. Monaghan says, but a result of mining companies taking advantage of anti-terrorism tactics to suppress legitimate political protest. He adds that the information obtained by Canada’s extractive industries through their own private security and planning proved to be of interest to police agencies.

“What we argue gets produced out of this relationship is that not only are the companies institutionalized as part of national security,” says Mr. Monaghan, “but they also influence [national security agencies] in terms of norms. R.C.M.P. documents start talking about the importance of pipeline and mining jobs—plainly not the police’s business. But because of these connections, all of a sudden a cultural shift takes place, and police become advocates for [things like] pipelines.”

Though some Canadians welcomed a change in leadership style with the election of Justin Trudeau as prime minister in 2015, who emphasized the importance of “nation to nation dialogue” with indigenous peoples, Mr. Crosby and Mr. Monaghan say the culture that has emerged in Canada’s security agencies seems to influence elected officials more than the other way around.

Clashes between police and protestors at Standing Rock in 2016 and 2017 left a dramatic mark on environmental activism.

Clashes between police and protestors at Standing Rock in 2016 and 2017 left a dramatic mark on environmental activism and the resistance to expanding the oil industry in the United States and Canada. Activists camped together for months in an attempt to prevent the construction of the Dakota Access Pipeline in North Dakota; the protests escalated until February 2017, when the National Guard and law enforcement broke up the encampment using water hoses in freezing temperatures. Since Mr. Trudeau approved the expansion of the Trans Mountain pipeline, which runs from Alberta to the west coast of Canada, in late 2016, commentators have speculated about the possibility of similar clashes in Canada.

Mr. Trudeau received a memo about the implications of the Standing Rock protests for the Trans Mountain pipeline a week after his government announced its support for the project, and indigenous leaders themselves, like Chief Lee Spahan, made the connection deliberate.

On Aug. 30, a Federal Court of Appeal in Canada overturned the federal government’s approval of the expansion, citing a failure to consider the impact of increased tanker traffic and to have “meaningful dialogue” with indigenous people that “should lead to a demonstrably serious consideration of accommodation.” The expansion would have almost tripled the amount of oil presently flowing from Alberta’s controversial tar sands. Thirty minutes after the ruling, shareholders in Kinder Morgan, the company that owned the pipeline, voted almost unanimously to complete the sale of the project to the Canadian government for $4.5 billion, leaving the federal government with an unfinished project that would cost billions more to build. The government announced its plans to buy the pipeline in May, intending to be a short-term owner until another owner could be found.

Though the decision was seen as a temporary victory by those who oppose the pipeline, the ruling offers requirements for reevaluating the project and could be appealed to Canada’s Supreme Court. Mr. Trudeau has reiterated his commitment to getting the pipeline built but has said he will proceed by following the court’s recommendations.

Mr. Monaghan adds that although the court ruling may be a legal victory for those who oppose expanding the oil industry in Canada, it creates opportunities for further police surveillance of protest movements and for possible intervention if the project moves forward and meets resistance. He says the commitment of the federal government to see the project through, despite the requirement to have a two-way dialogue with indigenous people in Canada, highlights the limitations of electoral activity and the need for the same movements that have been the subject of increased police surveillance.

Mr. Monaghan and Mr. Crosby both say that while the close relationship between industry and security is a big problem, there are good reasons to remain hopeful. “The war on terror is getting old enough now that we should be able to get out of crisis mode and our anxieties from the last decade or two,” says Mr. Monaghan. “We need a more principled discussion about the resources put into policing and security when we have social issues that require attention.”

Despite the problems, he adds, “I like to think we’re trending in the right direction after a pretty long and bad trend.”

This is not surprising as this is what police are really for. The PA State Police were founded in 1905 for strike suppression. Local police could not be relied upon to fire on strikers.