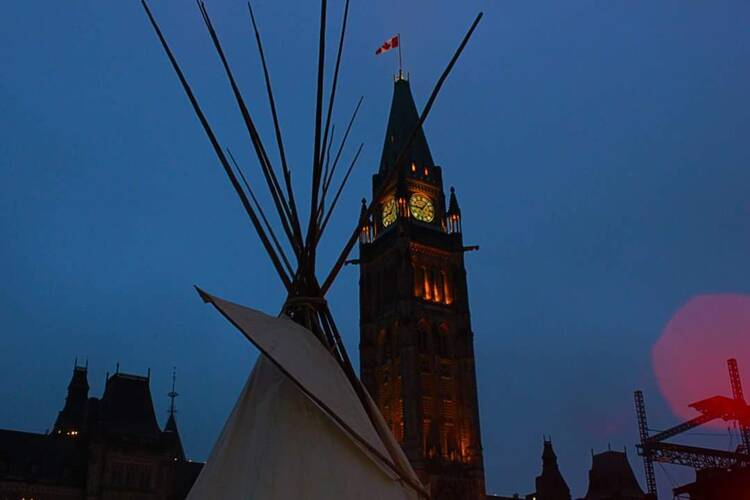 A tepee rises in protest outside Ottawa's Parliament. Photo by Ashley Courchene.

Canada is celebrating its 150th birthday this year, and with free national park access, hundreds of events and a large media campaign by the Canadian Broadcasting Corporation, the country is pulling out all the stops. But while Canadians revel in a long year of national pride, indigenous communities are crashing the parties and challenging the narrative.

In 1867, Canada was formally established through a federation of four provinces: New Brunswick, Nova Scotia, Ontario and Quebec. Over the next century and a half, the country would slowly grow to what we know as Canada today, adding six more provinces and three territories.

Canada’s Prime Minister Justin Trudeau highlighted the nation’s diversity and unity in a statement on Canada Day, July 1, but he also acknowledged wrongdoings in Canadian history. “As we mark Canada 150, we also recognize that for many, today is not an occasion for celebration. Indigenous Peoples in this country have faced oppression for centuries,” Mr. Trudeau wrote. The statement included a call for more efforts at reconciliation and mutual dialogue between the Canadian government and indigenous peoples.

Good multicultural intentions, however, are not enough, says Tanya Kappo, a Cree organizer behind Idle No More, a grassroots movement started in 2012 that presses for indigenous sovereignty, environmental protections and more. Those in government, she says, are “not listening to indigenous people and saying, ‘You’re right, how do we fix this?’ They say, ‘You’re right; you’ve been excluded, and this is how we are going to fix this.’”

Good multicultural intentions, however, are not enough, says one organizer.

Ms. Kappo says this year’s celebrations are encouraging many indigenous people to come to terms with their own history of exclusion, one that often gets lost in the story of how Canada came about, a story some indigenous voices say reflects a history of indigenous genocide. Ashley Courchene, a member of Sagkeeng First Nation and a political science student at Carleton University in Ottawa, Canada’s capital, describes the celebratory year as “a form of mental abuse,” with daily reminders of the persisting problems faced by indigenous communities juxtaposed against the Canadian government’s rhetorical endorsements of nation-to-nation dialogue.

“There’s a reason why there were a few native leaders who said the British talked with a forked tongue,” says Mr. Courchene. “That tradition has really carried on in Canada. It’s really tough to get through to the general public. Nobody really scratches the surface of what the prime minister is saying.”

During protests in June and July on Parliament Hill in Ottawa, Mr. Courchene witnessed this dynamic up close. He came initially to report on the protest for his podcast on Indigenous topics, “Skoden Chronicles,” but quickly joined a group of fellow students from Carleton University and the Bawaating Water Protectors, an indigenous-led environmental group from Ontario.

After clashing with police, the group erected a tepee where Canada Day celebrations were scheduled to take place on what organizers called unceded indigenous land. Amid the tensions, Mr. Trudeau and his wife, Sophie, were invited inside the tepee to listen to the organizers’ frustrations.

While the Trudeaus remained in the tepee for more than 30 minutes, Mr. Courchene says Mr. Trudeau “didn’t really hear anything. He was more surprised that an Indian knew of Thomas Hobbes than anything.” Protesters inside the tepee expressed their concerns, and Mr. Courchene focused on inadequate nation-to-nation dialogue. “I said the only reason we’re on the Hill today is because of our ancestors. And [Mr. Trudeau] says, ‘But I’m the first prime minister to come see you guys.’

“It was very self-congratulatory. Then he left; then the media shows up.” Mr. Courchene says many interviews with the protesters after the meeting were misrepresented “to show the great Canadian benevolence between the citizens and the prime minister.”

Mr. Courchene says Mr. Trudeau came as an ambassador of Canada, not as a prime minister. By setting up the tepee, says Mr. Courchene, the organizers were creating an alternative space of indigenous sovereignty outside Canada’s current legal framework. Though Mr. Trudeau said the protesters should be respected, their efforts to set up a second tepee were prevented by the police.

Indigenous frustrations in 2017 have been expressed in a variety of protests like the one on Parliament Hill, but Ms. Kappo says resistance to Canada’s colonial structures and mindset has to include more than protest. She and others are behind Resistance 150, a campaign to help indigenous people think about what resistance means to them as individuals and to indigenous people as a collective. For Ms. Kappo, part of that means connecting with and asserting her identity.

“It’s not specifically against a state action or decision or anything, but I’m getting myself back as a Cree person by learning one [Cree] word a day,” she says. Indigenous people are unable to celebrate Canada 150, she says, but they can celebrate that their communities are still here.

“For myself,” says Mr. Courchene, “I just started calling my grandmother saying, ‘Teach me words, phrases.’ It’s been a process for her as well.” He explains that when he was a child his grandmother was reluctant to pass down the language because of her experience in Canada’s infamous residential schools for indigenous children. Residential schools were established by the Canadian government and operated by many Christian communities, a majority of them Catholic, in order to “kill the Indian in the child” through dramatic assimilation efforts that sometimes included physical abuse.

Speaking of his grandmother’s willingness to teach him more about his tradition, Mr. Courchene says, “I think she sort of progressed in her own understanding of everything, and she’s more open to do that. I have access to a wealth of knowledge that I can sort of carry forward. I think reclamation is a huge part in resisting the settler society that exists.”

Both Ms. Kappo and Mr. Courchene say this year, though difficult, has been motivating for indigenous movements. “My mother says sometimes we’re like geese. If you watch geese fly, they act together, they fly together without anybody giving direction,” Mr. Courchene says. Citing a variety of indigenous actions around North America, he adds, “I think on the whole there was just this time where we collectively, not just our group but our respective nations, knew we needed to do something.”

Ms. Kappo says the year is timely, too, in light of the formal conclusion in 2015 of the Truth and Reconciliation Commission. That investigation aimed to give a public space for indigenous people to speak the truth about their experiences in residential schools. Ms. Kappo says the commission created a conversation around what reconciliation might look like that makes this year an important historical moment.

For now, however, she is hopeful about young indigenous people, like those protesters on Parliament Hill, or her son, who just graduated from college and hopes to work in renewable energy. For his part, Mr. Courchene says, “Whether it’s Canada 150 or Canada 155 it doesn’t matter—we still need to be working on making sure that we gain jurisdiction and access to our own land. I don’t think that type of work will ever stop.”