Immigration and the politicization of Mollie Tibbetts’s murder 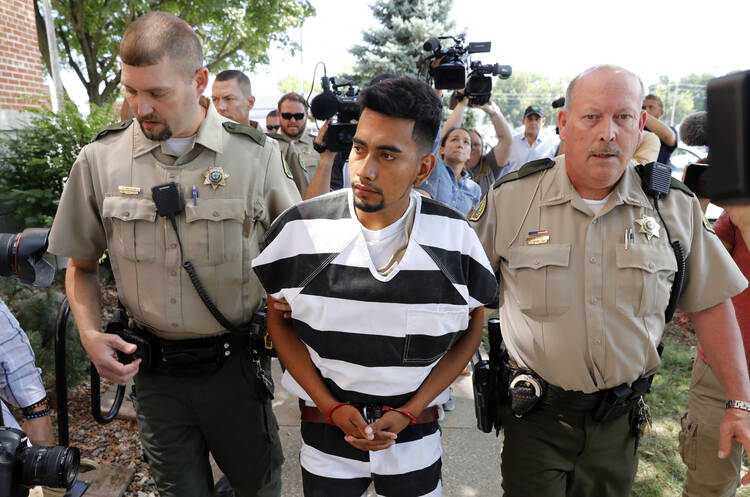 President Trump appears to be using the murder of a 20-year-old University of Iowa student to frame the national debate on immigration.

Authorities have charged Cristhian Bahena Rivera with the murder of Ms. Tibbetts, who had been missing since July. Mr. Rivera, an undocumented immigrant, led authorities to a body suspected to be Ms. Tibbetts on Tuesday, according to the Associated Press.

Ms. Tibbetts’s second cousin, Sam Lucas, accused the president and his supporters of politicizing the murder on Twitter: “attn Trumpists: Mollie’s death is not political propaganda to bring up your ‘build the wall’ bulls—.”

“This is a horrific crime and tragedy, and justice should be served,” Mr. Appleby said of Ms. Tibbetts’s death.

Political analysts have long anticipated that immigration would take center stage leading into the midterm elections. Immigration reform and border security are also expected to be major issues in upcoming federal budget negotiations.

“The president has turned immigration into simply good people, bad people and a wall,” said Christopher Kerr, the executive director of the Ignatian Solidarity Network. “Immigrants are moms and dads and children. They’re in the same schools, shop at the same grocery stores as we do. They’re not rapists or criminals or poison, as the president has said.”

According to the Center for Migration Studies in New York, multiple studies, including one by the libertarian Cato Institute, have confirmed that immigrants, legal or undocumented, are less likely than native-born citizens to commit serious crimes. “Immigrant communities are among the safest in the nation,” Kevin Appleby, the senior director of international immigration policy for the C.M.S., told America in an email.

From 1990 to 2013, the number of undocumented immigrants living in the United States rose from 3.5 million to 11 million. Yet the U.S. violent crime rate declined by 48 percent over the same period, according to F.B.I. data.. The idea that cases like the murder of Ms. Tibbetts by an undocumented immigrant are becoming more common is unsupported by these statistical trends.

“As Catholics, we believe they should be welcomed into the church, regardless of their legal status.”

“This is a horrific crime and tragedy, and justice should be served,” Mr. Appleby said of Ms. Tibbetts’s death. “However, such a tragedy should not be used to convict all immigrants for the act of one person or to dehumanize them collectively.”

The Ignatian Solidarity Network has sought to humanize immigrants through various campaigns, according to Mr. Kerr. Its campaign of hospitality in the United States and Canada has encouraged members of its network to get to know migrants in their communities. It has encouraged prayer for immigrant families, especially those separated at the U.S.-Mexico border. In churches, banners are placed that read, simply, “Immigrants and refugees welcome.”

Bishop Stowe: Heed the biblical admonition to love the migrant as yourself
John Stowe

“I have this dream that there will be a banner in every church,” Mr. Kerr said. “As Catholics, we believe they should be welcomed into the church, regardless of their legal status.”

“Immigrants and refugees make significant contributions to our country,” he said, noting that I.S.N. also advocates for recipients of Temporary Protected Status and recipients of the Deferred Action for Childhood Arrivals program. DACA, which was enacted by President Obama to protect undocumented immigrants who came to the United States as minors, has faced an uncertain fate since Attorney General Jeff Sessions attempted to end it a year ago.

“Immigrants and refugees should not be used as pawns,” Mr. Kerr said, paraphrasing the words of Pope Francis. “I worry that President Trump has done just that with DACA recipients, using them [as bargaining chips] to build his border wall.”

Ms. Tibbitts’s murder humanizes the reality of violent crime, Mr. Kerr said. “It’s good to talk about that,” he said. “But the human family is big. We have to humanize all of it.”

As usual, it's "politicization" to talk about the obvious: a person who has no right to be in the United States kills somebody who does. I hope Ms. Tibbetts was not "xenophobic" and adequately "welcoming" as she died. Tone deaf.

A Young Republican named Ted Bundy was a serial killer who confessed to brutally killing 36 young women. Therefore, Young Republicans should be rounded up and exiled. I guess.

Stan
Was Bundy an illegal Republican?

Stuart
Is there any other kind these days?

Stan
"Deflection" is an art you have perefected!

Bob Will
3 years 9 months ago

I can not speak for all but they say actions are louder than words. Our Cathedral is locked down every evening and you can not enter. The church needs to open up all it churches, and any other building they own if they are going to tell us not to build a wall. They can say we welcome all but not even a member can enter the church after 5 PM without proper codes and identification. So why is it so unchristian like for us to ask for the same for our country? Yes the man who has been arrested was here illegally why just like all liberals is our Church more concerned about a illegal person than they are the legal and good members of the Church, they no longer care about there faithful they care about those who break the law.

When someone begins a sentence with the word Trump, be sure that common sense would be a casualty. The most favorite tool of any politician of any stripe is to use the "example," those that are prominently placed in the visitors gallery during the State of the Union address.
Even the Church recognizes that America needs Immigration reform and the President is simply using an effective tool to throw light on the subject.
A larger issue, between Catholics, is in fact politics. Liberal Catholics view Conservative Catholics as stupid, while Conservative Catholics view their liberal counterparts as having a herd mentality - "if it feels good - do it," or worse - an entitlement to power,"
If we examine the issues honestly from a political standpoint who amongst us may have saved us from the quickie divorce, or using the word "choice" for babies, government paid abortions, contraception on demand, proliferation of pornography, transgenderism, same sex marriage, no prayer in schools and the latest discrimination laws that would literally outlaw free speech.
Trump is the wrecking ball that has given us pause, an opportunity to think. Is it not about time that we simply stopped shouting at one another - is that not the Christian thing to do?

The uncomfortable truth is that, if we "politicize" gun control following mass shooting (and we should since this is a pressing policy issue), then it is difficult to argue that Trump & Co. can't/shouldn't do it with this poor woman's murder. In a purely strategic way, the opposition looks two-faced in arguing against politicization. And, yes, it is true that immigrants--documented & undocumented-- commit fewer crimes. But opponents argue that the crime numbers will decrease by stopping illegal immigration since these arrivals have no legal right to be here in the first place.

(I write this as someone who supports DACA, a pathway to citizenship for longstanding undocumented Americans, & a lifting of the immigration quotas for Mexico & Central American countries.)

The real policy under the guise of securing the border creates a low-cost labor pool. A Mexican job applicant’s resume might list “ability to walk on water” and “get passed over”. Dark skin fits Trump’s murderer, rapist and terrorist profile. Who would hire a murderer, rapist or terrorist? No one, almost. Low wage, no benefit employers love nothing more than a low-cost labor pool created from all those “passed over” job applicants.