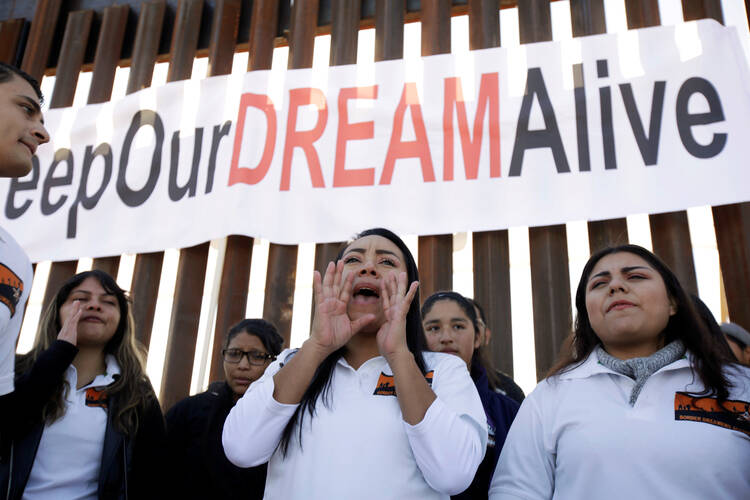 Beneficiaries of the federal Deferred Action for Childhood Arrivals program attend the "Keep Our Dream Alive" binational meeting in 2017. The Dreamers, as DACA recipients are known, gathered at a section of the U.S.-Mexico border wall in Sunland Park, N.M. (CNS photo/Jose Luis Gonzalez, Reuters)

If “Dreamers” lose their permission to work and face deportation, it would “lead to a humanitarian crisis,” said Los Angeles Archbishop José H. Gomez, vice president of the U.S. Conference of Catholic Bishops.

In his weekly column, Archbishop Gomez said the debate about Dreamers, the 800,000 undocumented immigrants who came to the United States as minors, demonstrates “how broken our system is and how unhealthy and unproductive our political discourse has become.”

Of the proposed measures, the U.S. bishops have been most supportive of the Dream Act, which has the broadest protection and a path to citizenship. On Jan. 10, however, House Republicans introduced a hardline bill that packaged legal status for Dreamers with border security measures, including funding for a border wall. The bill would also end diversity visas and family-based immigration initiatives.

“Everybody seems to realize that it would be cruel to punish them for the wrongs of their parents, deporting them to countries of origin that they have never seen, where they may not even know the language,” he said. “And yet here we are. It is eight weeks until the deadline and these young people find themselves stuck in the middle of a much broader debate about border walls, national security and the inner workings of our visa system.”

U.S. bishops have been most supportive of the Dream Act, which has the broadest protection and a path to citizenship.

A reform of the entire immigration system should not be tied to DACA, he wrote. “These young people have done nothing wrong. And their futures hang in the balance of these debates.”

The debate about Dreamers has escalated in the courts and in Washington this week. United States District Judge William Alsup temporarily blocked the Trump administration from ending Deferred Action for Childhood Arrivals, which was enacted by President Obama to protect Dreamers from deportation.

The Jan. 9 ruling would allow current DACA recipients to renew their enrollments, including those who missed an Oct. 5 deadline. The ruling, however, does not require new DACA applications to be accepted.

“It is going to help some people out, but it’s not a permanent solution,” said Javier Hernández-Kisste, 27, a Los Angeles video effects producer and a Dreamer, in an interview with America. “For the majority of Dreamers, we don’t want the law that helps us to put others at a disadvantage. It can’t be a way for the government to deport people or be so rigid that it oppresses communities.”

While Mr. Hernández-Kisste’s DACA status will expire in 2019, his parents, who are undocumented, are a great concern to him. The family immigrated to Los Angeles from Mexico City nearly 20 years ago. Mr. Hernández-Kisste studied at U.C. Irvine and said DACA helped him both in his education and in his career.

“As a nation, we have a moral and humanitarian obligation to Dreamers,” Bishop Vásquez said.

In September, Attorney General Jeff Sessions said the program would end on March 5, arguing that Mr. Obama had overstepped his executive power in implementing DACA. Judge Alsup, ruling on requests from California and other states, blocked the termination of DACA, arguing that Mr. Sessions based his decision on “a flawed legal premise.”

It is unclear how the ruling will impact on-going debate about Dreamers, a discourse driven by an impending March 5 deadline. Hours before the ruling, President Trump seemed to endorse protection for DACA recipients and comprehensive immigration reform in a televised bipartisan meeting at the White House with congressional leaders. Mr. Trump also stressed the need for border security as part of any immigration legislation.

Bishop Joe Vásquez of Austin, Tex., chairman of the U.S. bishops’ committee on migration, was encouraged by the “consensus that emerged” from the meeting. The church acknowledges the “right of sovereign nations to control their borders” and the need to ensure “the security of our nation,” the bishop said in a statement. But he cautioned against adding controversial elements to legislation that benefits Dreamers.

“For the majority of Dreamers, we don’t want the law that helps us to put others at a disadvantage.”

As a nation, we have a moral and humanitarian obligation to Dreamers,” Bishop Vásquez said. “These young people have steadfastly worked to improve themselves and our country and attempted in good faith to comply with the law as it stood. Their futures hang in the balance.”

Isaac Cuevas, associate director of immigration affairs for the Archdiocese of Los Angeles, said the archdiocese has organized informational sessions for DACA recipients at parishes in Southern California.

“Immigration is taking a more predominate place in politics right now, so hopefully that means Congress will be motivated to get something done,” Mr. Cuevas said in an interview with America, adding that the Trump administration would likely appeal the judge’s ruling. The uncertainty “is playing ping-pong” with the lives of Dreamers.

Mr. Reyna said Dreamers had “put their life on hold” after the announcement from the Trump administration in September. In October, a Marist Poll found that 83 percent of Americans—and 74 percent of Republicans—believed Dreamers should be allowed to remain in the United States. Of those polled, 58 percent favored a path to citizenship.

Angelica Salas, executive director of the Coalition for Humane Immigrant Rights in Los Angeles, said DACA had a positive impact on the community. California is home to more Dreamers than any other state.“We saw lives changed. We saw young people be able to pursue their dreams, complete their education and become productive members of our community,” she said. “Now, we have a lot of young high schoolers who do not have DACA status, who don’t know if they can go on to college.”