Is there another way to address the migration crisis? 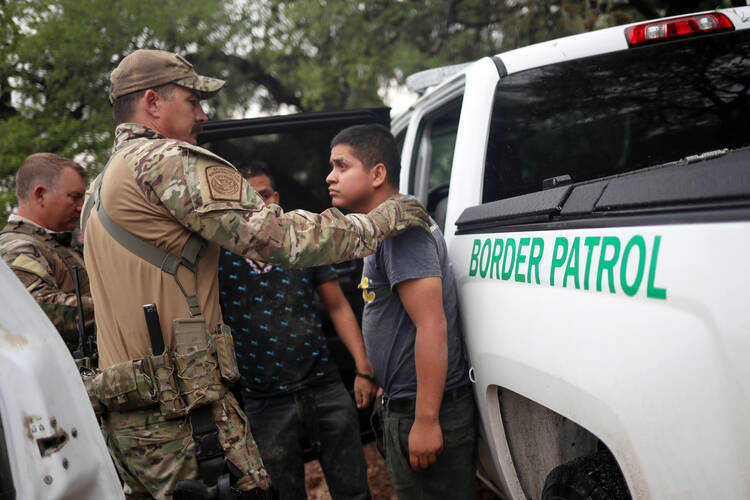 Members of the U.S. Border Patrol apprehend an immigrant from Guatemala on June 19 near Falfurrias, Texas. (CNS photo/Adrees Latif, Reuters)

The world is witnessing one of the largest humanitarian crises in history, with an estimated 68.5 million people forced to flee their homes. Some are escaping religious, ethnic or political persecution. Others are fleeing war and gang violence. Some are running away from crushing poverty. Others are leaving droughts and famines brought by climate change. While the reasons for migration are different, there is a universal desire for a better life.

The plight and flight of the poorest and most persecuted raises many questions. Do we send them back to their places of origin, where they could be killed, or do we accept them with compassion and understanding? In seeking solutions, do we focus on the displaced or on the forces that displaced them?

In seeking solutions, do we focus on the displaced or the forces that displaced them?

The United States and Mexico are addressing these questions as migrants flee poverty and gang violence in Central America—with Mexico as a transit country and the United States as the intended destination (though an increasing number are remaining in Mexico). In 2016, 200,000 Central Americans, mainly from Guatemala, Honduras and El Salvador, were apprehended by the U.S. Border Patrol.

This phenomenon led the Trump administration to pursue a policy of separating migrant families on the U.S.-Mexico border as a form of deterrence against unauthorized crossings. While the separations are new, the question of what to do about families is not. In 2014, the arrival of 69,000 unaccompanied minors from Central America became a national story, but more than 60,000 families were apprehended at the border, too. Most were granted entry into the United States to face deportation and asylum proceedings.

That changed this year with the “zero tolerance” immigration policy resulting in the separation of 3,000 children from their parents. The images of young children held in detention centers outraged millions of people around the world, forcing the Trump administration to retract its policy.

Perhaps it is time for a change in strategy.

The United States spends billions each year to remove undocumented migrants, but what if they did not have to flee their homes in the first place? What if the success of an immigration policy were measured in prosperity and security rather than in deportations and detentions? What if the solution lies not in border protection and immigration enforcement but in thoughtful diplomacy and strategic planning?

What if the success of an immigration policy were measured in prosperity and security rather than in deportations and detentions?

Shortly after the immigration crisis of 2014, the Obama administration worked with Congress and foreign diplomats, including those from Mexico, to create the Alliance for Prosperity, a bipartisan, multiyear plan promoting institutional reforms and economic development in Central America. In 2015, Congress approved $750 million in aid to Guatemala, Honduras and El Salvador toward those ends. It was not a panacea, but it was a start in rethinking the way that we address migration.

Unfortunately, this way of approaching migration has lost favor. U.S. foreign aid to Central America has decreased by 20 percent under the Trump administration. The militarization of the border and the dehumanization of those who cross also show a less understanding approach to the most vulnerable people in our hemisphere.

There is another way. The Global Compact for Safe, Orderly and Regular Migration, sponsored by the United Nations, is expected to be the first multinational negotiated agreement to address the challenges associated with migration, including its root causes and the potential for migration to further prosperity and sustainable development in our globalized world. Hearings on the plan have been held since April 2017, and in early July a consensus on the text was achieved at the U.N.’s General Assembly on the founding document of the Global Compact; it is expected to be adopted at a conference on international migration this December in Morocco. Its 23 objectives include “providing basic services for migrants” and using “detention only as a measure of last resort.” The United States had initially participated in the negotiations but withdrew last year.

In the same way that the causes of migration are many, the solutions are too. What works in one country may not work in others, but what will work is a comprehensive, holistic approach, like that of the Global Compact, that considers all parties and all factors. Migrants are incredible resources, and so are the communities from which they come. We must embrace them with kindness and compassion.

Pretending that their struggles are not our own will only lead to greater anguish and suffering. A successful policy cannot be measured in months or years but in decades. It is faster to act through deportations and detentions, but that does not make economic opportunity and security less worthy pursuits.

Mexico understands that migration is more than the journey; it is about cause and effect, and the Global Compact’s global approach will allow the international community to maximize migration’s economic opportunities. We are proud to recognize the humanity of migrants but more important, to work toward building a society where everyone has a fair shot at life. 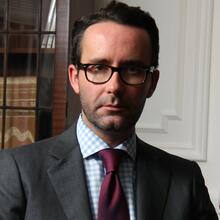 Diego Gómez Pickering served as Mexico’s ambassador to the United Kingdom from 2013 through 2016 and is now the Consul General of Mexico to New York City.

It is easy to understand that everyone wants a better life but how to achieve it? As things get better in the world there seems to be more discontent. Why? It is not possible to make everyone's life better by moving to a more prosperous place. The better solution in the long run is inculcating the ideas that create prosperity to the places in the world where they don't exist. The problem is it can not be done quickly but it must start before it can happen. The tragic irony is that do-gooders too often recommend policies that will not work and actually lead to more poverty not less.

The problem of our southern border security is geopolitical, as some are starting to realize. But even as that realization starts to gain recognition, it is rarely talked about with the comprehensiveness that reveals the crucial parts of the problem to be solved. For example, take the following sentence in the article:

“What if the solution lies not in border protection and immigration enforcement but in thoughtful diplomacy and strategic planning?”

Both thoughtful diplomacy and strategic planning are means toward an end. What is the end? Not merely forceful prevention of excessive numbers of refugees from poverty, or from the numerous sources of life-threatening violence (government criminals, non-government criminals), or from denial of basic rights and freedoms. What are the conditions that would reduce the motivation to emigrate either lawfully or unlawfully?

If, as the result of in depth study and analysis, conditions in the home countries of the refugees that would accomplish this reduction can be articulated by informed imagination, then you have a start on formulating a policy objective. Developing a strategy without a policy objective is a form of irrational behavior. And thoughtful diplomacy is merely one of the many means available to implement a strategy that is aimed at achieving the objective.

To articulate policy objectives that would be tailored to each of the source countries identified as contributing to the southern border problem, it would be necessary to identify the constituent parts or principal motivating factors that are to be reduced as influencing the desperate urge to emigrate, while at the same time identifying the feasible acts that the U.S. would have to complete in order to bring the desired end-state into existence.

As is true of all human endeavors, both the morality of the desired end-state and of the means or strategies used to achieve it would have to be evaluated.

Helping nations to achieve more safety and stability for their populations is an excellent goal that the USA should pursue. Unfortunately, we have an incompetent criminal in our White House, so not much is likely to be done in that regard until he and his supporters are tossed out of office. I am glad to see Mr. Pickering's ideas presented, though.

I believe that we should both focus on displaced people and those responsible for their displacement. Years ago,, I worked at a group home caring for disabled men with several immigrants from Liberia. It was harrowing to hear them relate the violence they experienced from their nation's civil war. I understood their desire to flee to a better way of life, and of other immigrants that I knew from Liberia, most were good, hardworking people. In impoverished nations, our nation and other developed nations should encourage trade both between "priveleged" nations and the international community. Humanitarian assistance for those fleeing droughts and famines should be provided. I believe that Catholic Relief Services has projects which help result in better farming practices. Earlier this month, as I do occasionally, I made a modest contribution to an environmental group, the Catholic Climate Covenant, which works to resolve the serious matter of climate change while respecting Church teachings regarding abortion and natural family planning. I agree that migrants are "incredible resources," and many work hard in jobs that many Americans choose not to do, and contribute to our economy. Finally, I agree with Mr. Gomez Pickering that resolving the difficulties in addressing the matter of migration will take decades. Although our nation has many people in need, I believe that we should be humane and welcome migrants (after vetting to insure that they're not terrorists) and provide them both with opportunities to be employed in decent jobs (fortunately, unemployment is low) as well as provide basic services. As a retired Special Education teacher, I believe that education both in academics and civics (both rights and responsibilities) is important for migrants both to find decent jobs to support themselves and their families, and become integrated into our nation.

Without fail, whenever I read one of these stories I am left to wonder, what we, the living Church, can do to strengthen the civic and legal institutions in the countries so afflicted.
Would remind all that once a society stops respecting individual property rights, they immediately, always and ever, stop respecting personal rights and dignity.

My second two cents -- why is America Magazine silent on the full blown humanitarian crisis, emigration crisis originating in Venezuela. VZ has lost a full 7% of its population in the past couple years. Now its surrounding neighbors are refusing admission, flooded as they are by emigre's from their neighbor.

I think that the Jesuits and "official church" care more about their land-holdings, properties, church buildings and universities than defense of the rights of the individual.