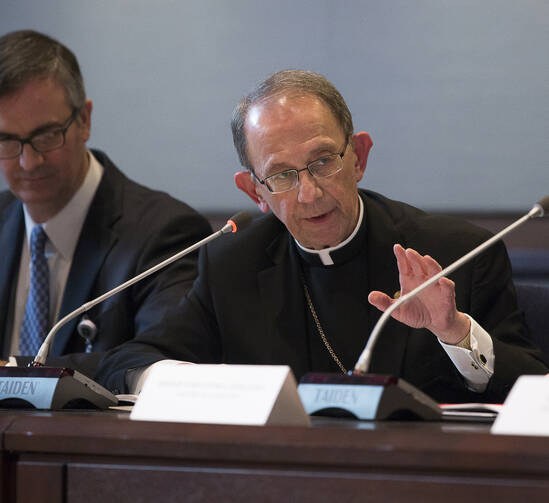 Bishop Lawrence T. Persico of Erie, Pa., speaks during a meeting in late January at the headquarters of U.S. Conference of Catholic Bishops in Washington. (CNS photo/Tyler Orsburn)

HARRISBURG, Pa. (AP) — A damning report into allegations of decades of child sexual abuse at the hands of clergy members and efforts to cover it up in six of Pennsylvania's Roman Catholic dioceses is expected to be released in the coming days.

The public disclosure of the findings, the result of an almost two-year grand jury investigation, has been delayed while some of the people named in the report have launched legal challenges, arguing the report is inaccurate and releasing it in its current form would violate their constitutional rights to their reputations and to due process of law.

The state Supreme Court has agreed to consider those claims and scheduled the matter for oral argument in September. In the meantime, the court has ordered identifying information regarding those challenges to be redacted and the nearly 900-page report to be released.

The justices last week appointed a senior jurist, McKean County Judge John Cleland, to serve as a special master who will sort out disputes over what must be blacked out.

The court said if the challengers didn't object to redactions made by the attorney general's office, the report would be released by last Wednesday.

The court said if the challengers didn't object to redactions made by the attorney general's office, the report would be released by last Wednesday. That date came and went without the report's release, suggesting there is a behind-the-scenes conflict pending before Cleland.

The court directed Cleland to resolve any redaction disputes and then release the report by 2 p.m. on Tuesday. The justices also warned the lawyers against "provoking or instigating unnecessary ancillary litigation" over producing the redacted version of the report.

What’s in the report

Some details about what's in the report have been made public, including the disclosure by the state Supreme Court that it will identify more than 300 "predator priests."

In June, Cambria County Judge Norman Krumenacker, who supervised the grand jury, said the findings involved allegations of child sexual abuse, failure to report it, endangering the welfare of children and obstruction of justice by people "associated with the Roman Catholic Church, local public officials and community leaders."

The grand jury focused on allegations going back decades in the Allentown, Erie, Greensburg, Harrisburg, Pittsburgh and Scranton dioceses. Previous reports addressed child molestation by priests in the Philadelphia and Altoona-Johnstown dioceses.

Some details about what's in the report have been made public, including that it will identify more than 300 “predator priests.”

The bishop of Pittsburgh told parishioners the report was "a sad and tragic description of events that occurred within the church" and noted almost all reports of abuse in his diocese occurred before 1990.

A retired Erie bishop withdrew his objection to the report's release after prosecutors agreed some of its broad claims were not directed at him. A court filing in that matter said the report concluded that victims were "brushed aside, in every part of the state, by church leaders who preferred to protect the abusers and their institutions above all."

The report found that "diocesan administrators, including the bishops, often dissuaded victims from reporting abuse to police, pressured law enforcement to terminate or avoid an investigation, or conducted their own deficient, biased investigation without reporting crimes against children to the proper authorities."

In a July 27 order, Chief Justice Thomas Saylor said the grand jury worked to expose child sexual abuse "and concealment of such abuse on an extraordinarily large scale."

Saylor said that ideally the people named in the report as having committed criminal or morally reprehensible conduct would have been given an adequate chance to appear before the grand jury and provide their responses. He said those who didn't get that chance are entitled "to this court's further consideration of whether additional process can and should now be provided as a curative measure." That will be the topic of a September argument session before the high court in Philadelphia.

Amid the legal back and forth, Attorney General Josh Shapiro recently wrote to Pope Francis, asking him to pressure the state's Catholic leaders to withdraw any objections to releasing the report. A lawyer for some of the petitioners complained that prosecutors were reaching out to the pope to try to get their way.

The Harrisburg bishop recently announced his diocese concluded church leaders failed to protect children by not adequately responding to all the allegations of sexual misconduct over the years and would remove the names of all bishops from buildings and other facilities.

Two priests have been charged criminally as a result of the grand jury investigation, but the state's statute of limitations for child sexual abuse is a barrier that could prevent additional charges, particularly considering that many allegations go back decades.