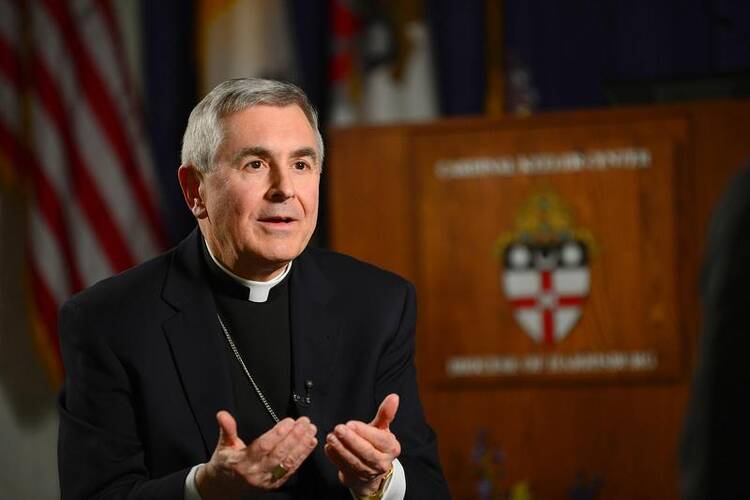 In a gesture meant to acknowledge the mishandling of sexual abuse against minors, buildings and rooms in the Diocese of Harrisburg honoring bishops dating back to 1947 will be stripped of their names, Bishop Ronald Gainer announced during a press conference at the diocese’s headquarters on Wednesday morning.

“The decision to remove names of bishops and clerics may prove to be controversial, but as bishops, I strongly believe that leaders of the diocese must hold themselves to a higher standard and must yield honorary symbols in the interest of healing,” Bishop Gainer said.

“The leadership of the church did not in every case take adequate measures while handling matters related to offending clerics,” he said. Bishop Gainer also released a list of every member of the clergy who has been accused of sexual abuse against children dating back to 1947.

In addition, “anyone accused of sexual misconduct will have his name removed from any place of honor,” the bishop said.

Bishop Gainer also announced that he was waiving confidentiality agreements in settlements between the diocese and survivors of child sexual abuse. He said that the agreements had not been enforced “for some time,” but he had heard some people still did not feel free to talk about their experiences.

“The leadership of the church did not in every case take adequate measures while handling matters related to offending clerics,” Bishop Gainer said.

“I take this step about confidentiality so that the survivors can feel free to tell their stories to whomever and whenever they wish,” the bishop said.

The release of the list of priests, deacons, seminarians and members of religious communities with connections to the diocese accused of sexual misconduct against minors comes as Pennsylvania awaits the release of a grand jury report detailing abuse allegations in a number of dioceses.

The grand jury report—the result of an almost two-year investigation into six of the state’s eight dioceses—is due to be released no later than Aug. 14 following a ruling from the state’s Supreme Court. Lawyers arguing on behalf of those named in the report had argued releasing it would damage their reputations and violate their constitutional rights. But justices ruled that the 900-page report must be released. They said the 300 names contained in the report must be redacted until legal challenges posed by some of the people named in the report have been decided.

Earlier this year, the Diocese of Erie released its own list of clergy who had been accused of sexual abuse against minors.

In 2016, the Survivors Network for Those Abused by Priests accused Bishop Gainer and the Diocese of Harrisburg of “putting kids in harm’s way by continuing to hide the names and whereabouts of predator priests.”

During the press conference, the bishop said that the Diocese of Harrisburg had been compiling its own list since his arrival in 2014 and that he planned to release it sooner. But the state’s attorney general, he said, asked the diocese to wait while the grand jury report’s fate was decided.

The list from Harrisburg contains allegations against 71 members of the clergy. It does not, a lawyer for the diocese said during the press conference, imply that every person on the list is guilty. Many of the accusations come from the 1970s and 1980s, the lawyer said.

“In my own name and in the name of the Diocesan Church of Harrisburg, I express profound sorrow and apologize to the survivors of child sex abuse, the Catholic faithful and the general public for the abuses that took place and for those church officials who failed to protect children,” Bishop Gainer said.

You should add that the SAG noted that the diocese obfuscated the process for a very long time. Bishop Gainer's actions can be viewed as "crisis management."

The “crisis management” to which Mr. Killoran refers should be less to do with the revelations that have been forthcoming and will be reported by the civil authorities than the damages inflicted upon the Church by the lack of any serous discussion of the issues from our pulpits. I don’t know about any other readers here but I have yet to have heard from parish priests any discussion whatsoever of the scandals that have been so public.

Given the psychological, moral, and emotional implications of these revelations upon parishioners, I would think that Bishops would ask parish priests to develop homilies that give some perspectives to people about the Church, its leaders, clergy and religious, and their sinfulness. We have had 100 years at least of a clericalism that has given them carte blanche of untouchability in their attitudes and behaviors, no such carte blanche afforded to the faithful, in our schools or confessionals or churches.

Just recently I had a conversation with the partner of someone who had learning difficulties as a child, now a successful businessman. She referred to her partner as an “atheist”, the result she said of his reaction to the actions of Catholic school nuns when he was a schoolchild. As trite and as immature as that sounds, clergy and religious occupied such authority and invincibility in the past that the “crisis” is really in our pews and we are only bound to lose more if the clergy in our pulpits don’t talk to the people in the pews.

Too late, Buddy. All the stupid, worthless, meaningless ceremonies you’ve performed... Don’t even bother. Only Survivors should be heard. Sit down and shut up. All of you