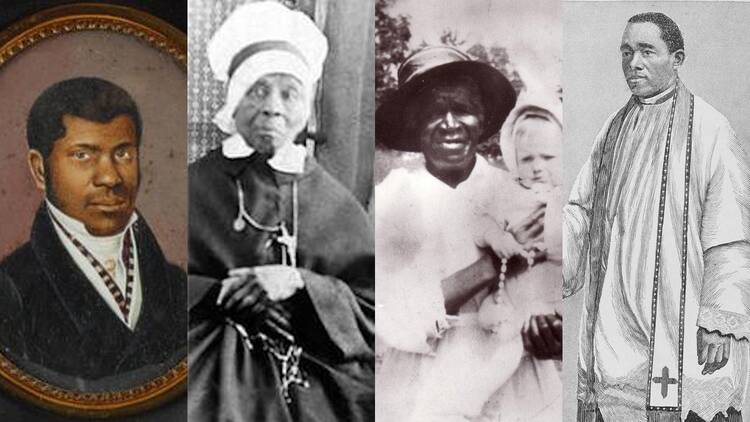 Pierre Toussaint, from left, Mary Elizabeth Lange, Julia Greeley and Augustus Tolton are some of the African-American candidates being supported for sainthood. (Photos via Creative Commons; Greeley courtesy of Archdiocese of Denver; Religion News Service)

(RNS) — The founders of two religious orders and an African-American priest who had to train in Rome because no U.S. seminary would accept him are among five candidates being supported for sainthood by a new coalition of black Catholic organizations.

The initiative was announced Tuesday (July 31) at Xavier University in New Orleans, where a new resource center will be established to facilitate research on these candidates and other black Catholics.

This week #BlackLivesMatter turned 5. Catholics must continue to embrace its mission.
Olga Segura

The messy business of becoming a saint
Daniel P. Horan

Scholarly research is important “for the larger church, understanding the role of African-Americans in building the church,” said Xavier President Reynold Verret. Documentation of a person’s life, including expressions of virtue and performance of miracles, is generally required for progress on the path to sainthood.

The five candidates all are in the early stages of the journey to sainthood, which in the Roman Catholic Church is a four-stage process. Lange, Tolton and Greeley have attained the first level, in which a diocesan tribunal affirms that they lived lives of “heroic virtue.”

Although the Catholic Church has many saints of African descent, it has no black American saints.

Delille and Toussaint have attained the second level, veneration, meaning they have been proclaimed heroic in virtue by the Congregation for the Causes of Saints with the approval of the pope. The next level, beatification, generally requires documentation of one miracle (except in the case of a martyr). Canonization, the fourth level, requires two miracles.

The process can take decades or even centuries. Verret said advocacy for Toussaint was under way in the 1970s.

Some credit Toussaint with inspiring the creation of Catholic Charities, one of the largest charitable organizations in the United States. After being freed from slavery, he financially supported his former slave master’s widow through his work as a hairdresser for the rich and famous in New York City, including the family of Alexander Hamilton. Through Toussaint’s connections, he helped create several organizations serving the destitute of the city without regard to race.