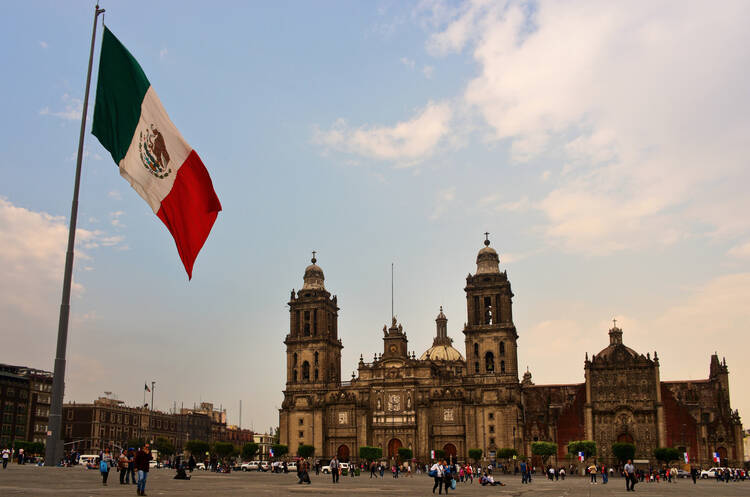 The Mexican Flag flies on the Zocalo near the Metropolitan Cathedral in Mexico City.

The 105th annual conference of the Mexican Episcopal Conference, being held this week just outside Mexico City, will be an unusual one. The approximately 150 bishops and 20 priests who plan to participate will entertain four candidates who will be competing for the presidency this summer.

On March 30, Mexico officially kicked off the campaign for the July 1 general elections. The country will elect a new president, a new Congress and hundreds of other elected officials. The stakes are high. Mexico’s political commentators predict this election may be the most consequential since multiparty democracy was restored in 2000, when the Party of the Institutional Revolution (P.R.I.) was removed from power after seven decades of authoritarian rule. Now greater change hangs in the air as the P.R.I., again in power, and its President Enrique Peña Nieto struggle in the polls, plagued by corruption scandals, spiking criminal violence and a sluggish economy.

As consequential as the next Mexican election may be, the Catholic Church in Mexico has largely remained on the sidelines so far.

Riding a popular wave is former Mexico City mayor and leftist firebrand Andrés Manuel López Obrador of the Movement for National Regeneration (known as Morena), whose third bid for the presidency, as America has reported, may finally end in victory this time. Independent candidate Margarita Zavala, the wife of former president Felipe Calderón, trails as a distant fourth.

As consequential as the election may be, the Catholic Church in Mexico has largely remained on the sidelines so far. In a country with a traumatic history of anticlerical strife and stringent separation between church and state, church leaders have traditionally refrained from publicly endorsing a candidate or party.

But even behind the scenes, neither the Mexican Episcopal Conference (C.E.M. is the Spanish abbreviation) nor church leaders representing individual dioceses appear willing to throw their weight behind any presidential hopefuls this election cycle. Observers say this is mostly because none of the candidates are particularly attractive to the church, and the issues most important to it have not been prominent in the rhetoric of the campaign.

During his inaugural Mass as archbishop of Mexico City in February, Carlos Aguiar Retes emphasized the importance of religious freedom and eliminating the restrictions the Mexican constitution places on the church and the clergy, such as prohibiting priests to become public officials. None of the presidential candidates seek to alter those restrictions in their electoral platforms.

“The Catholic Church is very silent in comparison to previous elections, mostly because they don’t really have a candidate they can get fully behind,” Luis Guillermo Hernández, a journalist and longtime observer of the church, told America. “In 2006 and 2012 there was implicit and sometimes explicit support first for Felipe Calderón and then Enrique Peña Nieto. We don’t see the same degree of support for any of the four candidates this time.” Mr. Calderón and Mr. Peña Nieto both won their respective elections.

“The Catholic Church is very silent in comparison to previous elections, mostly because they don’t really have a candidate they can get fully behind.”

The C.E.M.’s most explicit pronunciation about the election so far was a statement on March 19 that focused solely on the need for citizens to participate and be active. Without mentioning a party or candidate by name, it called for voters to maintain an optimistic attitude and vote for the “possible good” instead of the “lesser evil.”

“The C.E.M.’s statement is well in line with Catholic doctrine,” Jorge Eugenio Traslosheros Hernández, a historian and scholar at the National Autonomous University of Mexico, said. “It’s the idea that we can’t be good Catholics if we’re not virtuous citizens. It basically says that you can’t call yourself a Catholic, if you don’t participate.”

Although Mr. Anaya’s National Action Party, which formed a coalition with the more liberal Party of the Democratic Revolution (P.R.D.) and Citizen Movement, traditionally has strong ties with Catholic clergy, he personally has not cultivated a strong relationship with the most prominent members of the Mexican church hierarchy. At 39, Mr. Anaya is the youngest of the four candidates.

Mr. Meade, the P.R.I. candidate, and his party have likewise not drawn support from church leaders. “The church is very angry about the failure of the state to provide security for the clergy under the current administration,” Mr. Hernández told America. “It’s something that Meade can’t escape.” At least 21 priests have been murdered during Mr. Peña Nieto’s presidency, four more than under his predecessor.

The frontrunner, Mr. López Obrador, meanwhile has his own issues. Running on a platform of anti-corruption and anti-drug-war populism, wealth redistribution through social programs, and fierce nationalism, the man popularly known by his acronym AMLO has a program that, at first glance, would seem attractive to the church. He is also noticeably conservative on social issues and, during his term as Mexico City mayor (2000-2006), cultivated a close friendship with former archbishop Norberto Rivera. Besides its traditional ally the Labor Party, Mr. López Obrador’s Morena party has even formed a coalition with the Social Encounter Party, a deeply conservative evangelical Christian group.

“We never had a conflict with him when he was mayor, it was a magnificent relationship,” Hugo Valdemar, a former spokesperson for the Mexico City archdiocese, said. “We also know that he shares many of our values.”

Even so, the archdiocese’s weekly publication Desde la Fe, then still directed by Mr. Valdemar himself, in January explicitly called for church members to not vote for the left. This is not because of Mr. López Obrador himself, Mr. Valdemar explains, but because of the more liberal wing of Morena. Among the principal campaigners of the party is Marcelo Ebrard, Mr. López Obrador’s successor as Mexico City mayor, whose support of the legalization of same-sex marriage and abortion led to open confrontation with the archdiocese.

“None of the candidates will embody what the church is hoping for,” said Mr. Traslosheros Hernández of the National Autonomous University. “This explains why the C.E.M. asks Catholic voters to look for the ‘possible good’ within the current context.”

That means looking for a candidate closest to the issues that matter, such as an end to violence and corruption, said Mr. Valdemar. “What really worries voters is the out-of-control violence, which the government itself has been compelled to acknowledge. And there’s the rampant corruption in the country. Society is really fed up.”

A timely and informative report.