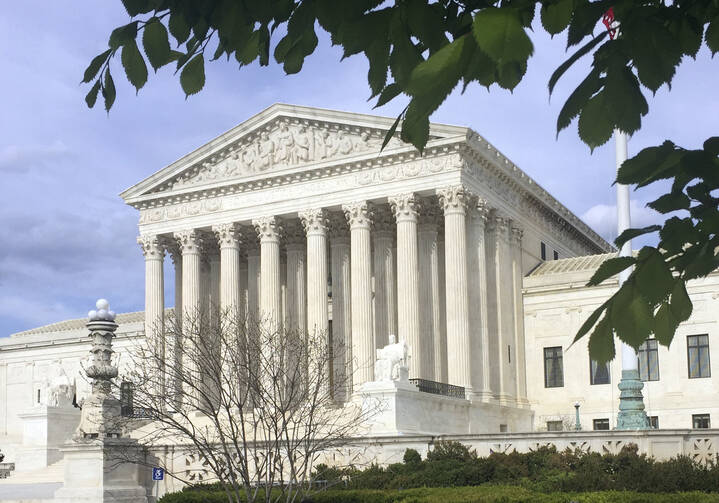 The Supreme Court is siding with the Trump administration over the American Civil Liberties Union in the case of a pregnant immigrant teen who was able to obtain an abortion after filing a lawsuit. (AP Photo/Jessica Gresko)

The Supreme Court is rejecting a suggestion by the Trump administration that lawyers for the American Civil Liberties Union might deserve to be sanctioned in the case of a pregnant immigrant teen it helped obtain an abortion.

There’s nothing to celebrate about a detained migrant being granted access to an abortion.
The Editors

Government lawyers had complained that ACLU lawyers didn't alert them that the teen's abortion would take place earlier than expected and told the court that it might want to issue an order "to show cause why disciplinary action should not be taken" against ACLU lawyers. The administration said that deprived its lawyers of the chance to ask the Supreme Court to block the procedure, at least temporarily. The ACLU said its lawyers did nothing wrong.

The Supreme Court declined to wade into the finger-pointing between the sides.

"Especially in fast-paced, emergency proceedings like those at issue here, it is critical that lawyers and courts alike be able to rely on one another's representations. On the other hand, lawyers also have ethical obligations to their clients and not all communications breakdowns constitute misconduct," the justices wrote in an unsigned opinion, adding that the court "need not delve into the factual disputes raised by the parties" in order to vacate the decision for the teen.

The teen at the center of the case entered the U.S. illegally in September as a 17-year-old and was taken to a federally funded shelter in Texas for minors who enter the country without their parents. The unnamed teen, referred to as Jane Doe, learned while in custody that she was pregnant and sought an abortion. A state court gave her permission, but federal officials — citing a policy of refusing to facilitate abortions for pregnant minors in its shelters — refused to transport her or temporarily release her so that others could take her for the procedure.

The ACLU helped the teen sue the Trump administration, and after a federal appeals court sided with her, the government was preparing to ask the Supreme Court to step in and block the procedure, at least temporarily.

But the teen, allowed out of the shelter by court order, had an abortion first, about 12 hours after a court gave her the go-ahead. In response, the Trump administration, in a highly unusual filing with the Supreme Court, cried foul. The ACLU has defended its attorneys actions, saying government lawyers made assumptions about the timing of the teen's abortion and argued that the decision should stand.

Even though Jane Doe was able to get an abortion, the lawsuit that began with her has continued and could return to the Supreme Court at a later date. Scott Lloyd, the director of the Department of Health and Human Services' Office of Refugee Resettlement, which oversees shelters for unaccompanied immigrant minors, has said he believes teens in his agency's care have no constitutional right to abortion.

There’s nothing to celebrate about a detained migrant being granted access to an abortion.
The Editors

And since the Jane Doe case was filed, several other pregnant teens in his agency's care have come forward seeking abortions and been represented by the ACLU. In two cases, the young women were released from custody and able to seek the procedure on their own while in another case the teen, a 17-year-old rape victim, got a court order allowing her to obtain an abortion and the government stopped attempting to block the procedure.

In March, following a request from the ACLU, a judge barred the Trump administration from interfering with the ability of any pregnant immigrant teens in its custody to obtain abortions while a class action lawsuit against the administration goes forward.

U.S. District Judge Tanya Chutkan ordered the Trump administration to post notices in government-run shelters that tell pregnant women that they have a right to decide whether to have the baby or to end their pregnancy. The notice gives teens a person to call if they are having difficulty getting an abortion or if they are being pressured not to have an abortion. Chutkan, who was appointed by President Barack Obama, is also requiring minors in shelters to be given the notice in English and Spanish and that the information be included in an orientation for minors entering the shelters. The government is appealing.

Who is the article siding with? Feels like the ACLU and the person seeking the abortion.

The headline to this article is most unfortunate. The Court did not “side with the Trump admin.” in this case, save for taking the uncontroversial step of vacating the lower court’s judgment due to the mootness of the appeal. This a step that is taken routinely, and casts no reflection on the lower court’s ruling. A headline that respected accuracy and truth would have said something like: Supreme Court Dismisses Trump Admin’s Appeal as Moot; Vacates Decision of the Lower Courts.”

To allow the abortion would encourage immigrants to come here from where it is not allowed, as a means to get an abortion. Therefor, an abortion outlet. A means to kill a future human with impunity.

Since you can have an abortion in the countries which border the US, where are all these immigrants who are coming here looking for an "abortion outlet" coming from? (And why would you come to the US with its restrictive laws?)

Why an article shilling for the AP editorial perspective, and no Catholic commentary on the moral and social policy issues at stake in the case?

Allowing a rape victim to get an abortion is only human decency. The Trump administration is led by an admitted sexual assailant, which makes its moral outrage about abortion for rape victims highly suspect. No woman should be forced to give birth to the offspring of a rapist.