There’s nothing to celebrate about a detained migrant being granted access to an abortion. 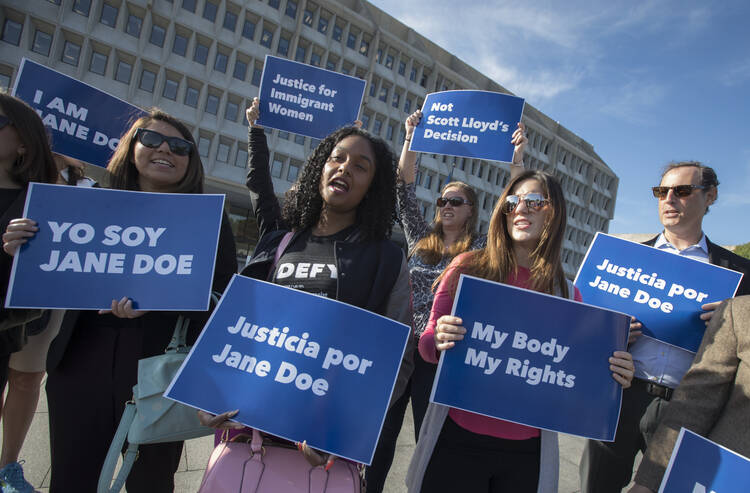 Activists with Planned Parenthood demonstrate in support of a pregnant 17-year-old being held in a Texas facility for unaccompanied immigrant children to obtain an abortion. (AP Photo/J. Scott Applewhite)

The A.C.L.U., NARAL and their supporters across Twitter were quick to enthusiastically cheer a “victory” for “Jane Doe,” a formerly pregnant teenager from Central America being held in an immigration detention facility in Brownsville, Tex. After a number of clashing court decisions, she had been ultimately allowed to terminate a 15-week pregnancy.

Jane Doe’s plight again demonstrates the emptiness of the argument for choice when young people face circumstances that seem overwhelming. It is hard to perceive much choice in a decision to have an abortion under detention in the United States or after deportation back to Central America, or when a dream to escape poverty and violence seems overturned by an unplanned pregnancy. Would Jane Doe have a different choice if she were able to count on those who rushed to help as she sought an abortion to just as enthusiastically support her in a choice for life?

It is hard to perceive much choice in a decision to have an abortion under detention in the United States or after deportation back to Central America.

The Trump administration rightly took steps, in this instance, unsuccessfully, to prevent the United States and government employees from becoming unwilling facilitators of abortion. It should continue to pursue that principle, despite the court outcome this time. But it should also consider how its economic and immigration policies contributed to the hopelessness of this Jane Doe.

Future Jane Does should have better choices, however they have come into the United States. Abortion does not now, and cannot in the future, offer any real justice or hope in the face of the challenges this young woman and others like her face. And the injustice of abortion itself requires us to work to protect children in the womb along with their mothers.

The socioeconomic realities that young people are escaping in Central America, the violence of gangs and the lack of economic opportunity, are indeed life-crushing. The dangers they face on the way to what they believe will be a better life in North America are grim. Many young women and girls are victims of sexual assault on this dangerous journey. But young people will continue to come north, however the debate over immigration proceeds in Washington. More merciful, comprehensively pro-life policies could protect them from unnecessary risks and heart-rending decisions along the way.

The injustice of abortion itself requires us to work to protect children in the womb along with their mothers.

It is a regular if specious condemnation of the people who compose the pro-life community that they are only concerned with life until birth. That cynical presupposition ignores the reality that the men and women of the pro-life movement are the same people who open their homes to couples facing unplanned pregnancies and who staff parish food pantries, housing and homeless outreach and a myriad of other social and humanitarian services conducted informally and institutionally by the church.

Now that U.S. pro-choice advocates have achieved this self-proclaimed victory in Texas, are they going to continue to advocate for Jane Doe beyond the flash point of her right to terminate a pregnancy? Or should they too be accused of being disinterested in life after abortion?

This Jane Doe remains in detention and faces many struggles ahead. The church, both pro-life and pro-immigrant, will be ready to assist her and any future Jane Does who may, in trembling and in hope, cross U.S. borders. Will it be afforded that opportunity? Will other Jane Does be allowed to seek its help?

The article makes mention of the conditions that made this girl's choice difficult, not least the increasingly brutal detention methods enjoined by US Immigration policy under this administration. However, it takes a gratuitous slam at the people and groups speaking out in support of the pregnant girl's right to an abortion, questioning whether these people would be as adamant if the girl wished to carry the baby to term.

How are the two situations similar? If she did not seek an abortion, she would be one of the hundreds of pregnant girls and women being detained: ignored and possibly endangered by harsh conditions imposed on detainees. What would it mean to protest for their right to remain pregnant when no one is stopping them from remaining pregnant?

I certainly am not cheering about this poor girl's abortion. I weep for the unborn child. I weep also for a system, which has a lot of support among church-going Christians, a system that makes abortion seem the only realistic choice to a voiceless and choiceless young woman.

Many good points here. Terrible example of how pro life and pro immigration are one and the same. No one can claim to be pro life and not weep for both. Where oh where are the leaders of this church? ‘Whatsoever you do to the unborn and immigrant you do to me....’

She is not a citizen so therefore, no constitutional rights. She is an illegal minor. She is in custody of the Federal Govt. Illegals are not simple let go to roam the country. The Fed Govt. is now her custodian. She should be sent back to her own country. There is no difference to her not having an illegal abortion there or not having one here. If an illegal specie was captured and in custody, it would not be set loose in our country or look for a sponsor. Since it can't be killed, it can be sent back to its own country. Same here, send her back to her own jurisdiction. Then it would be their problem not ours.

Ellen B
5 years 1 month ago

That's just not true. Non-citizens also have rights in this country. That is what the court affirmed & that is what should be celebrated.

Very interesting article and comments. After an already longer than average life and marriage, and with a larger than average family, we have experienced a variety of life stories reflective of at least some of the stories told in both the article and comments. But we have been able to draw few broad conclusions from our observations and experiences. We try to give advice, suggestions, encouragement and tangible assistance as well of course as prayers. We are confident that our prayers are being answered in forms that we don’t always recognize, and occasionally in forms that we do. http://www.unilexconsultants.com/start-a-business/register-nidhi-company/

As a gay Catholic, I have received forgiveness from my compassionate pastor for many years ago having had sex with men through the Sacrament of Reconciliation. It may be that being gay and childless, that my views are irrelevant. However, I have 3 nieces and a nephew whom I love and as youngsters enjoyed caring for them. I'm a 55 year retired Special Education teacher who worked with brain damaged students, some of whom had serious behavior disorders. It was challenging, but I did my best to care and educate them in life skills and decent behavior. For another 20 years I worked in different capacities with disabled adults. I am truly glad that none of my students or adults with whom I worked, several of whom are my friends, had their lives ended by the violence of abortion. Several of my co-workers in a group home with disabled men were immigrants who fled from Liberia due to a brutal civil war, seeking a better live in our nation. I agree that our laws should protect the unborn, and that those of us in the pro-life community must intensify our compassionate, practical assistance to protect women. In addition, hopefully our government under President Trump, despite what as a former long-time Democrat and moderate Republican see as his deficiencies in many of his policies, will fund care both for both pregnant women in difficult circumstances, as well as provide caring immigration policies. In Exodus (22: 20-26) God admonishes the Old Testament Jews, "You shall not molest or oppress an alien, for you were once aliens yourselves in the land of Egypt." Please, let's protect both the lives of vulnerable immigrant girls, women, and men, as well as the innocent unborn.

I struggled three days trying to write an adequate rejoinder to your editorial, with so much of which I disagree. There are so many issues to argue from a different social, economic, and political perspective. This morning I read an article in the NY Times, entitled “Ireland Wanted to Forget. But the Dead Don’t Always Stay Buried.” It crystallized for me the single issue that bothered me the most about your editorial.

You wrote the editorial using a single individual who already had become the icon for an ideological and cultural national debate that has been raging in the nation for many years now. We may not know her name but by exploiting her private story you added no nuance, no compassion, no sense of mercy to her personally. The NY Times told a story of Irish women and their offspring treated with the same disdain in years past by Catholic Church agents. Unlike most of what I read in “America,” with your choice of this situation for an editorial on abortion, I sensed the same disdain. I freely admit that I may be all wrong but that was my reaction.

a) Was anyone who offered to help the young women and her baby allowed to speak to her ?

b) How does a 17 year old manage to make it all the way to the American Border - can someone please explain how that is possible ?

c) What will happen to her now ?

“It is hard to perceive much choice in a decision to have an abortion under detention in the United States or after deportation back to Central America.”

Why that should be thought to be true I can’t imagine, however difficult the circumstances. The woman is carrying a life, however nascent, obviously deserving of love and protection, whatever the circumstances. Of course, talk is cheap, but that in no way alters that obvious truth. Whatever could’ve been should’ve been done in helping the mother deliver her child. Then our , of course, so often satanic, social engineering judiciary ‘ intervened.