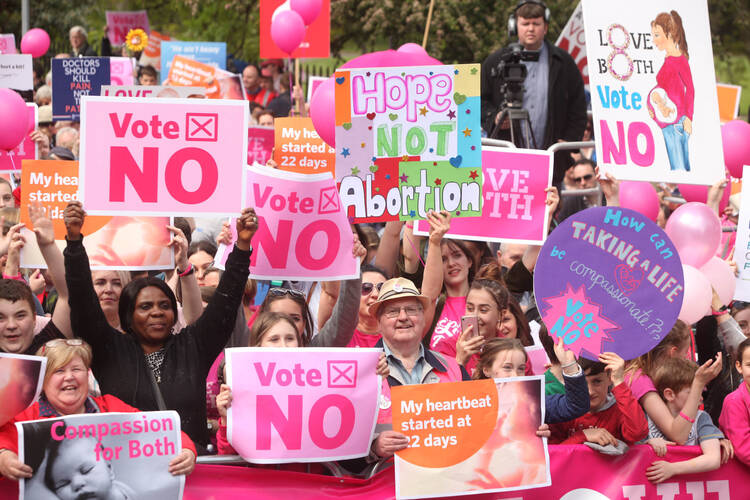 Update from Catholic News Service: With votes counted from 30 of Ireland's 40 constituencies, results from the nationwide referendum showed that 67.3 percent of citizens opted to remove the Eighth Amendment from the constitution, while 32.7 percent voted to retain it. Turnout was 64.5 percent. See more details here. If these numbers hold up, the victory will be of a larger magnitude than "yes" activists had believed possible. It would then fall to Parliament to establish new laws governing abortions.

With the vote on whether to repeal Ireland’s Eighth Amendment in full swing today, commentators have wondered if male voters will be turning out in significant numbers or if the referendum will be perceived as an issue for Irish women to decide. With Irish women tilting in favor of repealing the ban on abortion—47 percent to 35 percent, with 15 percent undecided, according to an April poll by the Sunday Independent—the fate of the Eighth Amendment may hinge on the turnout from men and a late change of heart from the Republic of Ireland’s undecided voters of both genders.

Added to the Irish Constitution by a referendum vote in 1983, the amendment requires authorities to equally protect the right to life of a mother and of her unborn child, effectively banning abortion in Ireland except in cases when the woman’s life is at risk.

A notably muted voice during the debate leading up to the referendum has been that of the Catholic Church in Ireland. Perhaps still smarting over the success of a referendum to approve same-sex marriage in 2015 by an almost 2 to 1 margin and with its moral authority weakened by years of revelations about the sexual abuse of children by its clergy, the Irish church, many say, has taken a low-profile role on the vote.

“I think the church has decided to take something of a back seat because they feel it’s better left to the laity,” said Mary Kenny, an Irish journalist and a founding member of the Irish Women’s Liberation Movement, as well as author of Goodbye to Catholic Ireland.

“The church has stated its position on human life, but it’s right that it should maintain a certain detachment from legislation.”

“And I basically agree with that,” she said, commenting on the historic vote via email. “Priests and bishops get verbal abuse by being told, ‘How can you speak for women? You don’t know what it’s like!’

“But when there are intelligent, articulate and attractive young women—who are also mothers, as it happens, like Maria Steen [a prominent anti-abortion campaigner]—making the case, nobody can level that criticism.

“There are some terrific young women in the pro-life movement, and it’s good to see their visibility,” she added. “The church has stated its position on human life, but it’s right that it should maintain a certain detachment from legislation…. Even so, some of the foreign coverage of the referendum has fallen back on the same dreary old clichés about ‘old Catholic Ireland’ versus ‘new, liberal, modern Ireland.’

“Few reporters have picked on the nuances and subtleties. For example, there is a lobby on my Twitter feed, [including] @AtheistsFor8th—atheists who defend the unborn on lines of biological science—and @LGBT4LifeIRL.”

Leo Varadkar, a medical doctor and the Taoiseach (prime minister) of Ireland, voted in favor of repeal at Laurel Lodge in Castleknock today.

“Not taking anything for granted, of course, but quietly confident,” he said, adding, “A high turnout, I think, would be to the advantage to the ‘yes’ campaign, and obviously the upside of a good sunny day in Ireland is that people come out to vote.”

If citizens vote in favor of repeal, new abortion laws will be discussed in the Irish parliament. The government led by Mr. Varadkar proposes that terminations be allowed during the first 12 weeks of pregnancy. Later abortions would be allowed in special cases.

Thousands of Irish people living abroad have traveled home to take part in the historic referendum.

The vote will be tallied on Saturday, May 26.

As the Irish voted today, the Vatican spoke on abortion at the World Health Assembly, a yearly meeting of the member states of the World Health Organization to set W.H.O. policies and programs. It is a contradiction to claim that promoting access to safe abortions is somehow protecting the human rights of women and girls, a Vatican representative said.

"In fact, abortion denies the unborn child his or her most basic right—to life itself," said Archbishop Ivan Jurkovic, Vatican observer to U.N. agencies in Geneva.

The archbishop quoted Pope Francis: “Human life is sacred and inviolable. Every civil right rests on the recognition of the first and fundamental right, that of life, which is not subordinate to any condition, be it quantitative, economic or, least of all, ideological.”

Father Jukovic was addressing one of the agenda items of the May 21-26 meeting, specifically a global strategy for the health of women, children and adolescents.

The Vatican delegation “shares many of the concerns and observations” in the W.H.O. director-general’s report, he said, including: the importance of universal health coverage; improving specific data on health; ending violence against women and children; and revising child health policies and programs so they cover individuals from infancy to 18 years of age.

However, he said, the Vatican delegation had serious concerns about the inclusion of an item “on so-called ‘safe abortion’ in this report and in the global strategy in general.”

With reporting from AP and CNS sources

Let's face it: the moral authority of the church took a beating during the clergy abuse crisis, even in Ireland. Until the Church repents, and holds those like Mahony in L.A. accountable, its voice will be muffled for another generation, at least.

Yes, the authority of the Church took a beating. So, where does moral authority reside these days? In the state? Political parties? Universities? NGOs? Ideologues? Virtue-signalers? I don't think Western civilization can wait a generation for basic, common-sense morality. Maybe we are already off the cliff and on the illussion we are flying.

As I understand the situation, it is pretty nearly certain that the Repeal vote will win. Perhaps the Catholic Bishops of Ireland have been so un-vociferous (if there is such a word) because they don't want to see the Church suffer a public defeat. The Church has already sustained enormous reputational damage in Ireland, after all.

We have been been practicing selective vocational abortion for 2000 years, and it is, in fact, the law of the Church: "A baptized male alone receives sacred ordination validly." (Code of Canon Law #1024) This is, in effect, a sexist artificial contraceptive and abortifacient of female priestly vocations, so we better don't wave our fingers at anyone.

Sexist artificial contraceptive and abortifacient of female priestly vocations...did you dream that up in your safe space? It must hurt to not have a brain

The legality is not the key issue. Some countries where it is legal have lower abortion rates than countries where it is illegal. It is how women are treated, especially pregnant women. Cutting or not providing welfare services for pregnant women in poverty leads to more abortions--and also to miscarriages or spontaneous abortions for lack of sufficient intrauterine nourishment. The key is treating all people as Jesus called us to do. Legality is Caesar's concern. It is a side issue, a very divisive side issue that has taken center stage, with Catholics divided rather than working together as Jesus called us to do. Politics is trumping (pun unavoidable) religion.

"Do not be afraid. Open wide the doors for Christ. To his saving power open the boundaries of States, economic and political systems, the vast fields of culture, civilization and development. Do not be afraid. Christ knows 'what is in man'. He alone knows it.
So often today man does not know what is within him, in the depths of his mind and heart. So often he is uncertain about the meaning of his life on this earth. He is assailed by doubt, a doubt which turns into despair. We ask you therefore, we beg you with humility and trust, let Christ speak to man. He alone has words of life, yes, of eternal life."

How fast the insipid and PC bishops of Ireland and the entire Church have forgotten to live those prophetic words. And yet, Christ reigns and will reign. With us, without us, or despite us.

Aside from notably committed pro-life priests in NY like Msgr. Reilly and Father Pilsner, I never once heard a priest or bishop mention abortion at a Mass or public speech in the last 50 years, not even in the context of reflecting on a declining social ethos. I often wonder why the entire post WWII era failed to produce a history of a humbled humanity rather than a humanity even more committed to a collective denial of moral self-delusion. And I wonder why so many in the Church feel compelled to join the collective moral cowardice.