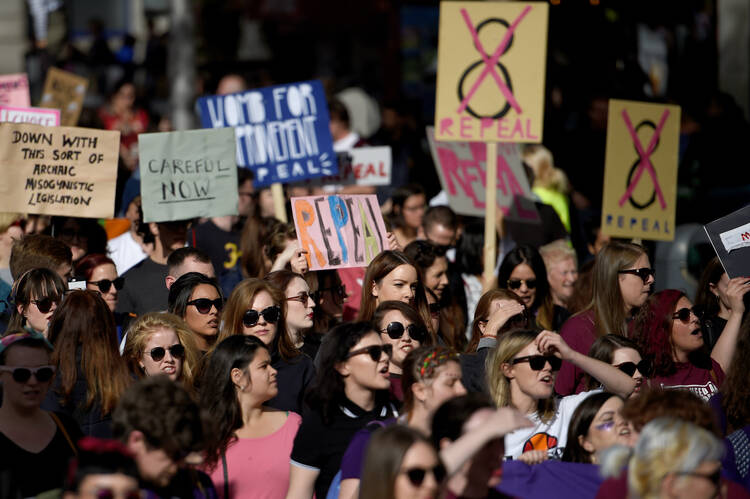 In a political development that would have been unimaginable two decades ago, the voters of the Republic of Ireland will go to the polls on May 25 to decide whether to repeal the Eighth Amendment of their Constitution, which recognizes an equal right to life for both a mother and her unborn child. In place since 1983, the amendment acts as a de facto ban on abortion, making Ireland an outlier among its European Union peers, almost all of whom have legalized abortion up to the 12th week of a woman’s pregnancy. If the hotly contested referendum passes, it will pave the way for similar legislation in Ireland.

The referendum, say many of its supporters, is simply a matter of protecting women’s health, not a question of repudiating Ireland’s Catholic past or rejecting its traditional culture. That Irish women already enjoy some of the world’s highest levels of maternal health is blithely sidestepped by referendum supporters, including Ireland’s Taoiseach (prime minister), Leo Varadkar. Mr. Varadkar’s government has made it clear that if Ireland passes the referendum, it will introduce legislation granting the unrestricted right to abortion during the first 12 weeks of pregnancy. Supporters of the Eighth Amendment, however, have voiced concerns that such a policy will be written in such vague terms and include so many exceptions that it will allow an abortion throughout a woman’s pregnancy.

"Irish women already enjoy some of the world’s highest levels of maternal health."

The United States can offer this nation’s own grim legacy on abortion as an ominous warning to the Irish people. When the U.S. Supreme Court struck down restrictions on abortion in Roe v. Wade in 1973, the decision preserved a ban on abortions after the point of fetal viability. But in another decision that same day (Doe v. Bolton), the justices construed the exemptions for a mother’s health in abortion legislation so broadly that abortion became available on demand at almost any point in a woman’s pregnancy. It is important to note that almost no one in 1973 was campaigning for abortion on demand; in fact, most of the nation would have been aghast at the suggestion. Forty-five years after those court decisions, U.S. federal abortion laws remain some of the world’s most permissive, and the country now approaches a grisly milestone of 55 million children aborted since 1973.

U.S. federal abortion laws remain some of the world’s most permissive.

In Ireland, one might suspect that on a sociopolitical level this referendum is further evidence of a longer-term reaction against the Catholic Church, whose decline in authority and influence in Ireland has been paralleled by referendums in 1995 that legalized divorce and in 2015 that legalized same-sex marriage. If so, there will be no small irony involved: that the Catholic Church’s support for the Eighth Amendment will hurt the amendment’s chances in Ireland.

The past and the future of Ireland alike cry out to its present voters for greater imagination than that. The Eighth Amendment is not a remnant of what made Ireland backward; nor is the callous disregard for unborn life that would be signified by its repeal a necessary component of a modern Irish society. Rather, a no on the referendum would be quintessentially Irish: a reminder that she always looked to her children, to the future.

Ireland lost its soul when it legalized homosexual "marriage." This is just icing on the cake forced to be baked by Catholics.