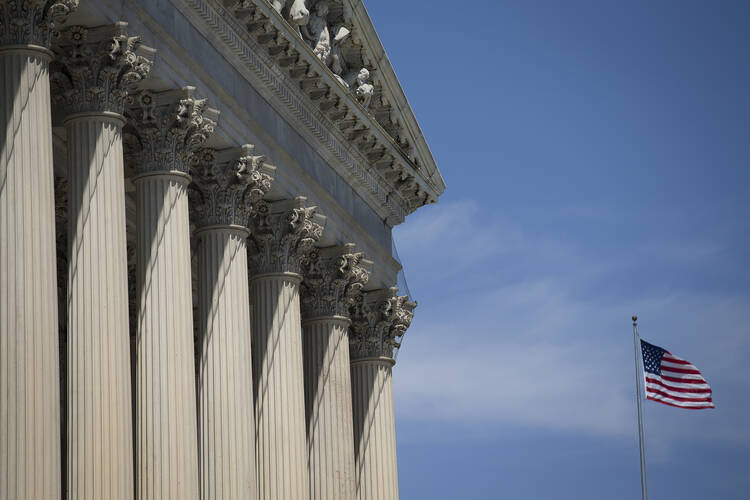 The U.S. Capitol is seen in Washington April 13. Catholic groups hailed an April 24 decision by a federal judge that said a program that benefits young adults who came into the country without legal permission as minors can still accept new and renewed applications and must maintain protections that prevent those who are enrolled in it from being deported. (CNS photo/Tyler Orsburn)

WASHINGTON (CNS) -- Catholic groups hailed an April 24 decision by a federal judge that said a program that benefits young adults who came into the country without legal permission as minors can still accept new and renewed applications and must maintain protections that prevent those who are enrolled in it from being deported.

The Trump administration announced in September it was shutting down the Deferred Action for Childhood Arrivals, or DACA, program while urging Congress to find a legislative solution to help the approximately 800,000 who benefit from the program.

But Judge John D. Bates, of the Federal District Court for the District of Columbia, said the administration did not explain why DACA was "unlawful" when it announced it was going to rescind it. Until it can do so, during the next 90 days, it must still accept and renew applications, the judge said.

"DACA's rescission was arbitrary and capricious because the department failed adequately to explain its conclusion that the program was unlawful," he said referring to the Department of Homeland Security (DHS), which administers the program.

"Neither the meager legal reasoning nor the assessment of litigation risk provided by DHS to support its rescission decision is sufficient to sustain termination of the DACA program," he wrote in the ruling.

DACA began in 2012 under executive order by then-President Barack Obama to give protection from deportation as well as a work permit and other documents to young adults who qualified.

"I welcome the decision but this should not let Congress off the hook to do what's right and find a solution immediately," said Ashley Feasley, director of policy for Migration and Refugee Services at the U.S. Conference of Catholic Bishops.

"I welcome the decision but this should not let Congress off the hook to do what's right and find a solution immediately."

The U.S. bishops know and see the anxiety and fear many of them go through on a daily basis and they are pushing for a prompt solution in Congress, she added.

"It's time for Congress to act," Feasley said because those who are affected by the lack of solutions and action "cannot wait until after another court decision or the 2018 election."

On April 25, the head of the U.S. bishops' Committee on Migration announced support for proposed bipartisan legislation that would pave a path to citizenship for 800,000 young adults who qualify for DACA and which would include others as well.

The proposed "Uniting and Securing America" Act, or USA Act, also would call for an increase in security at the border between Mexico and the U.S., an increase in immigration judges and ties U.S. aid to certain Central American countries based on their efforts to address smuggling and steps to combat corruption as well as to strengthening rule of law at home.

The Ohio-based Ignatian Solidarity Network, which comes into contact with many DACA beneficiaries at Jesuit institutions around the country, said a solution must be found and quickly. Those affected have shared their "tremendous fear regarding their ability to complete their education and pursue careers, their safety and the safety of their families, and their ability to remain part of communities that they have called home and contributed to for a significant portion of their lives," said Christopher Kerr, the network's executive director in an email with Catholic News Service.

"Congress must act to provide a permanent legislative solution that recognizes the contributions of Dreamers and their families in our society. Congressional leaders have the bipartisan support to move forward on common sense legislation that responds to the interests of both parties," he said. "The Ignatian Solidarity Network stands with the U.S. Conference of Catholic Bishops in supporting legislation that would provide Dreamers with protection from deportation and a path to citizenship."

The April 24 decision was not the first time lower courts questioned the administration's move to rescind the program, but it was the first time the Department of Homeland Security was told to accept new applications pending a determination by the courts.