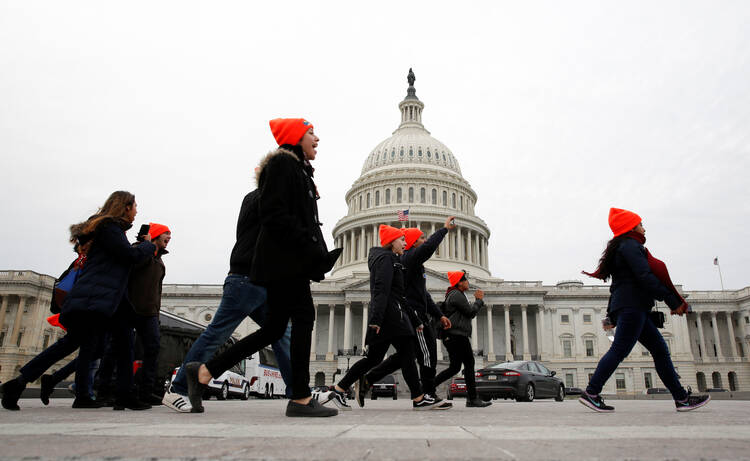 Young protesters call for an immigration bill to address the Deferred Action for Childhood Arrivals program at a rally in 2017 on Capitol Hill in Washington. (CNS photo/Joshua Roberts, Reuters)

The U.S. Conference of Catholic Bishops is urging support for a bipartisan House bill that would protect Dreamers, undocumented immigrants who were brought to the United States as minors.

Reps. Will Hurd (R-Tex.), Pete Aguilar (D-Calif.) and Jeff Denham (R-Calif.) first introduced the bill, H.R. 4796, also known as the Uniting and Security America Act, in January. The USA Act would provide Dreamers with protection from deportation and a path to citizenship. It would also fund new border security technology, increase the number of immigration judges and address root causes of irregular migration from Central America.

“We are hopeful our support of the current version of the USA Act, and our continued support of the Dream Act, will encourage Congress to act now and find a humane legislative solution for Dreamers,” Bishop Joe S. Vásquez of Austin, Tex., chair of the U.S. bishops migration committee, said in a letter to House representatives.

Last week, the authors of the USA Act announced they had enough support from both Democratic and Republican representatives to force a vote on four bills introduced to replace the Deferred Action for Childhood Arrivals program. DACA, a policy instituted by President Obama in 2012, protects an estimated 690,000 Dreamers from deportation and gives them permission to work. But after the Trump administration announced last September that the policy would end, Dreamers have lived in a state of uncertainty.

“These young people did nothing wrong and yet they have spent their entire lives in a kind of legal limbo, with limited rights and opportunities and no certainty about their future,” Archbishop José H. Gomez of Los Angeles said in his weekly column. The archbishop, while pleading with Congress to allow debate on the issue, noted that California is home to more than 25 percent of Dreamers, with an estimated 125,000 living in the Archdiocese of Los Angeles alone.

“Our country is the only country these young people know—many are now in their 30s—and they are Americans in everything except for their legal status,” he said. “It is long past time for this country to do the right thing and welcome them to make their own contribution to the American dream.”

Last week, the authors of the USA Act announced they had enough support from both Democratic and Republican representatives to force a vote.

Archbishop Gomez called the USA Act a “good-faith compromise.” He argued that, while the bishops would prefer a “clean” bill to grant legal status and citizenship to Dreamers, that is “no longer realistic.”

“We have at this moment a bipartisan way forward that will strengthen America’s borders, improve conditions in Central America that are root causes of illegal immigration and will offer compassion to those who have come here seeking a better life,” the archbishop said. “This is a victory for common sense and our common humanity. It is time for those standing in the way of a solution to stand down.”

A CBS News poll conducted in January found that 87 percent of respondents believed Dreamers should be allowed to stay in the United States.

Ashley Feasley, the director of migration policy and public affairs for the U.S. bishops, said recent court decisions, which have temporarily blocked the Trump administration from ending DACA, have taken the pressure to act off of Congress. Yesterday, a federal court judge ruled the administration must begin accepting new DACA applications, though Homeland Security will have 90 days to explain its position before the policy is reinstated. Nevertheless, the future of DACA in the courts is uncertain, Ms. Feasley said, noting that the Supreme Court could take up the issue in the fall and not uphold protections.

“We need legislation,” Ms. Feasley said, noting that the bishops continue their support of the Dream Act. “This is affecting human lives and it needs to be addressed.”

Kevin Appleby said it was a good sign that congressional leaders were still debating the issue.

Kevin Appleby, the senior director of international immigration policy for the Center for Migration Studies, said it was a good sign that congressional leaders were still debating the issue.

“Even though there are barriers, many on both sides of the hill want to do something,” Mr. Appleby said. “Whether this process or procedure will work, depends frankly on the House leadership and specifically on Paul Ryan. He’s retiring. He doesn’t need to worry about reelection. He can leave a legacy behind of supporting young immigrants.”

The Center for Migration Studies in New York estimates that there are more than 2.2 million Dreamers in the United States and fewer than half are DACA recipients.

Isaac Cuevas, associate director of immigration affairs for the Archdiocese of Los Angeles, said the fear in the community “is growing day by day.”

“More people are choosing to self-deport because they don’t want to deal with the anxiety of when it’s going to be their turn,” he said. Still, Mr. Cuevas said, more members of the community are speaking up for Dreamers.

“They’re starting to do more, to be engaged in these conversations,” he said. “The lives of millions are at stake, and as citizens, the best thing we can do is take a stand.”

In February, the U.S. bishops encouraged Catholics throughout the country to call their senators on behalf of Dreamers. But immigration bills debated in the Senate failed to move forward. The bishops hope the House will be more successful.

Laura García, a DACA recipient, reaches out to undocumented youth and young adults as part of her job at the YWCA. She goes to high schools in the New York area to encourage Dreamers to continue their education and not give up. Ms. García Not knowing their future takes a toll on Dreamers, she said.

“We need this now. We don’t need it tomorrow,” Ms. García said. “There are people who already have their minds made up, but some don’t. We have to continue to tell our stories. We have the hope that someday something will happen.”

Is there an age cutoff?

Would bishops accept residency only with no path to citizenship?