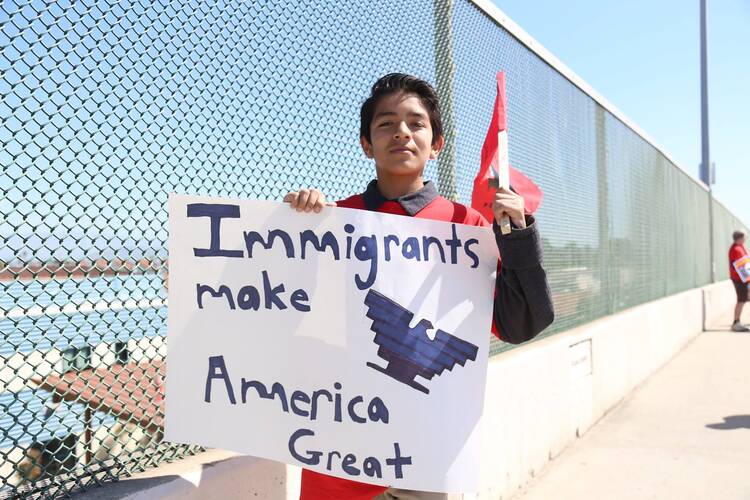 A child marches in support of immigration reform in a United Farmworker's march in Oxnard, California, on April 2nd, 2017. (Photo: Antonio De Loera-Brust)

On Nov. 6, a young man named Juan Manuel Montes was detained by Border Patrol agents just north of the border wall in California. He is the first known beneficiary of the Deferred Action for Childhood Arrivals program to have been deported by the Trump administration.

Mr. Montes’s detention and deportation are a sign of what could come on a far greater scale. It has been over two months since President Trump ordered an end to DACA, the Obama-era program that protected Dreamers—undocumented immigrants brought to the United States as children—from deportation. Yet there are no signs that we are any closer today to passage of the Dream Act, a legislative fix that would give Dreamers a path to citizenship. Some Democrats are openly flirting with the idea of forcing a government shutdown in December if legislation protecting these immigrants is not included in a must-pass spending bill. Brinksmanship is not a path to responsible governance, but the fact that Democrats are putting it on the table underscores the exigency that Dreamers face.

Mr. Montes’s detention and deportation are a sign of what could come on a far greater scale.

Most Dreamers are fully embedded in U.S. society; they are students, teachers, doctors, business owners and serve in the military. Some are the parents of U.S. citizens. If these young men and women are deported, many will almost certainly attempt to return to their homes in the United States. Most will, like Mr. Montes, be arrested and detained in inhumane conditions—at taxpayers’ expense. Others may even lose their lives on the perilous trek to the border.

Catholic leaders have been vocal in their support for the Dream Act. The question is whether strongly worded statements from the U.S. bishops and others will be enough to shake Congress into action.

“Some unjust laws impose such injustices on individuals and organizations that disobeying the laws may be justified,” the U.S. bishops wrote in 2012 in response to the Obama administration’s controversial contraception mandate. Immigration laws that break up families and expel immigrants from the only country they have ever known may also meet this criterion. Should the Dream Act fail, the church should be at the forefront of peaceful protests and demonstrations on behalf of our immigrant brothers and sisters. More direct resistance, like offering sanctuary to Dreamers and engaging in civil disobedience to forestall deportations, may also be justified.

The church must also reckon with the role many Catholics—both in public office and at the voting booth—have played in creating the current climate of xenophobia. “There’s something wrong in our churches, where the Gospel is proclaimed, and yet people leave our worship services, our Masses on weekends, with [anti-immigrant] rhetoric still echoing in their hearts,” Cardinal Blase J. Cupich of Chicago said at the annual gathering of bishops on Nov. 13.

What is lacking in the church and society at large is the same sense of urgency that Dreamers already feel. Can we prioritize the needs of our neighbor as we prioritize our own? The stakes are high: hundreds of thousands of lives, as American as our own in all but law.

Moral crisis of the parents that brought illegal immigrant children. Sounds about right. Suicide of the parents and the illegal children are possible.

Yes, immigrants make America great, what about it? Does that have anything to do with illegal aliens?