The innovative ways Catholic groups are helping migrants and refugees 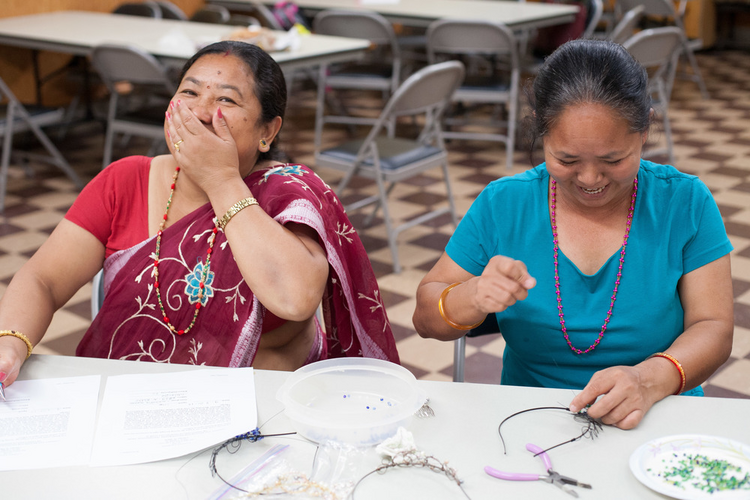 A beading session at Loom Chicago. Photo courtesy of Catholic Charities of the Archdiocese of Chicago.

Each Tuesday afternoon in Chicago’s Uptown neighborhood, a group of refugee women from places such as Iraq, Nepal and Afghanistan gather to work on textile projects. This week, some of them crochet cozies for Mason jars containing wax candles. Others embroider colorful string onto cardstock, printing “Happy Birthday!” and other greetings on the front. The items will be brought to churches and art fairs and sold online, The proceeds provide the women some extra income.

But as important as the sales is the community they are building with one another as they adjust to life in the United States.

“Every time somebody comes into the studio, they all say hello to each other, they hug each other,” Neta Levinson, who runs the program, told America.

Loom Chicago is one of dozens of Catholic-run organizations that are adept at meeting various challenges posed by the ongoing global refugee and migration crisis.

Though language can be an obstacle, the women smile, check out each other’s progress and offer assistance and ideas. Some of the women feel isolated at home, their children in school and their husbands at work. Others, who are older or perhaps now alone, came to the United States and were unable to find stable employment, so the handicraft provides an opportunity to connect with other women.

Ms. Levinson said the small community, known as Loom Chicago, provides a “sanctuary” to women in need of hope.

“It’s a community they get from having a lot of women in one room making art, and it’s a beautiful feeling,” she said.

Loom Chicago is one of dozens of Catholic-run organizations that are adept at meeting various challenges posed by the ongoing global refugee and migration crisis. It was highlighted among others identified in a new report from Fadica (Foundations and Donors Interested in Catholic Activities) and the Boston College Center for Social Innovation.

According to the United Nations High Commission on Refugees, more than 65 million people are now displaced, with more than 22 million of them classified as refugees. Pope Francis has called on secular and Catholic institutions to do more to assist those whom he has described as “excluded and marginalized,” and the report identified 64 programs spanning 32 countries, more than half affiliated with Catholic sisters. It is not an exhaustive list but a sampling of how Catholic organizations are using innovative techniques to address the global refugee crisis.

The Boston College center defines social innovation as “a new response to social problems,” which could include new services, organizations or products. The report found that Catholic initiatives addressing the refugee crisis are marked by their commitment to a range of Catholic social teaching, including respect for life, a commitment to the common good, care for the earth and promoting the dignity of work.

Tiziana C. Dearing, co-director of the Boston College center, told America that other unique attributes of socially innovative Catholic organizations include being part of the church’s vast international network and their willingness to engage in “radical repurposing of existing resources to put them at work for vulnerable populations.”

She pointed to a transitional home for refugees outside Pittsburgh as an example.

A local refugee resettlement agency had put out a call to charitable groups seeking housing for refugees arriving from Syria, many of whom had arrived in the Pittsburgh area. The Sisters of Charity of Nazareth responded, offering to convert a house they own from a home for one sister into transitional housing for one or two refugee families.

The report called the decision by the Sisters of Charity of Nazareth to convert the house “a profoundly welcoming action” that “shows a preferential option for the poor and vulnerable.” In addition to providing housing for the families, another group of Catholic sisters has offered to provide additional support for the families.

Ms. Dearing said some might not think providing temporary housing for refugee families is particularly innovative. But, she said, “most people are not moving out of their homes and giving them to someone else. Sometimes innovation is just being radical with what you've got.”

The notion of social innovation is not entirely new.

Ashoka, an organization founded in 1980 to promote social entrepreneurship, works with project leaders in 90 countries. That group defines social entrepreneurs as “individuals with innovative solutions to society’s most pressing social, cultural, and environmental challenges.” Those individuals “apply a sense of empathy for others, identify a specific problem or opportunity and give themselves permission to do something about it, and then use a combination of knowledge, resources, and determination to tackle it.”

But the Fadica study sought to highlight projects that encapsulate a Catholic approach to addressing societal challenges, offering a range of examples that live out these principles.

For example, the Sisters of the Good Shepherd, who have a charism to work with migrants and refugees, conducted job training projects for 1,200 women in Bolivia and Chile who were at risk of becoming migrants. “An amazing statistic...all 1,200 women got a job. And 60 percent of the women who were potentially going to migrate decided to stay with their families,” Fadica president and C.E.O. Alexia Kelley told Catholic News Service.

The project also built community with the women, who otherwise largely lead isolated lives, she added. “To me, this is getting at the root cause of migration” and preventing it, Ms. Kelley said. The Sisters of the Good Shepherd sponsored seven projects cited in the study.

Philanthropists and charities seeking to respond to the refugee crisis should be patient, flexible and willing to partner with other nonprofits, the report says. They should also recognize that tackling new projects is not always easy—and set aside “risk capital” for ideas that “sometimes fail,” and also agree to fund operating costs and help replicate successful projects.

For Ms. Dearing, the Boston College researcher, Catholic social teaching and social innovation are a match made in heaven.

“This whole concept of social innovation is at some level inherently Catholic in itself,” she said. “Catholic values challenge us to welcome the stranger, and I think these organizations are coming out of a tradition that make it necessary to do this work.”