Migrants around the world seek dignity and safety 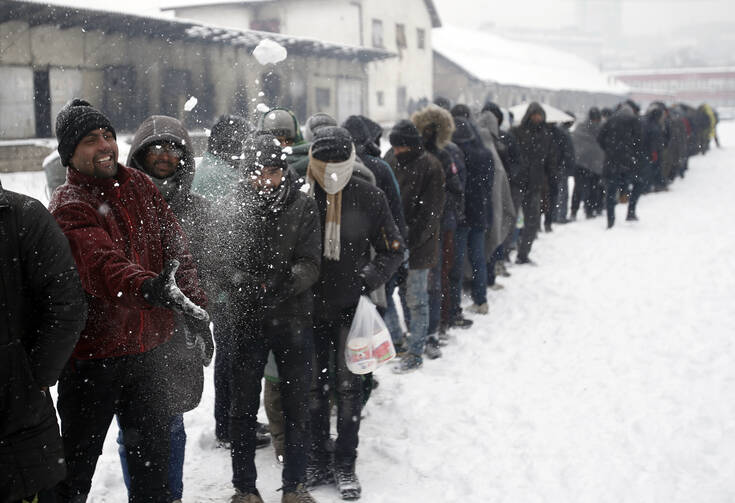 God's perspective reveals a world of people in sometimes desperate motion—among millions of others, more than 3.3 million Iraqis, 4 million Syrians and generations of Afghans have fled their homes to escape conflict. “I can’t imagine a more urgent time to be addressing issues of migration and refugees,” says Jill Marie Gerschutz-Bell, the senior policy and legislative specialist for Catholic Relief Services. “The international community has really been stressed by the significant number of people on the move, so of course if God's looking down, he's saying, 'You really need to do more to help these people,'” she says.

According to Ms. Gerschutz-Bell, more than 200 million people around the world are migrating away from poverty and crisis, seeking a better life for themselves and their children. On top of that figure are 65 million “forcibly displaced,” people fleeing conflict, sometimes across borders as refugees or driven from their home communities within their own countries as internally displaced people.

U.N. officials say these staggering figures represent the largest number of people in flight since the end of World War II. Many of the world’s migrant and refugee populations are already well known. The millions escaping conflict in Iraq and Syria are just about daily features in Western media, as are the tensions they create in efforts to reach safety and opportunity in Europe. Less well known have been desperate migrations taking place in African states like the Central African Republic and South Sudan, according to Ms. Gerschutz-Bell, as conflict and poverty persist in those nations and others.

Efforts to respond to the global crisis of migration are straining budgets not only at humanitarian agencies like Catholic Relief Services but among nations near points of flight. Many of them are nations least able to bear additional burdens on their own.

The international community has accepted criteria that establishes refugee status, creating binding obligations for host nations. But the church, says Ms. Gerschutz-Bell, acknowledges deeper moral obligations to a broad population of people on the move, who are often migrating to escape poverty, rampant crime or hopelessness and who are in need of welcoming and assistance whatever their legal status.

“We look to Europe and the Middle East in judgment sometimes,” she says, “And yet if we think about the people coming to our borders, the United States government hasn’t responded in a way that would make us proud as Judeo-Christians.”

In 2014, the nation was shocked by the phenomenon of unaccompanied minors, some as young as 6 years of age, migrating from Central America to the U.S. border with Mexico. According to Ms. Gerschutz-Bell, even more unaccompanied minors came in 2016, though the issue has garnered less public attention. “Children in particular are coming seeking asylum,” she said.

President-elect Donald J. Trump, who begins his administration on Jan. 20, “is not appearing to be very open to this community,” she worries. “As Catholics we need to find ways to make it known to our elected officials that we think [migrating people] deserve due process to make their asylum claims.”

That may be a position a lot of Catholics who supported Mr. Trump’s candidacy may be reluctant to accept. But the church’s position on border security and migration is “very reasonable,” Ms. Gerschutz-Bell assures.

What the church has said, though, is sovereignty has to be measured against a moral responsibility to people from neighboring states who are fleeing poverty and violence. Beyond its recognition of a right of people to migrate to escape violence or deprivation, the church also asserts “the right not to migrate,” the right, Ms. Gerschutz-Bell explains, for people to be able to remain in their home countries and have their human needs addressed and human dignity respected.

Related: Beyond the Wall — Stories from the other side of the immigration crisis

She challenges the persisting willingness of U.S. administrations to commit billions to border security while maintaining a comparative trickle of aid for economic and social development in Central America. “Nothing stops a bullet like a job,” she says. “If people have opportunity to go to school or to find work they are less likely to fall into the gang activity that has really created the instability in Central America.”

Establishing a better balance between border security and regional assistance, she argues, will begin a long term solution to the problem of migration in the Americas that “promote human dignity and will get the results we want to achieve.”

To that end, she urges U.S. Catholics to let their congressional representatives know about their willingness to welcome and support people who are migrating. She points out that the impact in Central America C.R.S. has managed with just modest resources has been “miraculous.” One program in Honduras in just one year managed to raise provincial literacy rates 22 percent, she says.

“Let our members of Congress know that we are for a dignified response; we are for due process and protection of asylum [seekers] and we do support welcoming strangers and those in need in a dignified way.

“We can do that, talking to members of Congress, [and] we can do that in our own parishes looking at our communities and identifying where there are needs, English as a Second Language classes, for example.” She adds that local offices of Catholic Charities make a good place to start. “If our parishes could get more involved volunteering with Catholic Charities, we would see the kind of solidarity that we know can change the world,” she says.

Kevin Clarkeis chief correspondent at America magazine and the author of Oscar Romero: Love Must Win Out. Twitter: @clarkeatamerica.