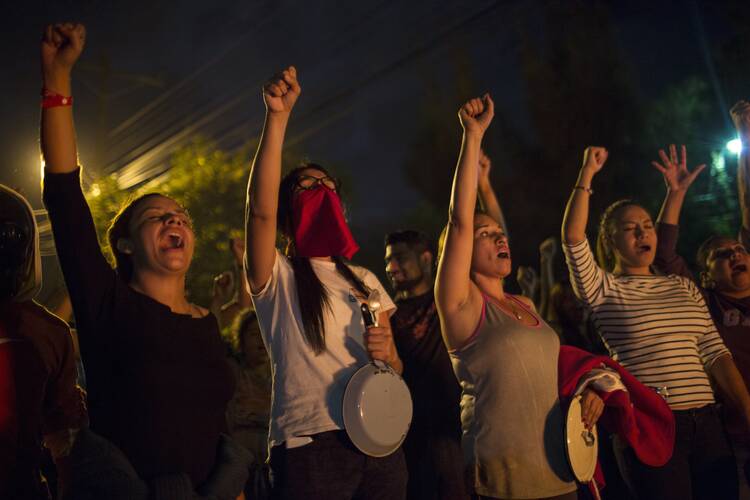 Pope Francis says he is praying that Honduras can peacefully overcome a violent political crisis after deadly protests erupted in the Central American nation after a delayed vote count in a hotly disputed presidential election. Pope Francis told pilgrims gathered in St. Peter’s Square on Dec. 3 that he was remembering Hondurans in his prayers in a special way so they “can in a peaceful manner overcome the current difficult moment.”

Clashes between protesters and police began on Nov. 30 as incumbent President Juan Orlando Hernandez emerged with a growing lead, following a reported computer glitch that shut down the vote counting for several hours. Both the National Party incumbent and his rival, television personality Salvador Nasralla, representing the Alliance Against the Dictatorship, have claimed victory in the Nov. 26 election.

The Central American province of the Society of Jesus commented on the unrest, criticizing the nation’s electoral agency and offering its support to street protesters. In a communique released on Dec. 3, the Jesuits denounced “the lack of professionalism and ethics of the Supreme Electoral Tribunal” because of its systematic failure to track and report the election results.

“It is no longer just a suspicion, but a certainty,” the Jesuits wrote, referring to “the crude manipulation of this situation by the magistrates, influenced by the real and shadowy power from the state and other places in an attempt to disregard the popular will expressed in the polls.

“The Supreme Electoral Tribunal goes from fall to fall to hide an unexpected victory by the opposition over the current president who did everything that he could, legal and illegal, to be re-elected.”

The Jesuit provincial leadership also denounced “the repression of the Honduran people by agents of the state,” adding, “the people again teach us a lesson about civic duty, dignity and the peaceful defense of the rights of citizens.” The statement was signed by P. Rolando Alvarado López, S.J., provincial of the Central American Province; and Francisco Iznardo Almiñana, S.J., the coordinator of the province’s social apostolate.

The Jesuit provincial leadership denounced “the repression of the Honduran people by agents of the state.”

The Honduran bishops urged a peaceful dialogue toward ending the crisis. They urged that the crisis be used as an opportunity to restore the rule of law in Honduras, to strengthen its civic institutions and “to advance in the struggle against impunity, corruption, and poverty.”

The conference urged “all sectors of society—political, academic and religious” to begin “a frank, effective and creative dialogue that will permit us to reach the minimum agreements needed for governability and governance, restoration of the peace and civic coexistence in our Honduras.”

Fifty-eight percent of the votes had been counted on Nov. 26 when the election tribunal—controlled by Mr. Hernandez’s allies—halted the count and released no information for more than a day. When the count began again it showed Mr. Hernandez quickly closing the gap and overtaking Mr. Nasralla. The tribunal then delayed declaring a winner on Nov. 29 due to a computer crash, fueling further suspicions.

“The computer system crashed and when it returned … the difference between Nasralla and [Mr. Hernandez] shrunk from 22,000 to 3,000. The criminal fraud is about to be consummated,” tweeted Ismael Moreno, S.J., an outspoken critic of Mr. Hernandez and the Honduran elite. “By consummating it we would be in the most dangerous political situation in our history.”

Salvador Nasralla has alleged fraud and said he will not respect the official results.

Mr. Hernandez held on to a lead of about 52,000 votes as the long-delayed count wrapped up on Dec. 4—giving him 43 percent to Mr. Nasralla’s 41.4 percent, according to the latest results published on the electoral tribunal’s website.

“I have asked them to repeat the elections, but only those for the presidency, with the aim of resolving the crisis that Honduras is suffering,” Mr. Nasralla told The Associated Press. But he said the new election should be “under the supervision of an international electoral tribunal, not the local one because there aren’t sufficient conditions to guarantee” the vote would be fair.

Mr. Nasralla said the government had not responded to his proposal. “And I don’t think they will,” he added.

Opposition-party supporters protested with bonfires and roadblocks across the country over the weekend. Hooded demonstrators threw rocks and pieces of wood at riot police carrying batons and shields. They responded forcefully with tear gas and water cannons as calls to maintain calm went unheeded.

At least four people were admitted to the University School Hospital, in Tegucigalpa, with injuries to the head and neck. Red Cross workers also attended to people in the streets, including one young protester bleeding profusely from the head. In the northern municipality of Santa Rita, police reported that two officers and a member of the military were injured by protesters.

Via Twitter, Mr. Nasralla asked his supporters to continue to protest peacefully and not be provoked into violence. Luis Zelaya, the presidential candidate for the Liberal Party, who was running a distant third in the vote, called for his supporters to “defend democracy.”

Caritas de Honduras, the social service arm of the Honduran Church, scolded all parties for calling their supporters into the streets. “That situation every day makes integration of society and the recovery of governability more distant,” it said in a statement. The Jesuit leaders, however, supported protesters. “We stand in solidarity with the peaceful defense of democracy and the rights that the Honduran people are upholding across the country,” they said.

According to the communique, “a large part of the Honduran people” are being brutally repressed “for protesting against an unconcealed and blatant electoral fraud.”

By America staff with AP and CNS reporting