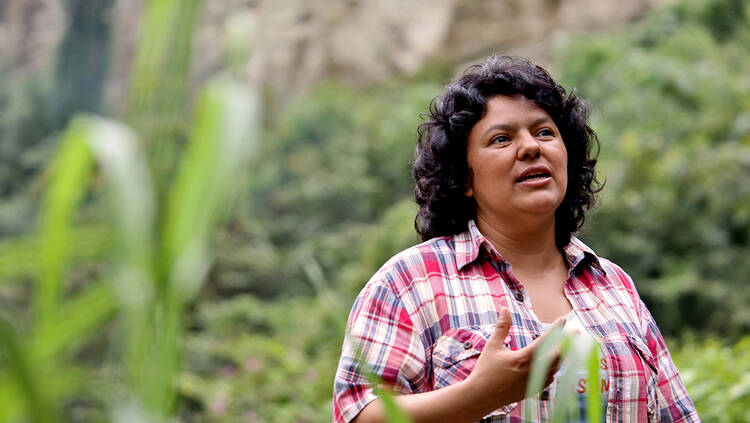 Friends, family members and activists associated with the slain Honduran Berta Cáceres report little faith in the integrity of the police investigation into her homicide and are calling for an independent investigation through the Inter-American Commission on Human Rights. According to Jennifer Avila, an investigative reporter for Jesuit-supported Radio Progreso in Honduras, friends and family members don’t trust the official government investigation into the homicide of Ms. Cáceres, an internationally recognized defender of the environment and indigenous communities in Honduras, because government officials had paid little attention to the last threats Ms. Cáceres had received. She and her organization, the Council of Popular and Indigenous Organizations of Honduras, had been working for years to thwart the massive Agua Zarca hydroelectric dam project.

“They are prioritizing personal issues as a cause of the crime,” Ms. Avila reports via email from Honduras. “She was criminalized by Honduran authorities because of her activism, so now it is too difficult for her family to think the same system is going to make an independent and true investigation.” Ms. Avila says investigators so far have shown a “clear interest to inculpate partners or people who were close to her so they could say it is not a political murderer.”

The only witness to the crime, a Mexican activist named Gustavo Castro, reports that authorities have only shown him pictures of people at demonstrations with Ms. Cáceres and fellow activists to review as suspects. Mr. Castro had been shot by the same two men who murdered Ms. Cáceres after storming her home in the city of La Esperanza in western Honduras in the early morning hours of March 3; he survived by playing dead.

“All of the images [Mr. Castro has been shown by police] are from people of the same organization that Berta led,” Ms. Avila says. Meanwhile, indigenous activists and Ms. Cáceres's family report feeling newly threatened, according to Ms. Avila.

“They say some strange people are surrounding them in the communities, and they are afraid because they know that if there is no justice, they will be next victims.”

The project Ms. Cáceres had been resisting at the time of her death, the Agua Zarca Dam, is intended to be constructed on the Gualcarque River. It had been pushed through without consultation with the indigenous Lenca people—a violation of international treaties governing indigenous peoples’ rights. The Lenca have been opposed to the dam, which would not only obliterate the land and lifestyles held by many of their communities but would represent, they argue, a violation of the land and river they hold sacred.

An independent U.N. human rights expert called on the Honduran government to ensure the safety and protection of the witness Mr. Castro. He has been blocked from leaving the country for 30 days.

“I urge the authorities of Honduras to guarantee that the life of Mr. Castro Soto is not put to risk and to allow his return to Mexico as soon as possible,” said the U.N. Special Rapporteur on the situation of human rights defenders, Michel Forst.

He also called for “an immediate, independent and impartial investigation” into the death of Ms. Cáceres.

The U.S. State Department on March 4 called for a “prompt, thorough, and transparent investigation and to ensure those responsible are brought to justice,” and F.B.I. agents were dispatched to Honduras to assist in the investigation.

Despite the sense of a heightening threat, Ms. Avila says the activists she has spoken to remain as committed as ever to halting the dam project and other “developments” which trample the rights of indigenous people in Honduras.

“It is so common to hear from them, especially indigenous women, that they are not afraid to die, and that they are sure they will be next victims, but they will continue,” Avila says. “The first demand is justice for Berta and the second one is to stop the Agua Zarca project. They are asking the government to cut the dam contract and name the Gualcarque river as a national heritage [site]. They are also asking to cut every project—it could be mining or for energy production—that threaten indigenous communities.”

According to Ms. Avila, local activists hope the international community will pressure Honduran authorities into permitting an independent investigation of the killing of Ms. Cáceres. Beyond that, they hope citizens outside Honduras will “push their countries, enterprises or international funding agencies not to support projects like the dam in Rio Blanco, which is supported by the Finland fund and also receives support from USAID. The [indigenous] communities have the right to decide which project they accept or which not to accept, and that right is being violated in this country; that has to be an international demand, also.”