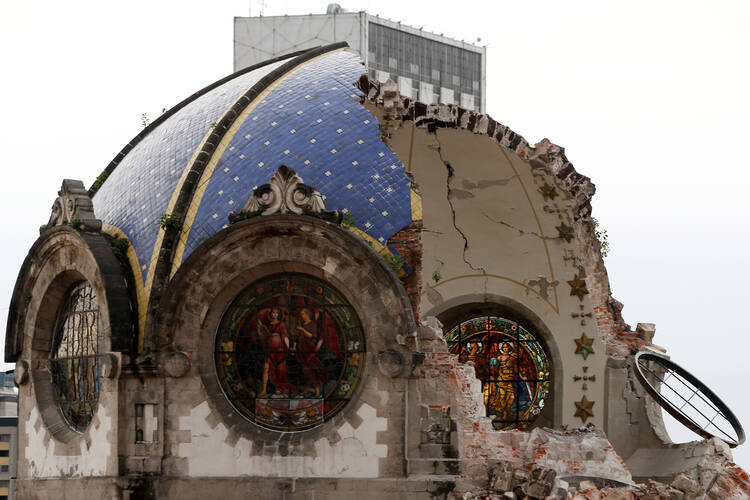 The destroyed dome of Our Lady of Angels Church is seen Sept. 24. following the Sept. 19 earthquake in Mexico City. (CNS photo/Carlos Jasso, Reuters)

In front of Our Lady of Angels Church, just north of Mexico City’s historical center, a defiant sign stands next to two big chunks of brick and mortar. “Your parish is still active,” it says, although the area surrounding the building has been cordoned off with plastic tape.

When facing the main entrance to the magnificent 19th-century church, one only has to look slightly to the left to see that half of its massive dome has collapsed, exposing the interior paintwork to the elements. Active the parish may still be, but no Mass will be held here any time soon.

Our Lady of Angels Church is perhaps the most emblematic, but it is only one of the many religious buildings damaged by the 7.1-magnitude earthquake that hit Mexico City on Sept. 19, following an 8.1-magnitude tremor in the country’s southeast on Sept. 7. In the historical neighborhood of Coyoacán, part of one of the towers of the Saint John the Baptist Church came crashing down. The Metropolitan Cathedral, the nation’s largest, saw sculptures fall from its facade and cracks appear in its massive walls. In the states of Puebla, Morelos and Estado de México that surround the capital, the destruction is even more widespread. In Puebla, east of Mexico City, the iconic Remedios Church, built on the site of what was one of the greatest pyramids of pre-colonial Mexico, lost the top parts of both its towers.

Parishioners rushed to save paintings and statuettes, but the church will have to be demolished.

While the damage in the capital and other major cities has been well documented, there are also hundreds of small churches and other historical buildings in smaller towns and villages in the region that may have been damaged by the earthquakes. Some of those communities are difficult to reach, and government help was slow to arrive, as America reported in September.

Such is the case with the San Marcos Xochicalco Church, in Tetela del Volcán, a small town in Morelos state just south of the Popocatéptl volcano. When America visited the community shortly after the earthquake, the church’s front wall showed deep cracks and fissures.

“There’s no way to restore it,” Uriel Sánchez, a member of the parish, told America. “They’re going to have to take it down. It’s sad, really, it’s stood there for so long and survived everything until now.”

Just several miles to the northeast, in San Antonio Alpanocan, a community of 2,500, the top part of the town’s Catholic church looked crumbled, as if it were about to fall any moment. In the days after the quake, parish members rushed to save paintings and centuries-old statuettes, but the building will have to be demolished.

The federal Ministry of Culture estimated in a press release that at least 1,225 historical buildings in at least 11 states had suffered some degree of damage.

On Sept. 27, the federal Ministry of Culture estimated in a press release that at least 1,225 historical buildings in at least 11 states had suffered some degree of damage. The southern state of Oaxaca, right between the epicenters of both the Sept. 7 and Sept. 19 quakes, needs the most repairs, followed by Puebla, Morelos and Estados México. Among the affected buildings are 11 monasteries from the 16th century in Morelos State. All in all, the federal government estimates that the forces of nature have caused almost 50 billion pesos in material damage, or some $2.5 billion.

“It’s still not entirely clear how extensive the damage has been to the historical buildings, especially churches, during the earthquake,” Lourdes Nava, a restaurator for the National Institute for Anthropology and History (INAH), told America. “In the state of Morelos alone, we estimate that up to 90 percent of churches has been affected to some degree.”

A large number of church buildings that were damaged by the quake now have structural problems, some irreparable. And though many parishioners managed to salvage pieces of art and objects of historical value, INAH fears that other such objects may be lost forever.

“Many churches that have not collapsed lost part of the roof, exposing the interior to the elements,” Nava explained. “Frescos and other pieces of art that cannot easily moved are in danger of being permanently damaged.”

In the wake of the September tremors, INAH and the Ministry of Culture dispatched dozens of teams of inspectors and restaurateurs to assess the extent of the quake’s devastating effects, but their efforts are hampered by a lack of personnel and the sheer magnitude of the job.

“We usually have one or two permanent representatives in every state dedicated to inspecting historical buildings and order repairs,” Nava said. “But after an extraordinary event such as an earthquake we obviously face more work than we can handle.”

Rebuilding is expected to take a long time. On Nov. 19, Mexico City Mayor Miguel Ángel Mancera said he believes the capital alone may need up to seven years to fully recover from the earthquake. Many churches in smaller communities may have to wait at least as long before they are fully restored.

“It’s going to be difficult, but we’ll eventually recover,” Óscar Cruz, a spokesperson for the Diocese of Cuernavaca in Morelos State, told America. “The damage has been historical, but it also caused people to show their best side and the strength of their faith.”