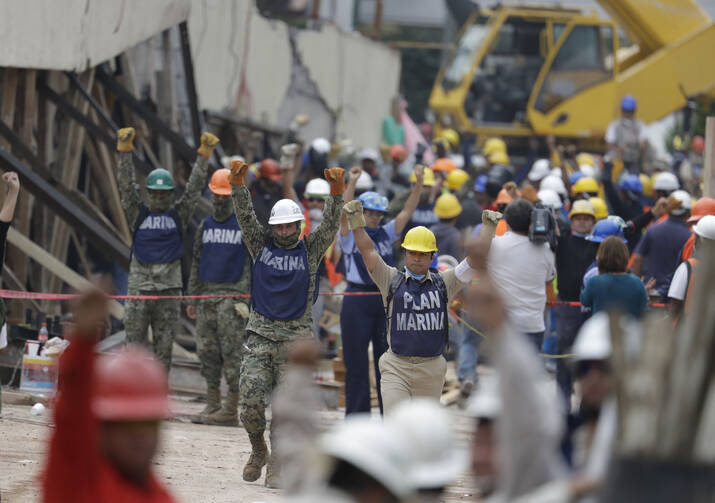 For more than a day, she captivated audiences in Mexico City and the world and became a rallying symbol for a city desperately searching for survivors after a devastating earthquake on Sept. 19. The 12-year-old girl, named Frida Sofia, was reportedly buried under the remains of a collapsed school in Mexico’s capital and still alive. As emergency workers slowly labored through the rubble to find her, national and international media worked themselves into a frenzy, hoping for stunning live coverage of the girl who was destined to be the poster child of the horrific disaster.

But the girl, as it turned out, never existed. In a matter of hours, the name Frida Sofia went from being a symbol of hope to an example of an out-of-control media, propelled by dubious journalistic and government practices.

In a matter of hours, the name Frida Sofia went from being a symbol of hope to an example of an out-of-control media.

The ensuing rage on social media focused on Televisa, Mexico’s biggest and most powerful television broadcaster, which is often maligned as being too sympathetic to the ruling Institutional Revolutionary Party (P.R.I.) of President Enrique Peña Nieto. After the Enrique Rebsamen School collapsed during the earthquake, the networks aired heavy coverage of the rescue efforts at the ruins of the building, filling the airwaves with stories of little Frida and her imminent rescue.

As the story unraveled, Televisa was accused by many of promoting poorly researched “fake news” to boost its ratings. The criticism was so severe that, in a broadcast with little precedent, the network’s most prominent anchors and an on-site reporter spent a good chunk of their afternoon broadcast defending their editorial choices and blaming federal authorities for the fiasco. Other media, both domestic and foreign, had also widely covered the story.

“I believe that this mistake was the result of a mixture of adrenalin, weariness, little coordination and simple incompetence,” reporter Verónica Calderón, who has contributed to The New York Times and other publications, told America.

As the rescue operation continued, Televisa reported that a girl named Frida Sofia was still alive somewhere underneath the rubble. The possibility of her rescue rallied Mexicans, lifting the spirits of aid workers on the ground; social media began using the hashtag #FridaSofia.

But on Thursday, education secretary Aurelio Nuño said that the parents of the girl, whose identity was never confirmed by the authorities over the course of two days, could not be located. In the afternoon, a spokesperson for the Mexican Navy told reporters that no more children were believed to still be somewhere in the collapsed building; all were either with their parents or died in the earthquake. Rescue workers are still searching for one possible victim in the collapsed school, reported to be an adult.

“We’re all to blame, because we all wanted her to exist.”

The initial hope for a positive story transformed into a national outrage, and other journalists began to question Televisa’s decisions. Many asked why the network’s reporters had not bothered to ask the school for confirmation of the girl’s identity or double-check the story by searching for possible friends and family members. Although one reporter for the network claimed to have spoken with the child’s parents, the reporter said that they had asked to remain anonymous, so their identity was never confirmed.

In fact, the reporter’s only source seems to have been a navy spokesperson present at the site of the disaster. The navy later admitted to being the source, and Televisa refused to apologize for the mistake, instead blaming the authorities for providing inaccurate information.

Deportees from U.S. to Mexico are strangers in a strange land
Jan-Albert Hootsen

“Televisa and the navy are both at fault,” said Julio Hernández López, a prominent columnist for the La Jornada newspaper, on Twitter. “The first obsessively stuck to a dramatically false story, the second permitted and collaborated in this mistake.”

Other media were also blamed for following Televisa’s reporting too closely without double-checking the facts. “We’re all to blame, because we all wanted her to exist,” Gabriel Stargadter, a Mexico City-based reporter for Reuters, said on Twitter. “Now move on.”

That may be more difficult for Televisa than for the other media that reported on the story. The network for years been the target of widespread criticism that it is too close to P.R.I. and President Nieto. The network has had unequaled access to government sources for many decades, enabling it to often break major news stories, but “Fridagate” may have damaged that privileged relationship, according to Ms. Calderón.

“It’s one of the worst scandals that a medium of this size has faced, and without a doubt one of the worst in Mexico,” she said. “Televisa has always had privileged access to government sources and places. I’m not sure whether the Mexican government will maintain that relationship,” she said after the television network has blamed the authorities for its own erroneous reporting.