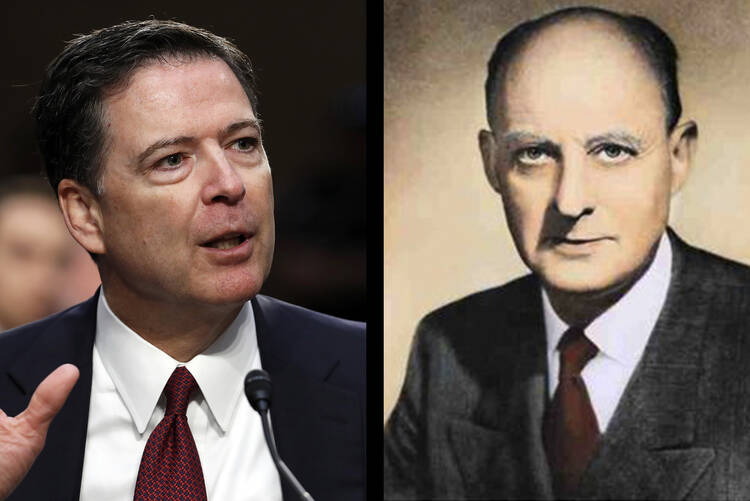 The late Reinhold Niebuhr, the United States’ premier Protestant public theologian of the mid-20th century, is back the news. Last spring we learned that the former F.B.I. director James Comey had adopted the handle @Niebuhr for his secret Twitter account. On Nov. 6 Politico revealed that Mr. Comey had shed his online alter-ego and gone public with a new Twitter account, @Comey.

Niebuhr continues to be the favorite theologian of Americans in public life. In 2010 President Obama appealed to Niebuhr’s Christian realism in his Nobel Peace Prize lecture to make his case for the use of force to preserve the peace. The New York Times columnist David Brooks, who is theologically well read, appeals repeatedly to Niebuhr in his writing.

Niebuhr continues to be the favorite theologian of Americans in public life.

Niebuhr’s popularity with pundits and foreign relations realists grew out of his thesis that in a sinful world justice and right have to be defended with countervailing power. Hans Morgenthau, the University of Chicago’s leading international relations theorist at the time, offered Niebuhr the singular tribute, “He is the father of us all.”

Secular thinkers tend to speak of an anarchic, disordered world rather than a sinful one, and later in his career, Niebuhr himself confessed he wished he had not appealed so much to original sin. He had been impressed by a newspaper editorial to the effect that original sin is the only empirically verifiable doctrine of Christianity.

But his contention that nations “do not easily attain any degree of self-transcendence”—so they tend to be “morally complacent, self-righteous” and lack the perception of irony that comes from a sense of the ambiguities of human action—is hard to deny.

Over the years, tough-minded realists cited Niebuhr’s realism as justification for their foreign policy preferences.

Over the years, tough-minded realists and liberals wanting to show their spine cited Niebuhr’s realism as justification for their foreign policy preferences. In large part, Niebuhr himself was responsible for their preening tough-mindedness. He was himself a frequent commentator on international relations and U.S. policy and a controversialist who labeled his adversaries sentimental “idealists.”

Commenting on Pope John XXIII’s encyclical “Pacem in Terris,” for example, he wrote, “[John’s] idealism is a little too easy.” But within a decade that encyclical set off the Catholic human rights revolution, which Samuel Huntington later styled “Third Wave Democratization,” giving the lie to the accusation that the pope was an impractical dreamer.

Since Niebuhr’s day, of course, we have plenty of examples of the illusions of fuzzy-minded realists, too: in Vietnam, in the dirty wars of Latin America’s Southern Cone, in the proxy wars in Central America, in the invasion of Iraq, in the unending war on terrorism and the embrace of the Saudi-Israeli vision for the future of the Middle East.

Commenting on Pope John XXIII’s encyclical “Pacem in Terris,” for example, Niebuhr wrote, “[John’s] idealism is a little too easy.”

Niebuhr’s disdain for idealists grew out of his own disillusionment with his early years as a social gospel pastor in Detroit committed to socialism and pacifism. In An Interpretation of Christian Ethics(1935), Niebuhr delivered a full-throated indictment of “the sentimental illusions” of liberal Christianity for holding “that love and cooperation are superior to conflict and coercion, and that therefore they must be and will be established.”

Love, he contended, is “a possibility for the individual” by God’s grace but not by a moralistic will to bring God’s kingdom to earth. On this point, he appealed to the Catholic teaching that the theological virtue of charity is infused.

But the belief that love was wholly beyond the natural capacity of fallen humanity in community he owed to his own Protestant theological tradition.

The conclusion he left with his readers and that he only revised late in his career was that politics and social institutions are necessarily coercive in their working. That was not, however, the Catholic position at the time, nor is it today.

The conclusion Niebuhr left with his readers was that politics and social institutions are necessarily coercive in their working.

Thomists and neo-Thomists believed that sociality was essential to human nature and that communities were held together first by adhesion to the common good and only then by coercion. Even Augustinians of the day, who had a greater tolerance for coercion to restrain sin, understood political community to belong to the order of human loves.

Only later, as he confessed in Man’s Nature and His Communities (1965), after closer involvement across denominational lines with Catholics and Jews, did Niebuhr come to see the potential for good in human communities.

He would have been surprised, nonetheless, by the role forgiveness, reconciliation and peace building came to play in international affairs in the 1990s and 2000s.

Niebuhr would have been surprised by the role forgiveness, reconciliation and peace building came to play in international affairs.

The mistake realist political theorists and politicians make is to hold to Niebuhr’s premise about the need for coercion in politics without appropriating his parallel thesis that in “immoral society” egoism is greatly magnified with pretensions to greatness buttressed by collective rationalizations. As a result, nations easily deceive themselves and lack the self-awareness and humility that can lead individuals to repentance. If they did, they would have a keener sense of their limits.

James Comey, alias Niebuhr, seems not to be one of those tough-guy devotees of Niebuhrian realism. In a careful appreciation of Niebuhr’s significance for Mr. Comey in the New Yorker, Paul Elie suggests that Comey understands the human potential for the abuse of power, the risks of unintended consequences and the downside of making decisions in conditions of uncertainty. Contrasted with most theorists and practitioners who invoke the Niebuhr name, Mr. Comey seems to be “the complete” Niebuhrian.

James Comey is perhaps a better Niebuhrian than Niebuhr himself.

During his tenure as director, he also required F.B.I. agents in training to “study the F.B.I.’s interaction” with Dr. King and urged them to visit the Martin Luther King Jr. Memorial on the national mall. “The reason I do those things,” he told a Georgetown University audience in 2015, “is to ensure that we remember our mistakes and that we learn from them.”

In the coils of history in which James Comey’s F.B.I. career came to an end—and in the unintended consequences of his handling of the bureau’s investigation of Hillary Clinton’s emails—he may find “the consolations of philosophy” in Niebuhr’s ironic vision.

“There is a transcendent perspective from which ‘all our righteousnesses are as filthy rags,’” Niebuhr wrote in The Irony of American History. “Implied in such a faith,” he went on, “is a sense of a goodness which not only fulfills, but may negate the highest human goodness.” It is the vision of the Book of Job where “God refuses to be judged by human standards of justice and quiets the protests of Job by overawing him with the mysteries of the world beyond his ken.” That is a vision to which Niebuhr’s would-be imitators seldom refer.

Drew Christiansen, S.J., former editor in chief of America and an international correspondent for Civiltà Cattolica, is Distinguished Professor of Ethics and International Affairs at Georgetown University and a senior research fellow at the Berkley Center for Religion, Peace and World Affairs.

Thanks for this thought provoking essay. It is especially helpful in pointing out some of Comey's more Niebuhrian tendencies.

However, one should note that Niebuhr himself opposed Vietnam. It also seems strange to suggest that those who invaded Iraq were "realists" in any significant sense. Their belief that it would be easy to spread democracy around the world marks them as particularly idealistic in Niebuhr's sense.

The defense of John XXIII is also a bit overwrought. The continual failure of global government has followed almost exactly the path that Niebuhr predicted. Here it seems that there is a great deal of truth in Niebuhr's criticism of John's idealism.

As for Comey, it would be interesting to know more about how he interprets Niebuhr. But I find it hard to think that a guy who would tweet a picture of himself in Iowa (hinting at presidential pretensions) after mishandling the Clinton probe so severely is Niebuhrian. Tweeting that picture speaks to a level of hubris that fits American politics only in the Trump era.

Thanks again for this thoughtful article.

Excellent article on both Niebuhr and Comey.

I cringe when I hear the name "Niebuhr". To me its short hand or code for militarism and the belief that even as professed Christians we don't have to feel guilty about killing countless men, women and children. God's on our side sanctimony; when we kill we're good but when they kill they're evil. It's not an accident that after almost two decades of wars including bombing campaigns in populated villages that kill civilians; perhaps millions have been killed by our bombs and wars, without us "batting an eye ", as "Niebuhr" is invoked.
For one conscious who professes to be mindful of the potential for abuse of power, Comey abused his power when on the eve of the election he goes public with an investigation into Hillary Clinton. The Clintons and the Democrat Party should have sued him for this abuse of power as that power ploy, [whether it was done out of malice or incompetence or hedging his bet to be on a winning side , only he knows,] more then fake posts in the sea of the internet posted by Russians or anyone else, may have cost her the election. Firing Comey was the most justified of actions Trump has taken [imo] even as it has cost him politically. The main stream media and the anti Trump politicians have now become Comey sycophants, erasing from history how they themselves were criticizing him for what he did to Hillary and for not speaking the whole truth under oath before a congressional committee.