The Editors: U.S. Strategy in the Middle East Is Deeply Problematic 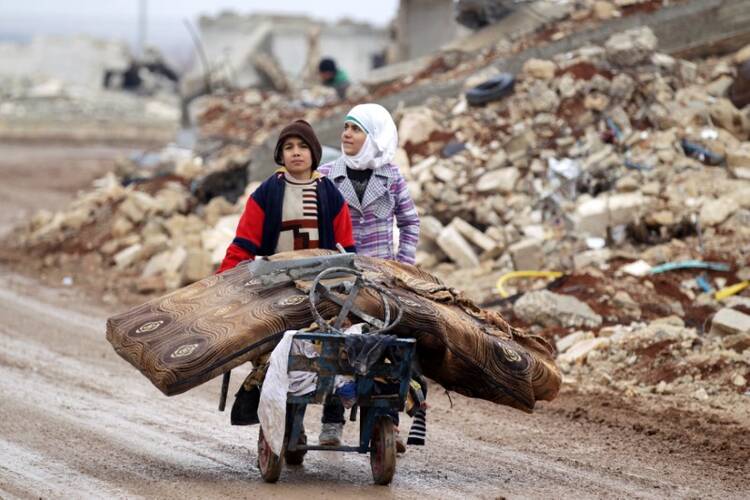 A brother and sister transport their salvaged belongings from their destroyed house Jan. 2 in Aleppo, Syria. (CNS photo/Khalil Ashawi, Reuters)

In his landmark speech last month in Riyadh, Saudi Arabia, President Trump called on all “responsible nations” to “work together to end the humanitarian crisis in Syria, eradicate ISIS and restore stability to the region.” While all three are desirable goals, the strategy for achieving them that Mr. Trump outlined in that same speech will achieve precisely the opposite. “Until the Iranian regime is willing to be a partner for peace,” Mr. Trump said, “all nations of conscience must work together to isolate Iran.” The president then called for a U.S.-backed pan-Arab coalition aligned against Iran, which, he says, is stoking “the fires of sectarian conflict and terror.” While that is certainly true, the same could be said of several other states in the region, including the one in which the president delivered his speech.

The president’s proposal is deeply flawed. What is happening in the Middle East today is largely a regional power struggle between Iran and Saudi Arabia. The conflict in Syria is a proxy war, not between the United States and Russia, as some American commentators have suggested, but between the two major powers vying for regional hegemony. By taking sides in the struggle, the administration will only prolong the agony. What is required instead is a kind of détente between Saudi Arabia and Iran, one that would rob their proxies of their reasons to keep fighting. The timing may be right for such an effort. Jean-François Seznec, a Middle Eastern expert at the Atlantic Council, told Voice of America late last year: “Having low oil prices is making life much more difficult for Saudi Arabia and Iran…. If there were a major military conflagration, it would ruin both of them, and I think they realize that.”

Does President Trump realize that? He says so, but his proposal says otherwise. President Obama recognized the need to reduce tensions between Tehran and Riyadh even if, ultimately, he lacked the courage of his convictions. But the current administration has conviction without understanding. Once again, in the neverending Middle Eastern quagmire, the United States has taken careful aim and shot itself right in the foot.

Here is another example of the editors not practicing what they preach. They are taking a political position so have become Catholics of a political party.

Saudi Arabia is in extreme financial jeopardy because of fracking in the US. They are willing to clamp down on terrorrism to get some relief. Trump realized this and went for a program that will hopefully eliminate the Sunni sponsors of terror such as Qatar and Saudi Arabia itself.

Instead we get a reflexively anti Trump position and one praising Obama whose policies have set the Middle East aflame by arming both ISIS and Al Qaeda and giving billions of dollars to Iran which they are using for military aggression. Yes, we armed both ISIS and Al Qaeda through intermediaries under Obama and Hillary Clinton.

Since about January, America Magazine seems to have taken a sharp turn to publishing articles that are primarily about social ethics. A quick look at the number of comments on the many articles this year show a dramatic decrease compared to issues on articles concerning sexual ethics. This is understandable since the chasm between received and not received teachings is most significant with respect to sexual ethics.

I find this particular article to lack the kind of details one would expect to find in a fair and balanced article on such a complex subject. For example, it can be easily argued that the foreign policies of Obama have caused an increase in the tensions and turmoil of the Middle East rather than anything Trump has done to date. While many can argue about the effectiveness and/or justification of both the Obama and Trump foreign policies, the editors here are being deliberately selective and, as such, this article is unfortunately intellectually unpersuasive.

Editors
You must be kidding... Oil prices are the key to ending tensions and you state Obama recognized the problem but did nothing?
Pres Obama instructed his EPA to impede "fracking" which process had been responsible for crushing the Arabian monopoly; he lifted oil sanctions on Iran which relieved all the financial pressure on that government and gave them billions in revenue; and he gave Iran $100 billion+|- in cash.
In addition Obama's restrictions on "fracking" enabled Russia to enjoy both higher oil prices and avoid the US shipments of Liquid Natural Gas that would have freed Europe from the Russian monopoly/price control of that fuel.
In short Obama's actions fueled the revenues of Russia and Iran which in turn allows them to support The Syrian Regime . If that were not enough he allowed the oil production in Iraq seized by ISIS to continue and provide significant revenues to support their reign of terror. It wasn't until the last months of his term that he permitted bombing of the ISIS transport of such oil.

If Trump "shot himself in the foot" , then I suppose it would be more appropriate to describe Obama as "Throwing Gas on the Middle East Fire"