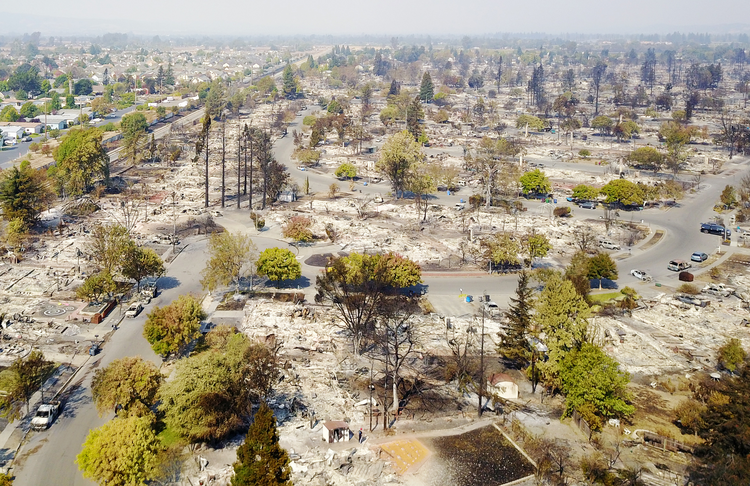 An aerial view of destruction in Santa Rosa, Calif., is seen on Oct. 11 after wildfires. (CNS photo/DroneBase, Reuters)

October is always a bad month in the fire season in northern California, but this year’s fires are already some of the worst in state history. California Governor Jerry Brown has declared a state of emergency and California National Guard units are joining firefighters from around the state battling to contain the flames. Cal Fire, the California Department of Forestry and Fire Protection, issued an update on Oct. 11 that said at least 21 distinct fires were burning in the area. The death toll has risen to 23, and more than 191,000 acres have been scorched and 3,500 structures burned. The toll may go higher. The AP reports that over 100 people in Sonoma County alone remain missing, and with the various fires still not contained the final count of property damage and casualty toll will be even more devastating.

The cause of the fires is still under investigation, though local news outlets, including the Woodland Daily Democrat, reported power lines downed by high winds could have been the culprit for some of them. Cal Fire reported the strong winds that have spread the fire “have decreased significantly, but local winds and dry conditions continue to pose a challenge.” Progress has been made in containing some of the wildfires, but it is unclear when they will be controlled beyond the threat of further expansion.

Bishop Robert F. Vasa of the Diocese of Santa Rosa wrote in a statement that parts of two Catholic schools in his diocese have been destroyed. He has been visiting those affected and working from his car, as his office is in a mandatory evacuation area.

Bishop Vasa called on all Catholics of the diocese to help their brothers and sisters who “have been severely impacted by the devastating fires and are in immediate need of your prayers."

“I have met numerous folks who are in shelters and who have no home to which to return. The sense of great helplessness is palpable,” the bishop wrote. “Santa Rosa is extremely smoky with the sun a mere red ball.”

The six-county Diocese of Santa Rosa includes four of the counties hit hardest by the fires—Sonoma, Napa, Lake and Mendocino. Bishop Vasa called on all Catholics of the diocese to help their brothers and sisters who “have been severely impacted by the devastating fires and are in immediate need of your prayers. Please do not hesitate to offer your help though ongoing prayer, donations, and emotional support.”

One of the schools damaged by fire is Santa Rosa’s Cardinal Newman High School. In a letter sent out to students’ families, the damage at Cardinal Newman was described as extensive. School officials toured the destruction and reported the loss of the library, the main office building and a number of classrooms. Other buildings, including the chapel, the science building, the gym and most of the recreational facilities escaped major damage.

All members of the faculty and staff are accounted for, but the school is now reaching out to gauge the status of the students and their families, some of whom have been forced to evacuate.

The fires have devastated the heart of California’s wine country, which depends on immigrant labor. Those farmworkers, many of whom may be undocumented, are also among those affected by the wildfires. The United Farm Workers union has been contacting its members and reports that many have been forced to evacuate with their families, though no injuries or fatalities have been reported.

The Davis Phoenix Coalition, a local group dedicated to combating prejudice, issued a statement calling on Californians to “remember to help everyone in this tragedy. Nearly every drop of Napa County’s world-class wine is produced by migrant labor.” Meanwhile, social media posts are circulating that offer a list of “sanctuary shelters” for those who may be worried about going to the official, government-run shelters. The posts reflect a concern among undocumented people escaping the fires that authorities tasked with helping could represent a deportation threat.

Many residents of Santa Rosa, the largest city in Sonoma County, were caught off-guard by the speed and severity of the fires when evacuation orders came. Some had only minutes to escape. The fires broke out on Sunday night, Oct. 8, spreading quickly because of strong winds that lasted into the next morning, making the fires difficult to contain.

Among the structures lost was the home of Sonoma County Supervisor Susan Gorin. “Folks, I thought I had defensible space around the house,” she said in a post on Facebook. “The juniper bushes were going to go this year, but they just exploded, torching the rear of the house and then the entire house. Not much left will be there to sift through.” Ms. Gorin added, “Be safe, we are not through with this fire.”

Residents shared stories of heartbreak, loss and narrow escapes on Facebook and Twitter. Some calls for help also went out on social media. “If anyone has a horse trailer, Chalk Hill Ranch near Healdsburg needs emergency help. They have 54 horses in dire need of transportation off the ranch,” read one desperate post.

Locals across the region sprang into action, with people driving these fortunate horses to safety, mostly to the old Solano County fairgrounds, which had been slated for demolition but have proven to be a welcome animal sanctuary and the focus of a strong civic response. Alicia Hunt, of neighboring Yolo County, told America, “I had a trip planned to go drop off donated hay tomorrow [at the fairgrounds], but I was too late because all the donation needs were met in only 2.5 hours!”

In his published statement, Bishop Vasa expressed his appreciation to the volunteers “spending countless hours showing their desire to share in the suffering of those displaced by the fire,” as well as to first responders and law enforcement. “This will test your patience as well and I commend you for that patience...Persevere!”

The resilience of Northern California communities, which have faced severe fires before, was clear as volunteer efforts quickly began in response to the crisis. A Monday night call for volunteers by the City of Santa Rosa was met within hours; so many came to help that some were turned away.

The AP reported that Vice President Mike Pence, who was in California fundraising as the fires broke out, quickly pledged the Trump administration’s support for California. On Oct. 10, President Trump approved Governor Brown’s request for federal assistance. “The Federal Emergency Management Agency has responded promptly to assist California in fighting these terrible fires. I appreciate the fast response from the president,” Governor Jerry Brown said in a statement. For those trying to decide how to help, the Sacramento Bee has compiled a resource guide. For the latest updates on California’s fires, visit Cal Fire’s website.