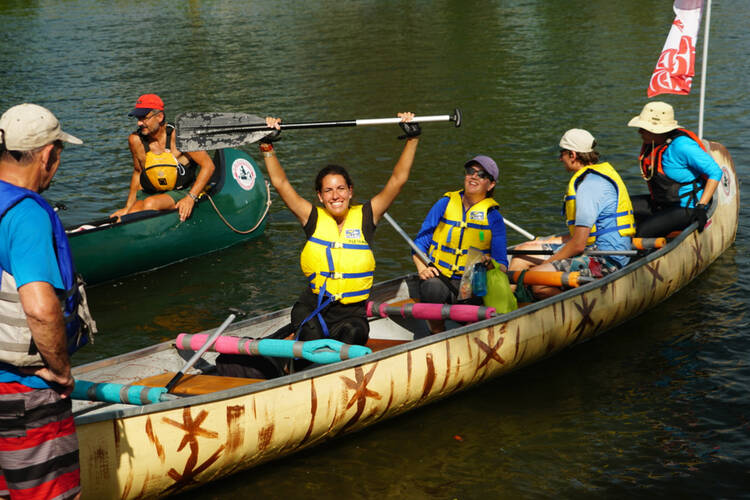 Arrival at Kahnawake on Aug. 15. Photo courtesy of Dominik Haake.

“I was about 10 years old, and we were playing on the shores of Georgian Bay,” recalls Sister Eva Solomon, an Anishinaabe Sister of Saint Joseph. “My brothers and I, and my sisters, we were running on the big granite stone along the shoreline.

“All of a sudden, I stopped. And I looked at the water and I realized: I can get in a boat right here on Georgian Bay, and I can go anywhere in the world. That means anything is possible for me. Anything at all.”

That powerful memory came back as Sister Solomon spoke about her participation in a recent canoe pilgrimage organized by the Jesuits’ English Canada Province. Departing from the shores of Ontario’s Georgian Bay, 28 core canoers and many drop-in participants paddled nearly 900 kilometers, over 500 miles, to land in Montreal. The journey took 26 days, following a route first traveled by indigenous people and later by 17th-century fur traders, known as voyageurs.

For Sister Solomon, the trip fulfilled a youthful sense of adventure and swelling possibilities, shoving off from her childhood homeland. “I said [I can go anywhere] when I was 10, and here I was at 74 years old,” she says, finally traveling a river rich with history.

The idea for the pilgrimage started a few years ago, when a group of young Jesuits learned about a similar pilgrimage along the same route undertaken by the order 50 years ago. In 1967, the Jesuits paddled to celebrate the 100th anniversary of Canada’s confederation, promoting ecumenical dialogue and paddling through Expo 67, the world’s fair, in Montreal. Sister Solomon had wanted to go on the pilgrimage back then, but it was not open to the laity.

This time around, for Canada’s 150th anniversary, which has been met with frustration by indigenous people, the Jesuits had another dialogue in mind. “We very quickly realized one of the key pieces of the project would be working towards reconciliation here in Canada between indigenous people and Canadians,” says Erik Sorensen, a 27-year-old Jesuit in formation who helped coordinate the pilgrimage.

For Canada’s 150th anniversary “we very quickly realized one of the key pieces of the project would be working towards reconciliation here in Canada between indigenous people and Canadians.”

Those efforts have been underway for a few years following Canada’s Truth and Reconciliation Commission, which listed special calls to action for Catholics in Canada, particularly concerning the legacy of residential schools. In 2015, the commission concluded that residential schools, where over 150,000 indigenous children were forcibly sent after being removed from their families and communities, “were used as a tool of assimilation by the Canadian state and churches. Thousands of students suffered physical and sexual abuse. All suffered from loneliness and a longing to be home with their families.”

Those schools are part of Sister Solomon’s life. Both of her parents were forced to attend a Jesuit-run residential school in Spanish, Ontario. Growing up, she says, her attitude toward the Catholic Church was shaped by her parents’ conversations. “Sometimes my dad would get very angry, and he had reason for that. And then my mother would say, ‘Yes, but remember so and so? He made sure that every one of us had a toy at Christmas,’ or whatever it happened to be. So she’s kind of always balanced off the negative that my dad was speaking with the positive that she was speaking. There was a lot of good reason for that different talk.”

Sister Solomon says she understands her father’s anger. He lost his own father when he was 14, forcing him, the oldest sibling of nine children, to stand in as a parent. Being forced to go to Catholic boarding school in the midst of that transition made for a heavy burden. Despite her father’s bad experience with church institutions, Sister Solomon says she knew from the time she was 4 years old that she would become a sister.

Throughout her childhood and teens, she considered a variety of contemplative orders, but a specific moment catalyzed her desire to work within indigenous communities. In 1969, her uncle was beaten and left in a ditch after a community dance. He was found alive but unconscious.

Sister Solomon would visit her uncle in the hospital, and it was there in prayer where she found a calling. “I was standing at the foot of his bed and asking, ‘Why is it that we, as native people, do this to ourselves? We beat each other, and we kill each other and we kill ourselves. Why?’ And I knew he was drinking when this happened, but I still said alcohol is not the problem, it’s the symptom.

On the pilgrimage, with these experiences and that ministry in mind, Sister Solomon talked to the group about reconciliation. Mr. Sorensen said that though they set aside time for dialogue and listening, “a lot of the exchanges were very informal and personal between people.” He recalled one meaningful conversation he had with a young indigenous canoer who said that while he never went to a residential school himself, the effects of the schools are still very present in his community.

Mr. Sorensen says this pilgrimage is not the last effort he intends to organize to continue fostering opportunities of reconciliation. “Catholics have a great awareness of global injustices,” he says. “I’d like to see that same level of engagement on issues of injustice here in Canada, especially on the issue of residential schools and ongoing inequalities in indigenous communities.”

For Sister Solomon, the pilgrimage was a good example of one way some people might be able to work toward reconciliation together. It was also, however, a way of going home, living her identities as a Catholic sister and an Anishinaabe woman, getting a second chance at a trip she wanted to go on 50 years ago. “I knew the water there, on Georgian Bay,” she says. “I knew the unpredictability of it and so on. We ended up having to be rescued, but that still didn’t bother me because I was familiar with that kind of experience. It just felt like it was so good to be home on that water.”