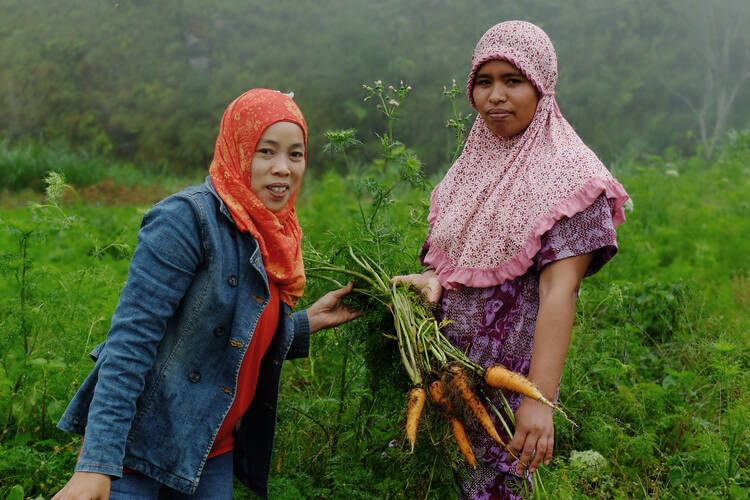 When a 7.8-magnitude earthquake hit Nepal in April of 2015, no one could have anticipated the carnage to follow. Thousands of people lost their lives and even more were injured in the event, which was followed by 120 aftershocks, including one that measured 7.3-magnitude itself.

Over the next four months, global aid networks mobilized, including Development and Peace, an agency of the Canadian Conference of Catholic Bishops dedicated to evangelizing Canadians and addressing the root causes of suffering in the global south. It reached nearly 200,000 people in the four months immediately following the earthquake and helped rebuild lost infrastructure, aided in economic and agricultural recovery and combated human trafficking, raising $4.8 million from its members and supporters. The Nepal response was just one of the many initiatives Development and Peace described in its annual 2015-2016 report, which includes stories of aid to Syria, the Philippines, Ecuador and more.

In 1967, following their experiences at the Second Vatican Council, the bishops of Canada came home determined to help Catholics in their country understand and address the problems of drastic poverty and oppression around the world. Responding to Pope Paul VI’s encyclical “Populorum Progressio,” the Canadian Conference of Catholic Bishops established Development and Peace, now a member of the church’s global relief and development service, Caritas Internationalis. The agency has cultivated networks of solidarity around the world, launched impressive public education projects in Canada and worked on advocacy campaigns and thousands of economic and community development projects on behalf of the world’s most vulnerable people.

Over the past year, Development and Peace marked half a century of Canadian solidarity with people in the developing world with creative projects and a retrospective look at some of its most significant campaigns. Danny Gillis, who has been with the organization for 25 years and currently serves as the coordinator for the 50th anniversary programming, says the celebration aims to involve the members of Development and Peace and have them reflect on what solidarity means to them.

“We had a pilgrimage where we had every diocese create a 2-foot by 2-foot quilt patch that would represent their understanding of solidarity and express something about where they come from in Canada,” says Mr. Gillis. The pilgrimage traveled through 57 dioceses and collected 64 patches for the quilt, which were presented to bishops during local Masses. Eighteen more were contributed by partners in the global south.

Canada's Development and Peace has launched thousands of economic and community development projects on behalf of the world’s most vulnerable people.

“They’re really works of art,” says Mr. Gillis. “We had all the people who did the patches express what the symbolism was. It’s really great to see the depth of understanding people have about solidarity.” All the patches will come together for the first time on Sept. 26th, during a special Mass in Ottawa, the nation’s capital.

Involving its members is not unusual for Development and Peace. Members serve as active coordinators and educators rather than passive recipients of content. They also contribute to the governing of the institution, including electing representatives to committees, diocesan councils, regional assemblies and its National Council.

Since it was founded, Development and Peace has raised over $600 million in over 100 countries. Its first Share Lent fundraiser, a campaign that educates Canadians about international development, raised $1.35 million for 77 projects in 32 countries in 1968.

Those fundraisers have continued, including this year’s campaign “Women at the Heart of Change.” That program highlights the role of women in social, economic and environmental development. Development and Peace hopes to raise $8 million for solidarity work around the world. In addition to the quilt, a book entitled Jubilee: 50 Years of Solidarity, an edited volume that features 50 different writers reflecting on the work of the organization, was published this year.

“In the last 10 or 15 years we focused a lot on natural resources; water, mining, agriculture and land,” says Mr. Gillis. Most Rev. Douglas Crosby, O.M.I., the bishop of Hamilton and president of the Canadian Conference of Catholic bishops, cited a campaign by Development and Peace on Canadian mining practices as a motivation for a recent letter sent by the Canadian bishops to Prime Minister Justin Trudeau.

One campaign that sticks out, says Mr. Gillis, is a 1998-99 attempt to prepare for a global debt cancellation effort in 2000. “Pope John Paul II had expressed his desire that Third World debt could be canceled, so countries could put more money into education and health concerns,” Mr. Gillis recalls. Development and Peace joined with other Christians to form The Canadian Ecumenical Jubilee Initiative, which collected 640,000 signatures for a petition to the Canadian government to cancel foreign debts to poor nations.

“That was significant because this was pre-internet,” says Mr. Gillis. “We had always been good at getting signatures on paper. For this we joined a worldwide effort where over 20 million signatures around the world were collected. Development and Peace collected 460,000 signatures [out of the total 640,000 in Canada], which was a record for the number of signatures on any petition in Canada.”

The campaign was successful. Canada was the first developed country to cancel the debt owed to it by struggling countries.

“We met with the finance minister a number of times,” says Mr. Gillis. “He was a Catholic and agreed this was an important gesture for the Jubilee. He took a lead role at the G7 as well. It wasn’t a complete cancellation; the [International Monetary Fund] and the World Bank like to keep their leverage over these countries, but there were a lot of debts cancelled and it made a difference at the local level.”

Though these attempts to galvanize Canadians within Canada have been important for the work of Development and Peace, Mr. Gillis says the organization has a robust understanding of partnership with other organizations and individuals too. “Over the years, we have begun working with groups that really understand the nature of the problems that people face and the assets that they have.”

Partners from developing nations come to Canada to educate parishioners and help them understand the struggles that are happening from an on-the-ground perspective, while Canadian members take solidarity trips to visit partners in other parts of the world, putting faces and places to issues they may have learned about through Development and Peace initiatives.

The 50 year celebration is not simply nostalgic. Development and Peace has continued to organize campaigns in the last year and has plenty of work ahead of it. Ecology has become a growing area of significance in light of Pope Francis’s encyclical “Laudato Si’.”

Mr. Gillis says problems facing Canada’s indigenous communities are also becoming significant for Development and Peace. “This is something that has really bubbled up from our base, our membership. I was at three of the regional meetings this spring and all of them had a big emphasis on indigenous people in Canada.”

An advisory circle including indigenous and non-indigenous people will help the organization navigate the next steps. “It’s very sensitive, we don’t want to just jump in with both feet but be respectful and take it slow, build relationships.”

Intentional relationships have been the key to the success of Development and Peace. As it looks to building solidarity with those inside the borders of Canada as well as outside, partnerships with indigenous people extend a mission that has resulted in an impressive resume of work for peace that has characterized Development and Peace over the last half a century.