As U.S. focuses on Harvey and Irma, Catholic Relief Services works on world’s other crises 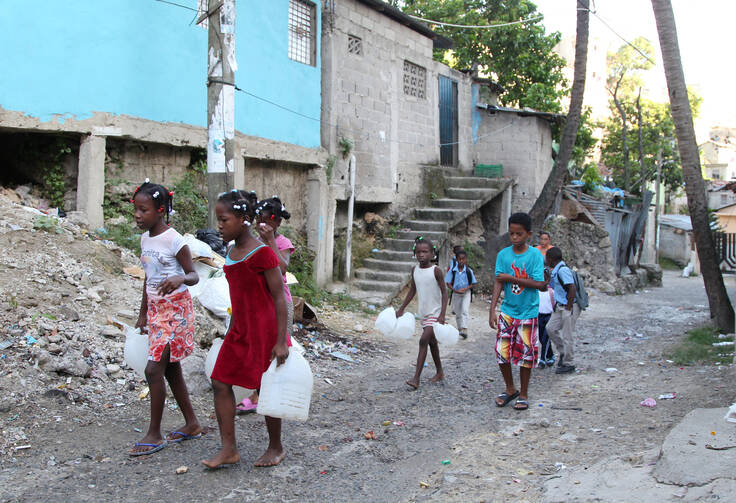 With Hurricane Irma menacing South Florida, Catholic Charities USA and other U.S. disaster response agencies were preparing yet another emergency response even as they continued to grapple with the ruin Hurricane Harvey wrought on Texas and Louisiana. Catholic Relief Services officials, for their part, were tracking Irma with an eye on its likely impact on three nations where it works as the overseas relief and development agency for the U.S. church—the Dominican Republic, Haiti and Cuba.

Mark Melia, executive vice president for Charitable Giving at C.R.S., says a hard hit on Haiti would be especially devastating. “It’s a threefold emergency for Haiti,” he says. Haiti is the poorest nation in the Western Hemisphere—among the poorest countries in the world—he explains, and there are not a lot of government resources available to respond to natural disasters. Haiti is also still recovering from Hurricane Matthew’s 2016 strike and a devastating earthquake in 2010. Haitians would be especially vulnerable to Irma’s power and in a recovery would be forced to strip whatever materials they could from Haiti’s already badly denuded countryside.

“We’re monitoring [Irma]; it looks like the [hurricane’s] cone is going to brush the northern part of Haiti, the Dominican Republic and Cuba,” he says.

“We have people on the ground in all three places, and we are preparing an emergency response in cooperation with local partners, Caritas Internationalis and local government.” Mr. Melia adds that C.R.S. has already begun raising money to pay for that effort.

Irma, a category 5 hurricane, is being rated among the most powerful ever recorded in the Atlantic. It has already left thousands homeless and killed at least 10 people on small islands in the eastern Caribbean, including an infant on the island of Barbuda. More than 1 million were left without electricity in Puerto Rico.

Remembering the church’s call to solidarity, a C.R.S. official asks only that as Americans reach out to assist their fellow citizens they continue to remember “our brothers and sisters around the world who are also in need.”

Irma was forecast to churn off the coast of Hispaniola, shared by the Dominican Republic and Haiti, on Sept. 7 before heading toward the Bahamas and Cuba, eventually nearing the Florida coast Sept. 10, according to the Miami-based National Hurricane Center.

But C.R.S.’s ongoing global relief and development work this week is not limited to preparing for Irma. In South Asia more than 1,400 have been killed and more than 41 million dislocated by floods and landslides that have followed an unprecedented drenching during monsoon season.

In India, C.R.S. staff are on the ground and in Nepal and Bangladesh C.R.S. is assisting Caritas, the church’s global relief and development agency, and other local groups. At the other end of the climate crisis spectrum, he says, C.R.S. is continuing to respond to drought and conflict-related famine in Somalia and Kenya and hunger and a refugee crisis in South Sudan. A murderous landslide in Sierra Leone also drew a recent C.R.S. response.

The problems are many, and the donors? Well, they are not few, but they may be distracted by storms closer to home. That is perfectly understandable, Mr. Melia says, adding that C.R.S. staff hardly begrudge the donations landing at Catholic Charities USA as it ramps up a response to Harvey and Irma.

After Harvey, Texas towns try to pick up the pieces
Jan-Albert Hootsen

“We have in fact been redirecting donors to Catholic Charities,” he says. The two U.S. Catholic agencies sometimes get jumbled by donors. Catholic Charities USA is the church’s domestic charitable arm, responding to social needs and emergencies within the United States, while C.R.S. is focused outward, providing humanitarian and development aid where it is most needed around the world.

As the United States has dealt with its own crises and while Hurricanes Harvey and Irma have captured the lion’s share of U.S. media’s attention in recent days, U.S. donors have directed millions to Catholic Charities USA while thousands of dollars continue to flow to Catholic Relief Services. Mr. Melia acknowledges that C.R.S. relies on steady donations to assist in its work but understands why many Americans may be focusing inward just now.

“We don’t in anyway begrudge anyone who is responding generously to needs after a disaster,” he says, adding that the needs in the Houston area are substantial “and it looks like there will some real needs in Florida.” He says many of the people getting help in Texas and perhaps Florida—at press time Irma’s U.S. course remained unclear—are regular donors themselves to C.R.S., “and we hope that they are O.K.”

Remembering the church’s call to solidarity, one frequently reinforced by Pope Francis, he asks only that as Americans reach out to assist their fellow citizens, they continue to remember “our brothers and sisters around the world who are also in need.”

The bottom line, he says, “is please give generously” as these overlapping crises unfold.

“Could we use more donations? Absolutely,” he says. “There are tremendous needs, and I can guarantee you that any donation we receive will be put to good use to assist people facing similar situations [overseas].”

Natural disasters like hurricane, storms, earthquake and floods can be very disruptive and cause much damage. The nonprofit organizations like mission humanitiare (www.mission-humanitaire-afrique.org) work in support of aid plans and help the affected people. To save humanity, and individual do charity and help the victims and work for the social welfare.