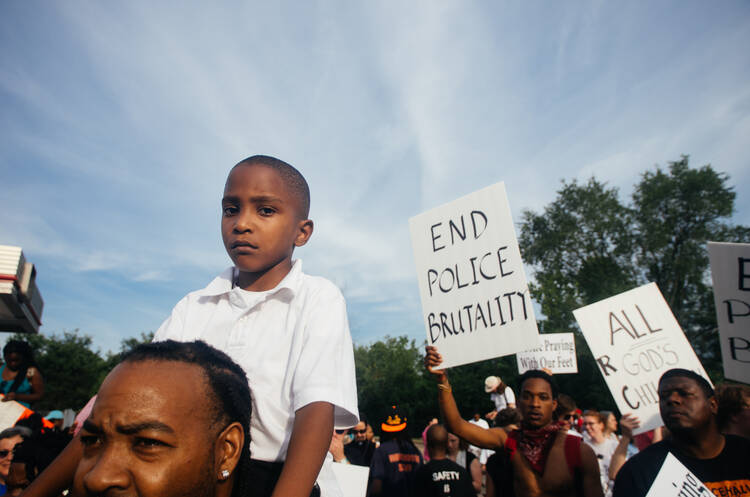 President Trump has managed what few others could achieve, giving activists on both sides of the Black Lives Matter-Blue Lives Matter divide something to agree on. In his remarks to law enforcement officers gathered at the Suffolk County Community College in Brentwood, N.Y., on July 28, Mr. Trump encouraged police not to worry about roughing up “thugs” when getting them into a squad car. While several officers could be seen laughing and clapping behind the president, there has been near universal condemnation of Mr. Trump’s comments by the law enforcement community as well as civil rights groups.

There has been near universal condemnation of Mr. Trump’s comments by the law enforcement community as well as civil rights groups.

Mr. Trump’s remarks come at a critical time for police-community relations. A recent Gallup poll showed a return to a 25-year average of confidence in the police after several years of unrest and declining approval in the wake of high-profile police shootings in Ferguson, Mo., North Charleston, S.C., and Cleveland, Ohio. Today, 57 percent of Americans say they have “a great deal” or “quite a lot” of confidence in law enforcement. But those gains mask continued mistrust of the police among minority communities. Since 2014, confidence in law enforcement officials has dropped 5 percentage points among African-Americans (to 30 percent) and 14 percentage points among Latinos (to 45 percent).

Whether or not the president was joking, as his spokeswoman Sarah Huckabee Sanders has claimed, police chiefs from California to Florida said that Mr. Trump’s tacit approval of breaking the law did them no favors in their work to rebuild community trust. Charlie Beck, the Los Angeles police chief, tweeted in response that police misconduct “serves only to undermine the hard work and sacrifice they make to keep this city safe.”

The police know better than politicians that repairing relationships with the neighborhoods they serve will do much more to improve public safety than roughing up a few suspects. But there are less utilitarian reasons to fight police brutality as well. Brutality, corruption and an “us-versus-them” mentality in the ranks undermine what is for many officers a sincere vocation to protect and serve.

Pope Francis recognized the importance of that vocation in a speech marking the 200th anniversary of the Italian police force in 2014. The vocation of police officers, the pope said, “is expressed in service to others and commits you to correspond every day to the confidence and esteem that the people place in you.” A vocation of service can never simply be against criminals; it must be on behalf of communities.

It is easy to take something Trump said and conflate it as reflective of his intention or end. Sometimes what he says is his end. However, not everything. His recent remarks to North Korea is good example of this where the Media and Democrats to criticized him by presuming he meant that a North Korean 'threat' will result in military action by the U.S. Even most of those who say 'such talk does not help reduce tensions' are being disingenuous. Most of these comments mask their political bias.

I don't like Trump's rhetoric and his off-the-cuff remarks. Let's face it, he is much more Presidential when he sticks to a script. However, he was elected President because the people want a sea change in Washington where politicians cannot agree on anything. I admit his 'style' is not my style but to minimize or not recognize the unfair criticism of the media and Democrats on everything he says or does, encourages an us-versus-him narrative.

With respect to the title of this article, it can be argued that St. and Pope JP II created a us-versus-them mentality and culture with his views from his belief in the role of women to theologians who disagreed with his philosophy and theology. Any priest who publicly announced that a teaching, such as Humane Vitae should be the subject of a rethinking, would never be made a bishop. Bishops who did the same would quickly be removed from office. However, while I respect St. and Pope JP II, I disagree with him on many issues for good reasons. Even Pope Francis is being criticized by those who disagree with his vision for the Church.

I think most Catholics are fed up with all the criticism, bias and exaggeration in politics or theology. This does not mean that those who disagree should keep silent. Witness the fact that it was in disagreement that many teachings that were taught as truth for centuries by the hierarchy were eventually changed. Even in politics, it is through dialogue that we do the people's business. Nevertheless, we need to take a more positive, mature, balanced and high road approach to those who we disagree with...and that includes Trump.

The universal condemnation was not by beat cops but by chiefs whose job can be ended by a mayor if he doesn't say the politically correct thing to the media. Neither Trump nor the chiefs are important in their comments and beat cops know Trump does not have their back if they do the wrong thing. The issue is homework in the ghetto and men staying with one woman until death. Where you find that, you find non criminal happy black families. But if the Church can't witness against ghetto non marriages and musical beds and women with children from four different men, then the Church is hiding from the hardest work...rebuke of the poor. Christ did that when He asked where were the other nine lepers he cured who didn't thank Him. Christ did it when He told the man he cured of 38 years of paralysis..." go and sin no more lest something worse befall thee". The man then immediately snitched on Christ to the Jewish elders. Tough work...telling the poor not to sin. Christ did not romanticize the poor. The Church now does. The number of blacks killed by other blacks per year and killed by abortion is blindingly higher than unjustified cop shootings of black men. But it's verboten to say it or type it. Police departments often get men who opted out of college and then end up joining the force by default and by not liking any profession greatly. No one will say that either. So we talk about Trump or slavery or anything not right on the money.

Unfortunately, Trump’s comments come as no surprise given his base.

The "us versus them" rhetoric started decades ago thanks to the Democrats, liberals and atheists: eg. church vs state", Chief Justice Earl Warren of SCOTUS vs America's Founding Fathers, and the hateful 1964 TV ad by President Lyndon B, Johnson featuring a little girl plucking a daisy with a nuclear bomb detonating depecting life under his political rival Barry Goldwater

And then there is Hillary's deplorable "deplorable" swipe - twice - at half of Americans. They rewarded her hate by depriving her of her "rightful" throne

The rhetoric, dear Editors, has been burning America for decades. Where have you been?
Ah, publishing divisive articles.

AMDG and all that

I think that Trump or another politician acted the same way.
I agree with the Michael comment. After that, he must forget about the peace agreement.
We must think about ordinary people.