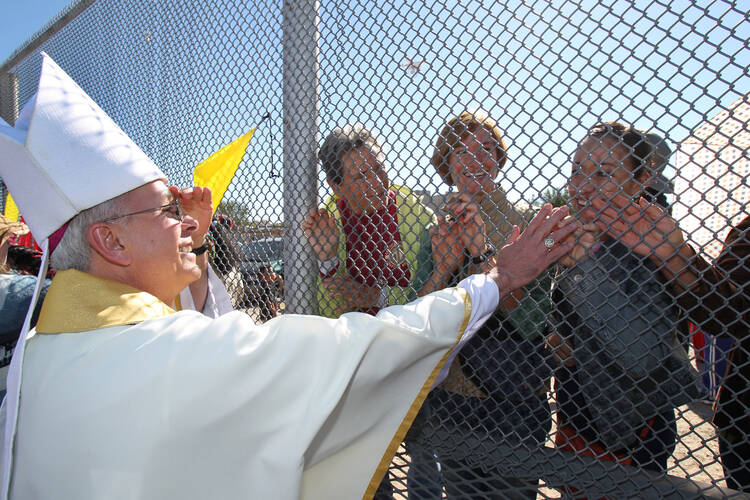 The bishop whose diocese sits on the stretch of the U.S.-Mexico border visited by Pope Francis last year is urging Catholics and elected officials to take action against “a dark night of fear and uncertainty” facing undocumented migrants currently living there.

“Our border community knows the reality of a broken immigration system,” Bishop Mark J. Seitz of El Paso writes in “Sorrow and Mourning Flee Away,” a pastoral letter published on July 18. In it, he condemns “the militarization of our border” and he calls for a “moratorium on the deportation of non-violent immigrants” until comprehensive immigration reform is enacted.

Bishop Seitz also announced the creation of a scholarship program for undocumented immigrants brought to the United States as children, known as Dreamers, to attend Catholic schools, and he announced that U.S. Immigration and Customs Enforcement and Border Patrol officers would not be allowed on diocesan property without a warrant.

“Our border community knows the reality of a broken immigration system,” Bishop Mark J. Seitz of El Paso writes in “Sorrow and Mourning Flee Away.”

The letter, which the bishop describes as “just the beginning of a deeper solidarity with the poor and excluded,” comes as Texas prepares to implement a new law aimed at dismantling so-called sanctuary cities as the Trump administration moves forward with plans to build a wall along the U.S.-Mexico border. In May, Catholic bishops vowed to continue fighting many Trump-backed immigration policies, and the mandate for a temporary working group of bishops focused on migration was renewed by Cardinal Daniel DiNardo, president of the U.S. Conference of Catholic Bishops and archbishop of Galveston-Houston.

Bishop Seitz told America he wrote the letter because immigration is “a topic that is on the minds of many in our country. Sometimes it feels like the narrative of those who say that immigration is the cause of every problem in our country and that the border is a fearful place seems to be winning out.”

In reality, he writes in his pastoral letter, the border is “beautiful, rich in history and culture, faith and natural wonder.”

“This is a place where people of many cultures, languages and nationalities coexist and thrive,” Bishop Seitz said. “I ask lawmakers and policymakers in other parts of the country to end the demonization of our border, our border residents and migrants.”

He said that people living in his diocese tell him that fear among immigrant communities living on the border is on the rise.

Discussing the plight of contemporary undocumented immigrants, he said, “They’re afraid every time they leave home, even to come to church sometimes.

“I was approached by a number of teachers, not only from our area but beyond, asking for advice: What do I tell my children who come to school crying, fearful that their parents won’t be there when I return from school? They said that they’re even seeing kids having panic attacks and things like that.”

Much of the 13-page letter is addressed to El Paso Catholics directly. “As your pastor, I cannot ignore the stumbling block of a system that causes so much suffering among God’s people,” the bishop writes. “Misguided policies and walls are widening the divide between us and our sister city of Ciudad Juarez, deportations are separating parents from children, and harsh political rhetoric is causing fear in our parishes and neighborhoods.”

He calls on priests and parishioners to fight “the evil of family separation” and the expansion of for-profit detention centers, promoted by the president in an executive order issued in January. Bishop Seitz also talks about the need to fight drug abuse, which has been linked to an increase in crime along the U.S.-Mexico border, as well as “the mistreatment of asylum seekers and the disparagement of our Muslim brothers and sisters.”

The Texas law that will punish cities and counties that refuse to cooperate with federal immigration officers is set to go into effect on Sept. 1. According to the Houston Chronicle, the law mandates that local police inquire about immigration status during routine stops, and it levies fines and penalties on sheriffs and police chiefs who refuse to cooperate. Several counties are suing the state over the law, and earlier this year bishops in Texas voiced opposition to it.

Cardinal Joseph Tobin of Newark called efforts by the Trump administration to crack down on sanctuary cities “the opposite of what it means to be an American.”

In his letter, Bishop Seitz writes about the practical effects of the law, which he says would raise “the spectre of a mass deportation force,” and he writes the larger community will be affected, as undocumented immigrants may be too afraid to call the police to report crimes.

“In the past undocumented people didn’t feel threatened by local police; they felt they could report a crime if they were the victims of one,” he writes.

Bishop Seitz, who was appointed bishop of El Paso in 2013, also offered something of a preemptive rebuttal to critics who might say the letter is too political.

“There may be those who question whether in these reflections I am not substituting politics for the teaching of the Church,” he writes. “I answer that as a pastor my duty is to the Gospel of Jesus Christ.”

He stopped short of joining the so-called sanctuary church movement, in which some houses of worship have promised to shield undocumented migrants from immigration officials, writing that he “would not offer false expectations of protection” to those facing deportation. Several other Catholic leaders have expressed similar caution about the practice.

Bishop Seitz told America that the diocese lacks “ways to protect those people” who are facing deportation. Instead, he said, the diocese plans to train lay volunteers who will be part of a “rapid response team” prepared to help at-risk individuals navigate the legal system should they face deportation.

“We’re going to offer a course through our lay institute that trains people as advocates,” he said. “Part of that will be informing them about the protections that they have under the law, like the right to remain silent, that they don’t have to let agents into their house without a search warrant and how to prepare families in case something should happen.”

Part of the letter is aimed at individuals charged with carrying out federal immigration policy, officers on the front lines who are often nonetheless part of the local community.

“Those who administer our nation’s immigration laws daily face difficult and sometimes dangerous situations,” Bishop Seitz writes. “I appeal to you, do not ignore the obligations of conscience! Treat all you encounter with dignity and respect and with the American values of fairness and justice.”

Bishop Seitz said many law enforcement officers could become more torn about which orders to carry out as immigration policy becomes “more extreme.”

“Many of those who work for border patrol and I.C.E. in our area are people who grew up in this region, and they tend to have a much more balanced perspective than someone who perhaps just doesn’t know the reality of living on the border and how interdependent we are,” he said.

He said officers facing moral quandaries about carrying out orders that might break up families should “evaluate the situations as they arrive and some further prayer and conversation would be necessary to help each person in a particular area of responsibility make a moral decision.”

During his apostolic visit to Mexico in 2016, Pope Francis celebrated Mass in Juárez, just across the Rio Grande from El Paso. Before that celebration, the pope faced the United States and silently prayed for individuals who lost their lives trying to enter it. A crowd of children in U.S. custody sat on the El Paso side of the river to pray with the pope.

Bishop Seitz said the situation has only grown more urgent since that prayer service.

“There’s much more fear now and many more threats,” he said. “We were aware that [the Obama administration was] deporting more people than anybody else before them, but at least in general people felt a lot more safe if they were not criminals. Today, everyone feels threatened.”

We need to openly admit that the Elites who will not hire American Citizens to be their Nannies/Maids/Gardeners are the one's who prevent Immigration Reform along with the businesses that hire un-documented immigrants and then treat them like 'wage-slaves'.

Let us create a national data base for jobs.
Enforce the laws on employment, work-safety, and offer those
jobs that Americans will not take to "Guest-Workers" who do not
violate the immigration policies. Then make sure that these
"Guest Workers" are not abused by their employers and that they pay
taxes into supporting schools and hospitals they may use.

Thank you! There is no reason to be hiring Illegally. None