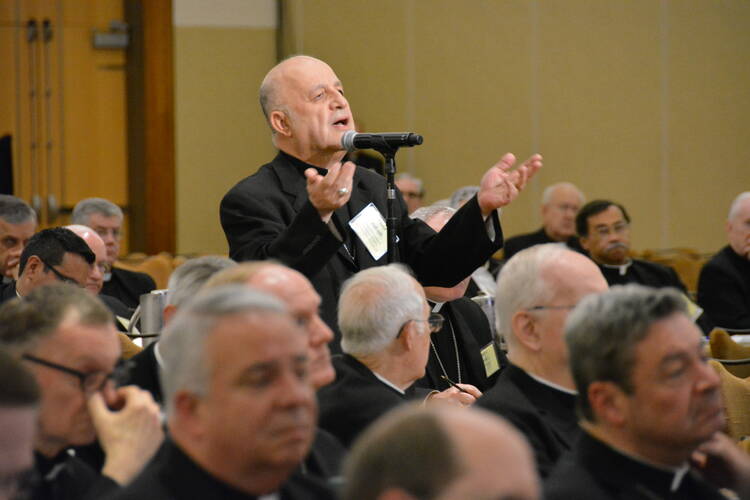 A day after a temporary group addressing recent threats to immigration concluded its work, Catholic bishops voted on Thursday to create a new permanent committee aimed at addressing religious freedom issues in the United States.

The contrast of the two moves—ending a temporary task force on immigration policy as the global refugee crisis continues while creating a permanent religious liberty committee when the goals of the ad hoc committee appear within reach—generated a vigorous debate among bishops gathered for their spring meeting in Indianapolis.

Some bishops expressed concern that allowing the immigration group to dissolve would send a signal that bishops had retreated from the issue. Later in the day, the head of the U.S. Conference of Catholic Bishops appeared to agree, releasing a statement announcing that the immigration working group would continue, citing the “the continued urgency for comprehensive immigration reform, a humane refugee policy and a safe border."

Meeting in Indianapolis for their spring meeting, the bishops voted 132 to 53 to make permanent an ad hoc committee formed in 2011 by Cardinal Timothy Dolan, who was then president of the U.S. Conference of Catholic Bishops.

The vote was not without controversy, however, as evidenced by floor comments from close to 20 bishops, including four cardinals.

On June 14, bishops heard a report about an ad hoc working group on immigration issues. That group began its work in November, after the election of Donald J. Trump, who during the presidential campaign promised to crack down on migration. It wrapped up its work this month. Bishop Robert McElroy of San Diego took to the floor during that discussion, arguing that letting the working group dissolve could send a signal that bishops were retreating on immigration.

During Thursday’s debate on the religious liberty committee, a member of the ad hoc group, Bishop Christopher Coyne of Burlington, Vt., said he was concerned letting the immigration working group come to a close while establishing a permanent committee on religious freedom sent a bad message.

Cardinal Joseph Tobin of Newark agreed, calling the timing “very unfortunate” and saying the vote to create the permanent committee would “send a message that the conference is actually disengaging” on migration issues, calling it “a crisis that is growing stronger each day.”

“Religious liberty remains under challenge, and it’s likely these challenges will intensify in the years ahead,” Archbishop William Lori said.

The religious liberty committee was created during a clash with the Obama administration, during which some Catholic universities, hospitals and dioceses argued that provisions of the Affordable Care Act violated their religious freedom.

The committee has been chaired by Archbishop Lori since its inception. During a presentation on Thursday, the archbishop said “religious liberty remains under challenge, and it’s likely these challenges will intensify in the years ahead.”

Archbishop Lori said that while the church’s opposition to the Department of Health and Human Services contraception mandate appears to be headed toward a resolution, he believed other issues, including newly gained rights for transgender individuals and the legalization of same-sex marriage in 2015, required a standing religious freedom committee “ready to address new challenges as they arise.”

Other bishops were concerned about how the new permanent committee would be funded.

Archbishop Lori told the bishops that the new committee would be budget neutral, but Cardinal Blase Cupich of Chicago took to the floor to note that the committee has received more than $500,000 in outside funding since its inception. He asked if those donations would continue.

Archbishop Lori said he was “quite confident” that outside funding would continue to support the committee in the years ahead.

Bishop Coyne said he was concerned that establishing the permanent committee could put bishops on the hook for funding should donations dry up.

“The funding is not permanent. It can go away,” he said. “Money and funding can disappear for all kinds of reasons.”

Two prominent cardinals, however, spoke in favor of creating the permanent structure.

Cardinal Donald Wuerl of Washington said he supported the proposal because “the challenge to religious liberty is a growing one.”

“In my contact with brother bishops throughout the world, they look to us in the United States to be real quarterbacks when it comes to the defense of religious freedom,” he said.

After the vote, Bishop Jaime Soto of Sacramento asked if the migration working group might continue its work. Cardinal Daniel DiNardo, head of the U.S.C.C.B., said he believed the group would continue to meet informally and that he would consider creating another ad hoc working group. On Thursday, he announced in a press release that the group’s work would continue.